No. 21 LSU Sweeps No. 2 Alabama in SEC Opener Doubleheader 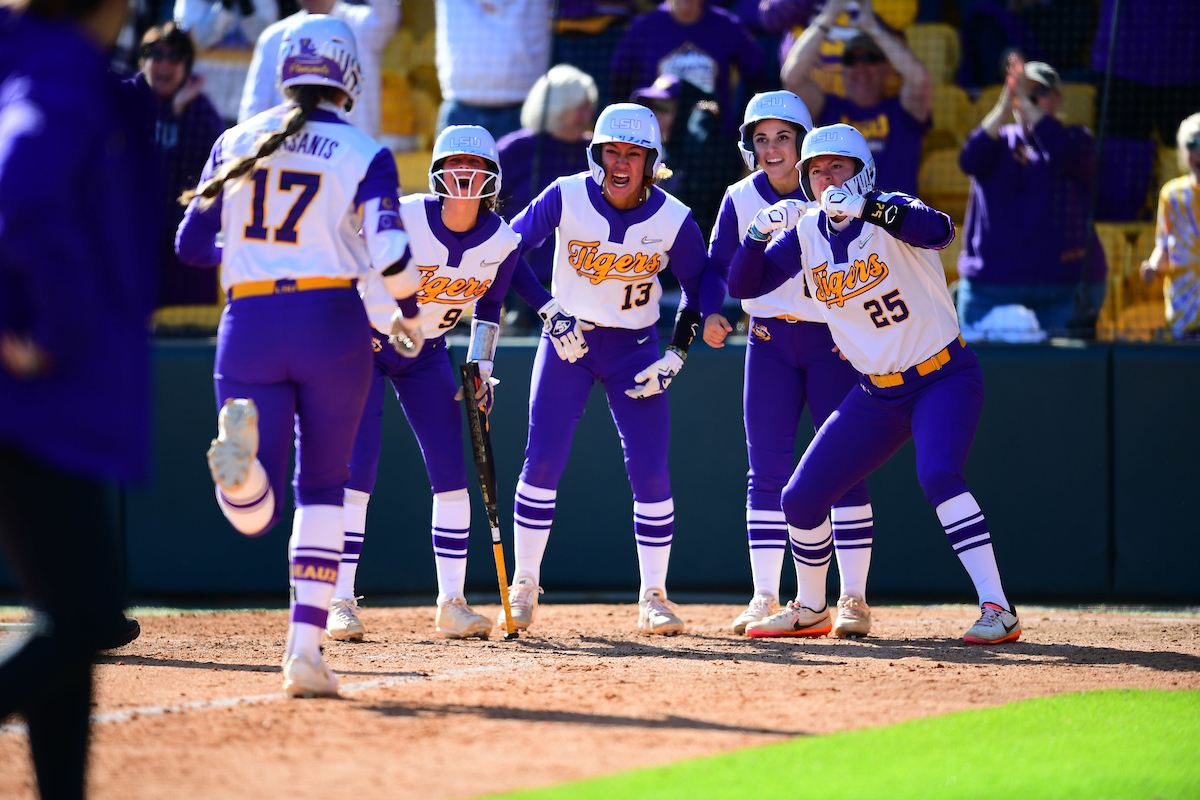 Clark led the Tigers with a .667 batting average with four hits, including three home runs. She also drove in eight RBIs to boost her total to 34 ribbies on the year. Chaffin (3-0) tossed her second complete game of the season and was one batter shy of recording a perfect game.

In addition to snapping a six-game losing streak in head-to-head meetings versus the Crimson Tide, the Tigers knocked off the No. 2 team in the country for the first time since defeating Auburn 8-0 in six innings six years to the day (March 12, 2017) and won their first three-game series against Alabama since the 2015 season.

The Tigers hit .340 on the day while holding UA to a .163 average. LSU outhit Alabama 18-8, including a season-high 15 hits in game one, and held their opponent to seven runs in 14.0 innings who entered the weekend averaging 6.55 runs per game.

Sophomore Danieca Coffey went 3-for-5 at the plate and had two RBIs and two runs as she extended her hitting streak to seven games and her reached base streak to 23. Junior Raeleen Gutierrez also had three hits, while Taylor Pleasants, Ali Newland, and Ciara Briggs each had two hits on the day. Pleasants also had a home run and had three RBIs in the doubleheader.

The Crimson Tide got on the board first with a solo shot to centerfield in the top of the second inning. The Tigers responded with a pair of singles from Newland and Gutierrez, and Freshman McKenzie Redoutey drew a walk to load the bases with one out. Coffey earned an RBI by taking a base on balls to score Newland, and LSU gained the lead when Gutierrez scored on a wild pitch. The Tigers walked in another run to cap a three-run inning.

Alabama led off the third stanza with another home run and a sacrifice fly tied the game, 3-3. LSU kept the advantage however with another leadoff single from Newland and a double from Gutierrez to put both runners in scoring position. Junior Morgan Cummins grounded out but scored Newland to regain the lead, and Gutierrez capitalized on a passed ball to make the score 5-3 through three innings.

In the top of the fifth, Bama took a 6-5 lead with three runs on three hits. However, The Fighting Tigers erupted for six runs in the bottom half inning, highlighted by a three-RBI home run from Pleasants. Redoutey tied the game with an RBI double and Coffey’s RBI single gave LSU a 7-6 lead before Pleasant’s homer. Freshman Presleigh Pilon added another run with an RBI triple to make the score 11-6 after five frames.

The Tigers padded their lead after Clark went yard in the sixth inning, driving in two more runs to increase their margin, 13-6. Junior Ali Kilponen earned the win after throwing four innings of relief with a pair of strikeouts. Senior Shelbi Sunseri got the start, and junior Shelby Wickersham made an appearance for 2.0 innings.

Chaffin retired 21 of the 22 batters she faced, recording five strikeouts and no walks as she improved to 3-0.

Like game, one, Alabama hit a home run in the second inning to strike first. In the bottom of the third, freshman Sydney Peterson was hit by a pitch and Coffey singled to center field. With two outs, Pleasants was intentionally walked to load the bases and cleanup hitter Clark did her job with a home run to left field, giving the Tigers a 4-1 lead.

Clark struck again for her third dinger of the day in the sixth inning to increase LSU’s margin 5-1. In the top of the seventh, Chaffin continued to deal as she retired the first three batters, including a strike out to seal the game.

On Raelin Chaffin’s game on the mound…

“You never know what is going to happen when you go into a series, that is why you have everyone ready. We had all hands-on-deck, and that is the point of having a deep pitching staff. You never know when your number was going to be called, and she was ready when her number was called today.”

“She was incredible. Shelbi Sunseri is a big leader for us, so I did not want us to take a dip when she left. I wanted us to continue playing and play for her if we had to. Georgia is an incredible talent. She and Shelbi are our leaders.”

“I think we prepared so well. All our coaches this whole week were like ‘it is going a be challenging practice.’ It is the number two team in the country, so we were focused on who our opponent was and basically what our plans were the whole week. Practice was hard. There were a lot of days where we were frustrated, and it was not fun. Then we get out here for games like this and it makes it all worth it. We put on a great show in front of our fans. It was just a great day for us.”

On her grand slam…

“I was just looking for a pitch to drive. They had just walked Taylor [Pleasants] in front of me. I felt that a little bit in my heart. I am not going to lie to you guys. It felt good getting that one out of the way. I was like ‘hey, this one felt good.’ I saw a pitch I could drive and just basically smoked it. I told myself ‘Don’t be late, get on time.”

On her one hit performance…

“I guess I do not pay attention that much, but I did not even know it was a one hitter. It was the last inning and I looked up and saw a one on the board. I did not even know I was going to start, I thought they were going back to Ali [Kilponen]. Once I knew I got the start I knew it was time to get to work.”

On her initial reaction to starting…

“I was freaking out a little bit, but I was talking to Ali Kilponen and the last couple games I pitched I did not get the result I wanted. I know I can be so much better than what I have been doing, so when coach told me I was starting, I went in with the mindset, why not me? Why not LSU? Why not us?

LSU will end the series with Alabama Sunday with a 2 p.m. game on SECN+.