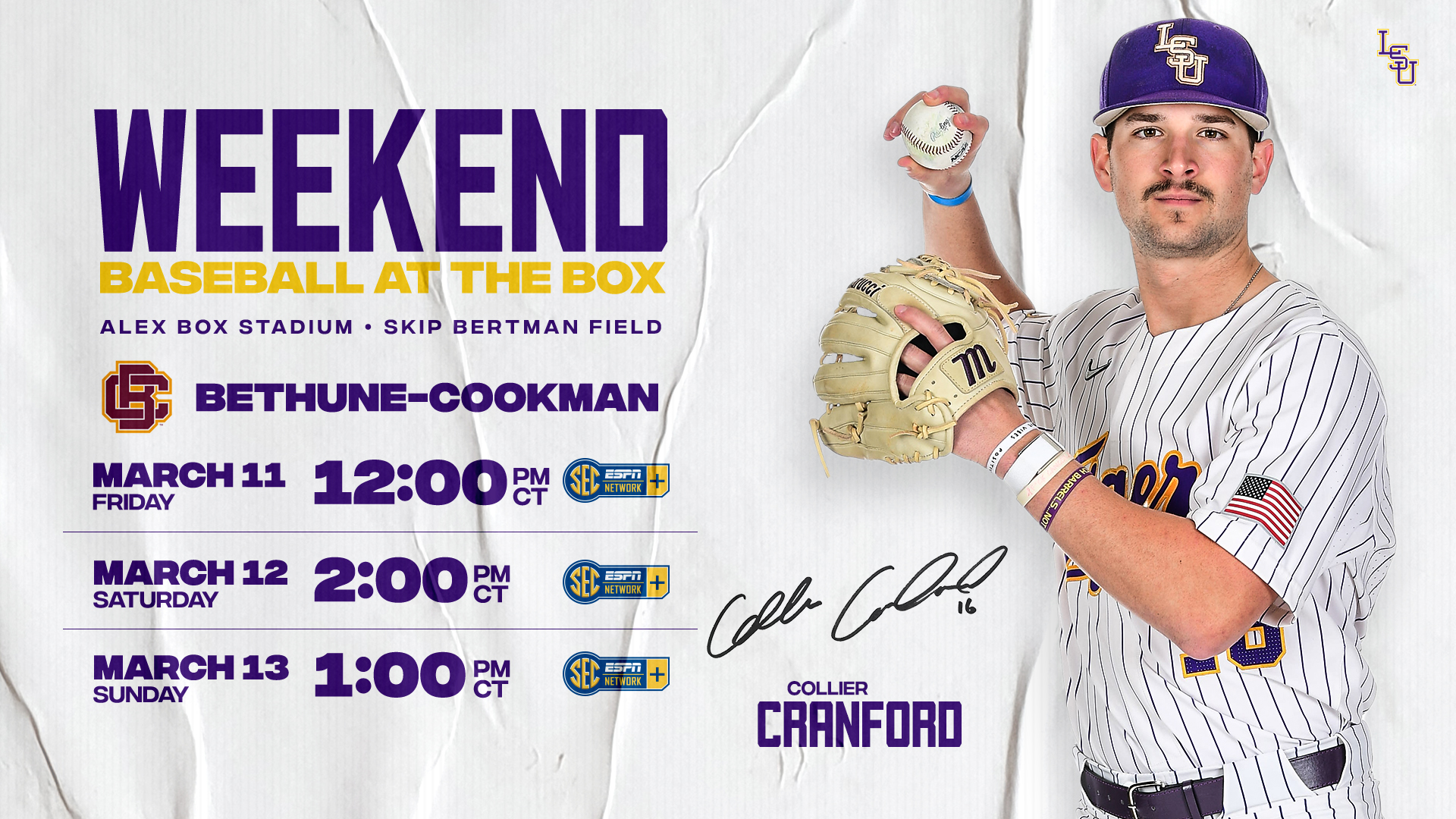 TV/ONLINE
• The games may be viewed live on SEC Network +

QUOTING COACH JAY JOHNSON
“I really like our team, it’s a good group of guys to be around every day. They’re not perfect, but that’s why they’re here playing college baseball. This is a great group of guys to start building our foundation with. Offensively, we have a lot of strong pieces and high expectations because of the talent on our team, but we’re meeting those expectations. Defensively, we are clear on the objectives on which we need to improve, and the story of the early part of the season for me has been the number of guys making a positive contribution on the pitching staff.”

ABOUT THE TIGERS
• Leftfielder Gavin Dugas and rightfielder Jacob Berry combined for two homers and five RBI Wednesday night to lead sixth-ranked LSU to a 6-3 win over McNeese in Alex Box Stadium, Skip Bertman Field … right-hander Will Hellmers (2-0), the first of five LSU pitchers, was credited with the win as he fired three shutout innings and limited the Cowboys to one hit with two walks and three strikeouts … relievers Grant Taylor, Samuel Dutton, Paul Gervase and Trent Vietmeier followed Hellmers and combined to limit McNeese to two earned runs on four hits in six innings with two walks and eight strikeouts … eight of the nine players in LSU’s starting lineup collected at least one hit in the contest.
• LSU is No. 3 in the SEC in team batting average with a .321 mark, and LSU is No. 2 in the league in on-base percentage (.453) … first baseman Tre’ Morgan is No. 2 in the league in runs scored with 19; second baseman Cade Doughty is No. 1 in the conference in doubles (8) and No. 2 in RBI (20); outfielder Dylan Crews is first in the SEC in triples (3), and utility player Jacob Berry is in a first-place tie in the SEC homers race with six dingers … right-hander Blake Money ranks No. 1 in the SEC in innings pitched with 20.2, and he is No. 3 in ERA (0.44).
• LSU dropped two of three games last weekend in the Shriners Classic in Minute Maid Park in Houston … the Tigers defeated Oklahoma, 5-4 (11 innings), on Friday before suffering losses to Texas (1-6) on Saturday and to Baylor (6-9) on Sunday … LSU is now 6-6 all-time in the Shriners Classic with appearances in 2015, 2017, 2020 and 2022.
• LSU’s game versus Texas on Saturday drew a crowd of 24,787, which ranks as the seventh-largest attendance figure for a single-day regular-season game in NCAA baseball history … LSU also played in the game which ranks No. 4 in NCAA baseball attendance history, as 27,673 fans witnessed LSU face Tulane in the Louisiana Superdome in New Orleans on April 10, 2002.
• The Tigers were led at the plate in last weekend’s Shriners Classic by second baseman Cade Doughty, who hit .385 (5-for-13) in three games with three doubles, one homer and four RBI … rightfielder/third baseman Jacob Berry batted .333 (4-for-12) over the weekend one double, one homer and two RBI, and first baseman Tre’ Morgan hit .308 (4-for-13) with three doubles, three runs and one RBI.
• Sophomore right-hander Blake Money delivered his third straight quality start last Friday versus Oklahoma, working 6.2 innings and allowing just one earned run on eight hits with one walk and seven strikeouts.

ABOUT THE WILDCATS
• Bethune-Cookman is 5-7 this season; the Wildcats dropped a 6-2 decision at Central Florida on Tuesday prior to traveling to Baton Rouge to face LSU … B-CU returned to the diamond for the 2022 season after the Wildcats had their entire 2021 season canceled due to the COVID-19 pandemic … B-CU played 18 games in 2020 before all NCAA programs canceled their seasons due to the pandemic.
• B-CU hitting .227 as a team with 13 doubles, three triples, three homers and 30 steals in 37 attempts … infielder Matthew Garcia is batting a team-high .360 with four doubles, three triples and nine RBI … outfielder Malik Stephens is hitting .354 with five doubles, eight RBI and 10 stolen bases … catcher Boris Pena has hit two of the Wildcats’ three homers this season.
• The Wildcats’ pitching staff has a 5.70 ERA with 109 strikeouts in 109 innings and a .274 opponent batting average … B-CU right-hander Nolan Santos was named SWAC Pitcher of the Week after defeating Stetson last weekend … Santos worked eight innings and allowed no runs, on two hits with no walks and 11 strikeouts.