LSU Defeats Mizzou in Second Round of SEC Tournament, 76-68 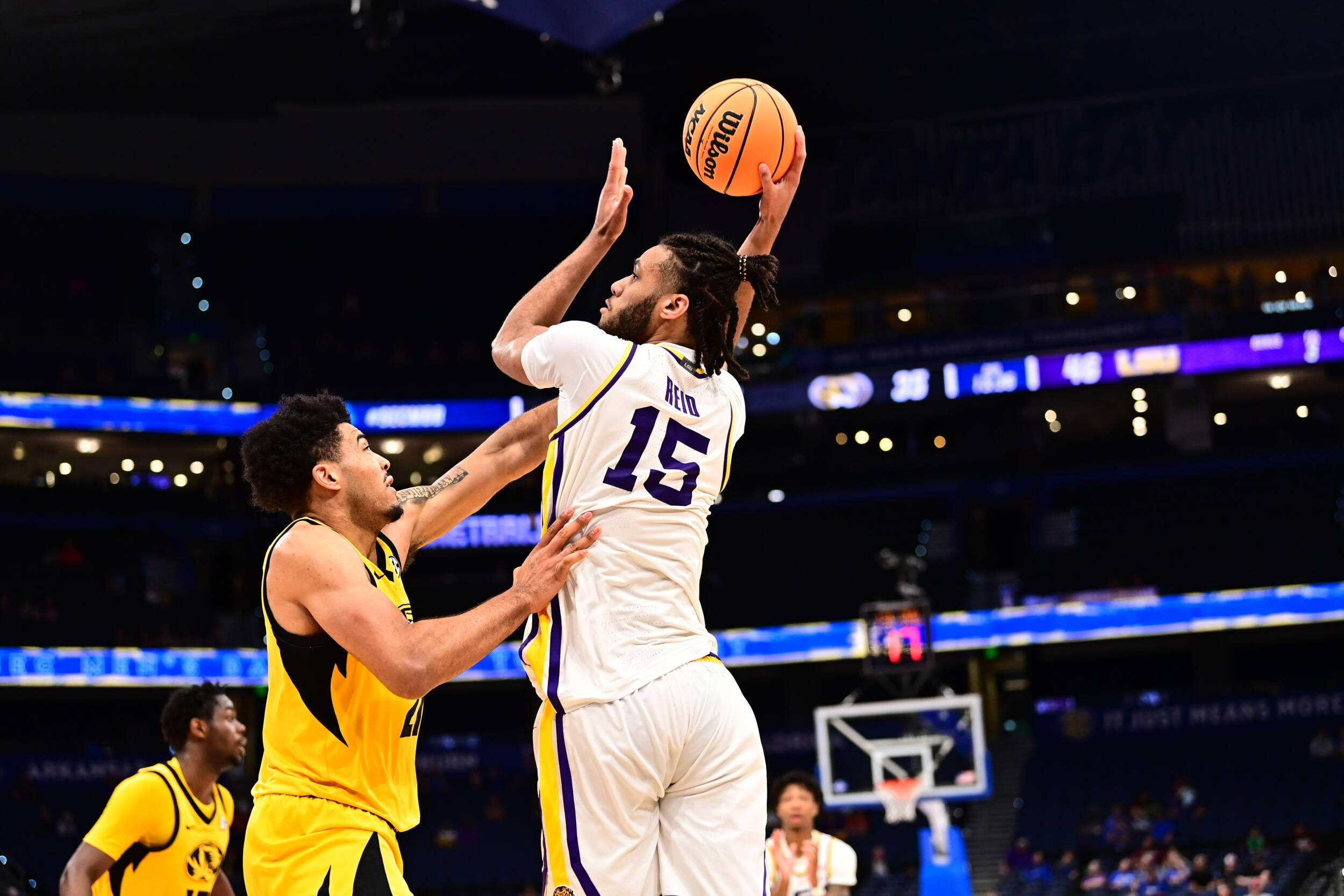 TAMPA, Florida – A quick start by the LSU Tigers allowed the team to get past the second round to the quarterfinals here Thursday at Amalie Arena in a 76-68 decision over the Missouri Tigers.

The fifth-seed Tigers will now face Arkansas Friday 25 minutes after the 11 a.m. CT opening game of the afternoon session between Auburn and Texas A&M. The game will be broadcast on the affiliates of the LSU Sports Radio Network (Guaranty Media flagship Eagle 98.1 in Baton Rouge) and televised on ESPN with Karl Ravech, Jimmy Dykes and Marty Smith on the call.

LSU is now 22-10 and has won six-of-its-last-nine games. LSU had five players in double figures with SEC Sixth Man of the Year Tari Eason scoring 19 points on 7-of-11 shooting from the field. Darius Days hit 6-of-11 field goals with three steals to record 16 points. Efton Reid made all six field goal attempts in scoring 12 points while Xavier Pinson had 11 points (5 assists, 3 steals) as did Eric Gaines.

DaJuan Gordon had 19 points with four treys to lead Missouri (12-21) while Trevon Brazile had 15 points and Javon Pickett 14.

The start was what got LSU the win as Pinson and Days scored LSU’s first four points. After a Missouri bucket, Pinson had two free throws and a three-pointer that made it 9-2, forcing a Mizzou timeout. Days then hit a trey to push it to 12-2.

The Tigers did not finish very crisply as Missouri forced several turnovers late that resulted in points, cutting it to the final margin.

LSU and Arkansas met twice earlier in the season with the Razorbacks rallying from eight down to defeat LSU, 70-67, back on Jan. 15, in Baton Rouge. Arkansas was able to also get a 77-76 win at Bud Walton Arena in Fayetteville on March 2.

WILL WADE: We got off to a good start. It’s a good win. Any time you can win in the tournament is a positive. Obviously, we had some major lapses in the second half, but I thought Missouri played extremely, extremely well. Caused 24 turnovers, which was good. We still turned the ball over way too much, but we got to get that corrected. We’ve got to — we have a really good Arkansas team that’s had our number this year coming up, and so we have to get it corrected. But I thought Murray played great with nine assists. I thought we had five guys in double figures, which was really good as well. So we’ve got to play better tomorrow, but we’re happy to get the win.

Q. Really for any three of you guys, obviously, Xavier Pinson came into this game playing against his former team. Was there any extra motivation for him, or how do you guys kind of see him go throughout the game?

THE MODERATOR: Start with Tari maybe.

TARI EASON: I don’t think there was extra motivation. I think we just wanted to win. We wanted to get a win, and, obviously we wanted another crack at Arkansas. So I think that was motivation in and of itself, obviously. Maybe X had a little more intrinsic motivation because it was his old school, but it was motivation nonetheless like any other game.

Q. Darius, coach always talks about y’all played well with distractions and stuff like that. Did the first half today kind of play into that a little bit?

DARIUS DAYS: I just feel like we just executed everything — mostly everything Coach said, but we just got to be better. And distractions really doesn’t bother us too much at times, so we just got to lock in and get ready for Arkansas.

Q. Hey, guys, what do you remember about those first two Arkansas games? What stands out to you, and what are your expectations for tomorrow, getting a third shot at them? I would like all of them to take it, if that’s okay.

EFTON REID: Yeah, those are both games that we played. They were close games. They were really good games, and we look forward to playing them again and executing our stuff against them basically, yeah.

Q. Tari?
TARI EASON: Yeah, the things that stand out to me really is just that we lost, and what I’m hoping to look for tomorrow is a win. So that’s what we’re geared up for and that’s what we’re going to hopefully gear up to do.

EFTON REID: Yeah, that’s what my mom says. My mom says change is always good. Yeah, my mom thinks it’s my hair. No, it’s March, so, I mean, I really just sat and talked to my mom and my brother, and they told me basically what I had to do and just focus on, and I really focused on those things that I needed to do in this game and just trying to not foul early on and just focusing, not worrying about my points, rebounds, or just blocks, but worrying about just every possession.

Q. Darius, you referenced Jalen Williams and another guy on the team that’s had a really successful season for the Razorbacks, J.D. Notae, and you guys pretty much contained him. He was 4 for 12 for only 12 points. What’s going to be the key to stopping one of the best offensive players in this conference?

WILL WADE: Pray.
DARIUS DAYS: Coach about said it right.
WILL WADE: We got lucky. He missed some shots now at Arkansas. I mean, he missed some open shots. We were fortunate. He makes those nine out of every ten games.

Q. This is maybe for Darius and Tari. You guys are going to be playing your second game in two days tomorrow, but you had a good win today, and you already kind of got hot for the tournament. Arkansas, it’s going to be their first game in several days. Which scenario do you think is better? Playing and winning or having a little extra rest like Arkansas has had?

DARIUS DAYS: Coach always says the first game is the hardest game, so coming off this win is really going to help us tomorrow, I feel like.

TARI EASON: I feel the same way. Basically the first game, like he said, is the hardest game. But the first game is always good at the same time because it helps you build momentum, and that’s something that we definitely need Gearing up going into the rest of this tournament.

Q. Basically the same question I asked previously to them. Just kind of talk a bit about Xavier Pinson’s performance today and just kind of what he brought.

Q. Will, what stands out to you about those first two Arkansas games? They could have gone either way. And getting a shot at a third time, how motivated do you think you guys are and what are your expectations for tomorrow?

WILL WADE: The first thing that stands out is how hard Arkansas plays. I think they’re one of the hardest-playing teams in our league. You know, it’s what makes this league so tough, how good everybody is. But there’s not like — not like a team that sits back in a two-three zone, you know I’m saying? Like every team, but I say this as a compliment to Arkansas — Missouri plays extremely hard as well — I think Arkansas is towards the top end of the hardest-playing teams in our league, if not the hardest playing team. Obviously, Notae made huge plays and Williams have made huge plays in both games. Toney killed us at Arkansas. I think he had 18 points and scored everything around the rim. Umude hit some big threes. I think he is shooting over 40% from three-point line in SEC play.

They have a very balanced roster. They’ve got a very, very — very, very good team. I know they’ll be extremely well-prepared. I think Muss does a phenomenal job of preparing his team and taking away your strengths. So they’ll be well-prepared. It will be — we’re going to have to play extremely well. I do think having to play today is to Arkansas’s advantage because you have to play so hard to beat them, and we had to play seven, eight guys today some major minutes. Seven guys, some major minutes. But we’ll go back and we’ll prepare, and they’re a great, great team.