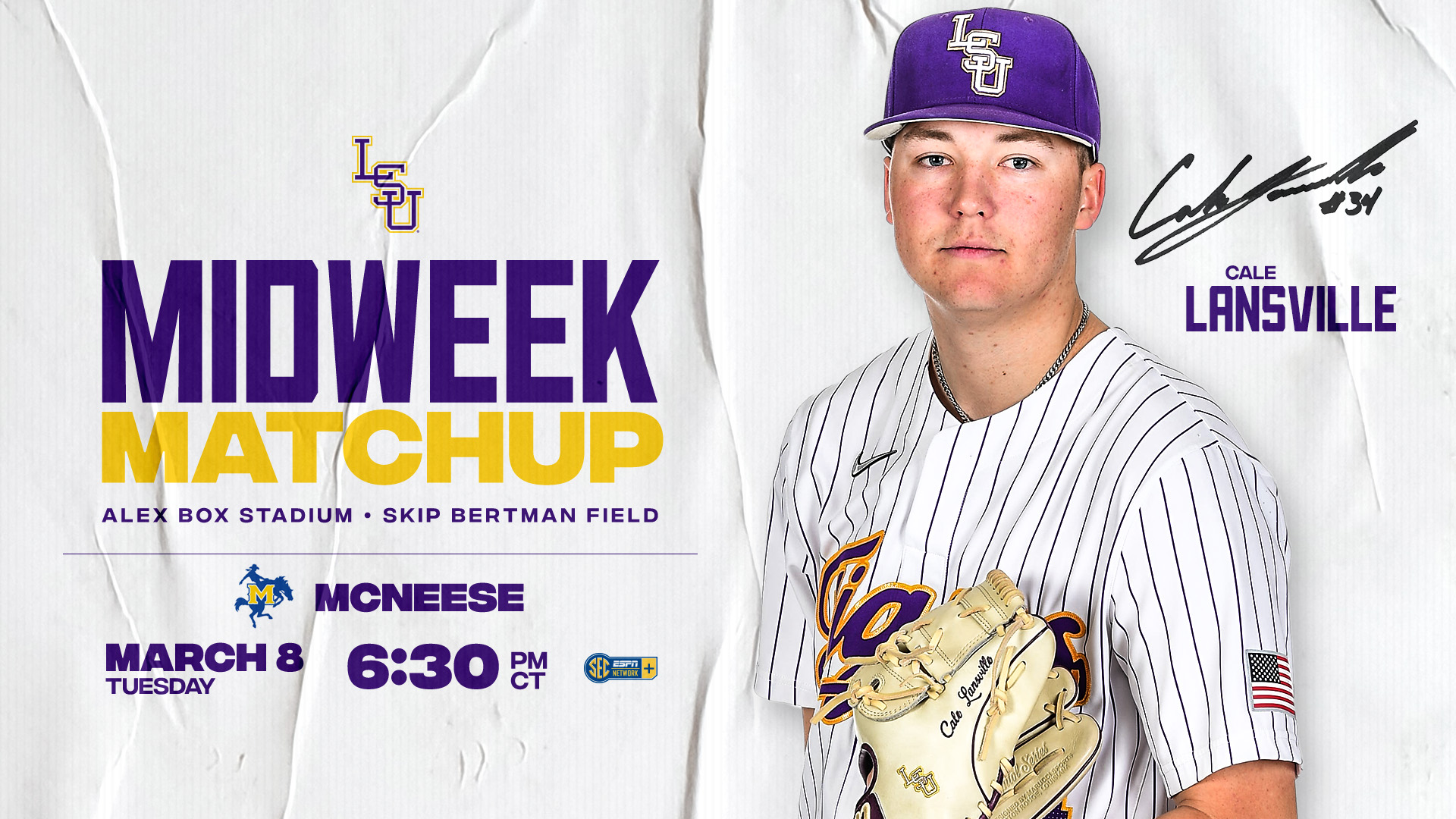 Game moved to Wednesday, March 9, due to the weather forecast.

TV/ONLINE
• The game may be viewed live on SEC Network +

QUOTING COACH JAY JOHNSON
“I’m glad we’re home for the next couple of weeks, mostly for the ability to practice and train, maximize that time and be the type of team that we want to be. I think this past weekend will help us going forward and help us prepare to do what we need to be successful. I expect to win every game, and we didn’t do that, but I like the fight our team showed all weekend. We had some very good performances on the mound, which we’re going to need. Because of the way we’re set up right now, we’re going to have to use a lot of guys. We do have to play better defense, I don’t know any other way to say it, and we’ll continue to work on that.”

ABOUT THE TIGERS
• LSU dropped two of three games last weekend in the Shriners Classic in Minute Maid Park in Houston … the Tigers defeated Oklahoma, 5-4 (11 innings), on Friday before suffering losses to Texas (1-6) on Saturday and to Baylor (6-9) on Sunday … LSU is now 6-6 all-time in the Shriners Classic with appearances in 2015, 2017, 2020 and 2022.
• LSU’s game versus Texas on Saturday drew a crowd of 24,787, which ranks as the seventh-largest attendance figure for a single-day regular-season game in NCAA baseball history … LSU also played in the game which ranks No. 4 in NCAA baseball attendance history, as 27,673 fans witnessed LSU face Tulane in the Louisiana Superdome in New Orleans on April 10, 2002.
• The Tigers were led at the plate in last weekend’s Shriners Classic by second baseman Cade Doughty, who hit .385 (5-for-13) in three games with three doubles, one homer and four RBI … rightfielder/third baseman Jacob Berry batted .333 (4-for-12) over the weekend one double, one homer and two RBI, and first baseman Tre’ Morgan hit .308 (4-for-13) with three doubles, three runs and one RBI.
• Sophomore right-hander Blake Money delivered his third straight quality start on Friday versus Oklahoma, working 6.2 innings and allowing just one earned run on eight hits with one walk and seven strikeouts.
• Redshirt sophomore reliever Eric Reyzelman made two appearances in the Shriners Classic and recorded 2.2 scoreless and hitless innings with one walk and three strikeouts … freshman right-hander Samuel Dutton worked 2.2 relief innings against top-ranked Texas on Saturday and allowed just one unearned run on one hit with one walk and two strikeouts … graduate reliever Trent Vietmeier made two appearances over the weekend, and he fired five strikeouts in 2.1 innings.
• LSU is No. 3 in the SEC in team batting average with a .319 mark … first baseman Tre’ Morgan leads the league in runs scored with 19, second baseman Cade Doughty is No. 1 in the conference in doubles (8), outfielder Dylan Crews is first in the SEC in triples (3), and utility player Jacob Berry is in a first-place tie in the SEC homers race with 5 … right-hander Blake Money ranks No. 1 in the SEC in innings pitched with 20.2

ABOUT THE COWBOYS
• McNeese is 8-4 this season, and the Cowboys are hitting .273 as a team with 17 doubles, eight triples, nine homers and 27 steals in 28 attempts.
• First baseman Tre’ Obregon is batting .395 on the year with two doubles, one triple, two homers and 11 RBI … infielder Brad Burckel is hitting .341 with three doubles, one triple, one homer and 10 RBI, and outfielder Payton Harden is batting .333 with three doubles, 10 RBI and 11 runs scored.
• The McNeese pitching staff has a 4.14 cumulative ERA with 130 strikeouts in 100 innings, and opponents are hitting just .217 against the Cowboys.
• McNeese head coach Justin Hill was a pitcher at LSU in 2001 and 2002 … he is in his ninth season (2014-22) at the helm of the Cowboys program.