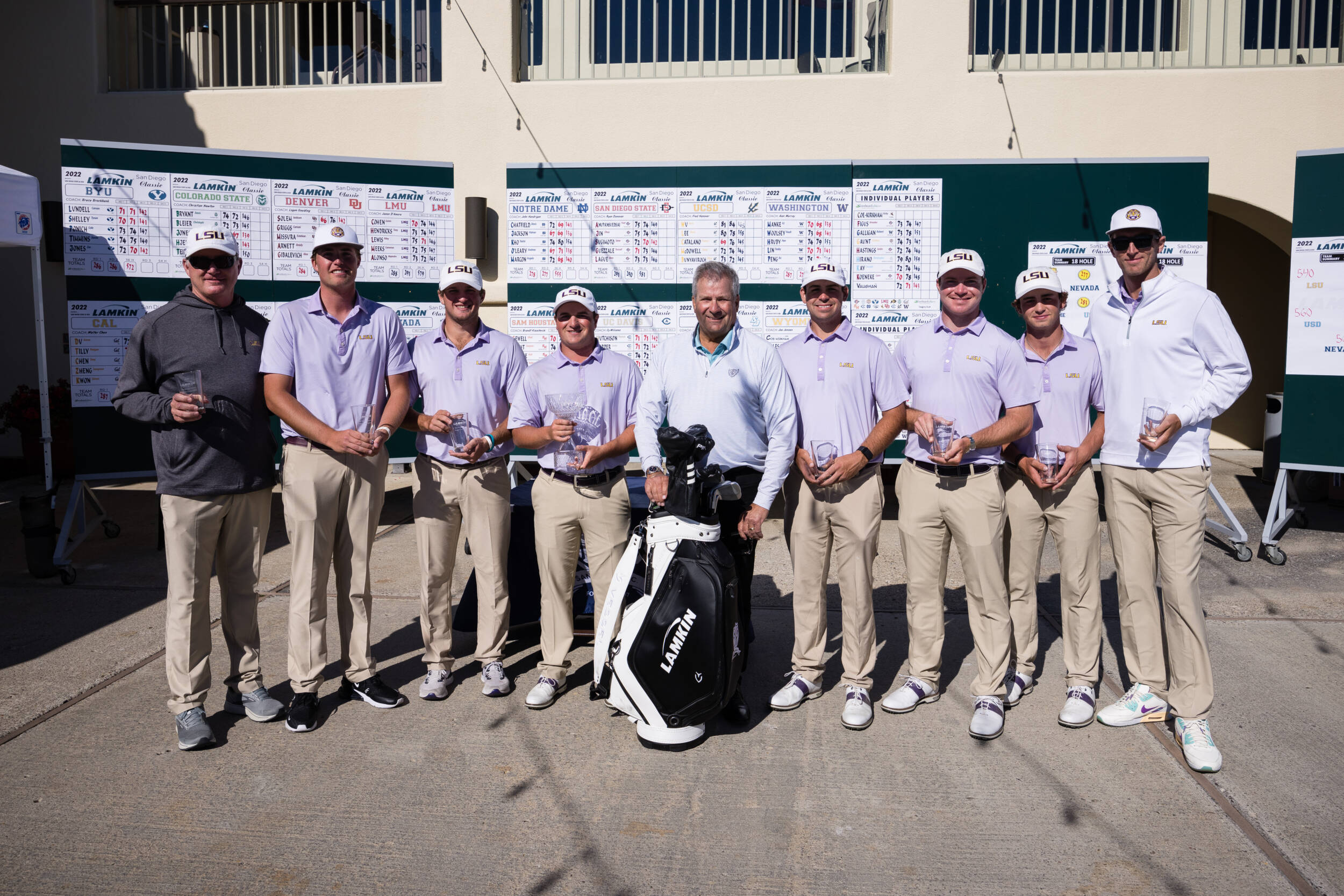 Chula Vista, Calif. – The LSU men’s golf team claimed its second team title of the season as they concluded the Lamkin Grips San Diego Classic with a 37-under 827 total score on Tuesday afternoon at the San Diego Country Club. Individually, Nicholas Arcement claimed the first individual title of his career as he finished the tournament at 13-under 203.

The Tigers were victorious by eight strokes over second place No. 8 Washington and were dominant in a wire-to-wire performance in a field that included No. 15 Notre Dame and No. 45 Nevada. The team’s pull away win was powered by the Tigers leading the field in par 3 (3.00) and par 4 (3.90) scoring averages. For head coach Chuck Winstead, it’s the 39th title win in his 17th year at LSU. The 37-under 827 total was the third lowest team tournament score in relation to par in program history.

“Proud of our team,” head coach Chuck Winstead said. “We have had some bright spots in our first two events but we hadn’t put together three solid rounds. We played extremely well yesterday and backed it up with solid, steady golf today. It’s great to be in the hunt and get a win, but it’s even better that everyone played well and contributed. We’re excited for Nicholas to get his first college win, he played some outstanding golf.”

Round Three
Arcement capped off a dominant wire-to-wire tournament by shooting a 2-under 70 in the final round to finish at a career-low (in relation to par) 13-under 203, two strokes ahead of second place. Arcement played a steady tournament and led the field with a (-5) score on Par 3s and a (-6) score on par 4s. The title is the first of his collegiate career and came against six golfers ranked in the top 100, including the No. 1, No. 3, and No. 14 ranked players in the NCAA. In relation to par, Arcement’s 13-under 203 finishes as the 5th lowest individual tournament score in program history.

“All week long my putter was rolling really well and made lots of putts,” Arcement said. “I simply put myself in good spots on and around the greens, which was what I needed to do, and the putts fell in. It’s a great feeling, I can’t wait to celebrate and get ready for the next event.”

Garrett Barber shot an even par 72 to finish the Classic at 8-under 208 and secured a 5th place finish, his team-leading third top 5 finish of the season and sixth of his career. Michael Sanders finished only one stroke behind Barber and tied for 6th with a 7-under 209 after finishing the third round at 1-over 73. The top 10 finish is his fourth of the year, tying him with Barber for a team-high.

Cohen Trolio shot a 1-over 73 final round that took his final score to 6-under 210, which placed him tied for 9th place in the final standings, the best finish of his collegiate career. Trey Winstead rounded out the Tigers in the starting lineup as he finished tied for 13th place with a 5-under 211 score after shooting even par 72 in the final round. Winstead’s tie for 13th place matches his season best and placed him above four players ranked in the top 100.

Competing as an individual, Connor Gaunt shot a 6-over 78 final round to complete The Classic at 9-over 225 and tied for 78th.

Up Next
LSU returns to action at the first round of the Louisiana Classics, hosted by UL-Lafayette, at 8 a.m. CT on Monday, March 14th.