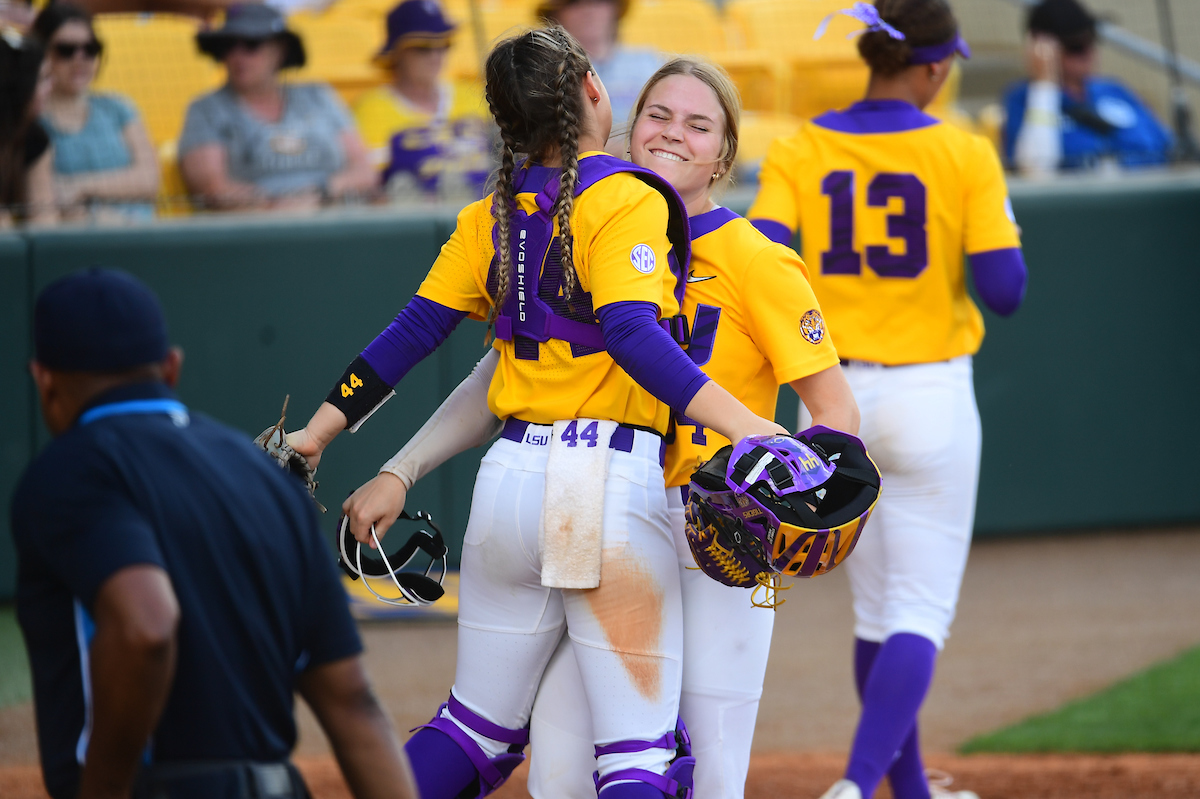 The Tigers have won 12 of their last 13 games overall, with five of the last eight resulting in shutouts. LSU collected 21 hits to its opponents six and had three home runs on the day from Baylea Brandon, Morgan Cummins, and Ali Newland.

In the circle, freshman Raelin Chaffin and junior Shelby Wickersham each tossed complete game shutouts and combined for 18 strikeouts and gave up just six hits in 13.0 innings pitched. The duo held the opposing batters to a .140 average.

For the second consecutive game, LSU scored in the first inning. Briggs singled to left field, and Pleasants brought her home with a single to right. Senior Shelbi Sunseri got in on the action with a two-out RBI single to score Pleasants, capping the inning with the Tigers leading LA Tech, 2-0.

Cummins led off the second inning with a double and crossed home plate courtesy of a fielding error by the right fielder after freshman Sydney Peterson’s hit. Junior Georgia Clark added an RBI single that scored Peterson, doubling the Tigers’ lead, 4-0 through two innings.

Cummins led off again in the fourth inning, but this time went yard for her first home run of the season and 10th in her career. Peterson was hit by a pitch, Coffey singled, and Briggs drew a walk to load the bases with no outs. Pleasants flied out to centerfield but earned the sacrifice fly as Peterson scored for the second time, making the score 6-0.

The Tigers wrapped up the run-rule game with two more runs in the sixth inning. After Coffey and Briggs hit their second singles of the game, Pleasants came to the plate and roped one to right center to score Coffey, and Clark’s fielder’s choice, SAC bunt scored Briggs to end the game.

Wickersham struck out six batters and gave up three hits and seven walks in the complete game shutout. It was Wickersham’s 14th career complete game and her eighth career solo shutout.

Offensively, every spot in the lineup had a hit in the game against Central Connecticut State, but it was Chaffin who stole the show. Chaffin had an impressive performance in the circle as she registered her first complete game shutout, striking out a season-high 12 batters and giving up just three hits and two walks. Chaffin’s 12 strikeout is a season-best among all pitchers on the staff this season.

Freshman Baylea Brandon hit an opposite field home run for two RBI to start the scoring in the second inning and Coffey’s RBI single made the score 3-0 heading into the third stanza. In the next inning, Pleasants singled, stole second base, and advanced to third on a long flyout from Brandon before crossing home plate on a wild pitch to make the score 4-0 after three innings. Newland hit the second home run of the game for the Tigers with a solo shot to right field to add an insurance in the fifth.

Chaffin closed the door by allowing only one base runner in the final two innings.

On the team’s recent performances…

“We did not play well the first weekend, and the second weekend, we played a ‘who’s who’ list of opponents. We are building and getting better every weekend and I am happy with the spot we are in right now.”

“I thought Raelin did a great job. She did everything we needed her to do. She obviously had her best start of the year, and one of the best starts we have had from a pitcher all year, honestly.”

On the second half of the lineup…

“When it comes to the lineup, a lot of it is due to matchups and due to what our hitters hit well. We have a deep team, and we can match some things up. I think you are seeing some people in and out because, maybe a certain hitter is better against left-handers or right-handers.”

On her 12-strikeout performance…

“I could always be better, but today I had a great defense behind me who made amazing plays and a great coach calling pitches.”

On difference between her first start and today’s start…

“The first start I pitched, I ended up getting pulled and we lost, whereas this time I finished the entire game and had 12 strikeouts, so I would say this was an improvement. It could only go up from here.”

On her home run this game…

“I think that I just had to stay in it. My first few at-bats were not what I wanted, but my teammates kept encouraging me the whole time. I got up there and told myself to be on time, and I just kind of went with it from there.”

“That was so cool. I think watching my teammates get so hype for me is the best part of this whole thing. That is the coolest part of the whole experience. When I popped up and threw to second, I told Taylor Pleasants that it was all on her. As soon as I popped up, she was screaming, ‘2, 2, 2!’ It is great to know she has my back.”

Next weekend is opening week for the SEC and the LSU Tigers will open the schedule hosting No. 2 Alabama March 11-13.