Shortstop Jordan Thompson launched a home run to lead off the bottom of the 11th inning Friday, lifting third-ranked LSU to a 5-4 win over Oklahoma in the Shriners College Classic at Minute Maid Park. 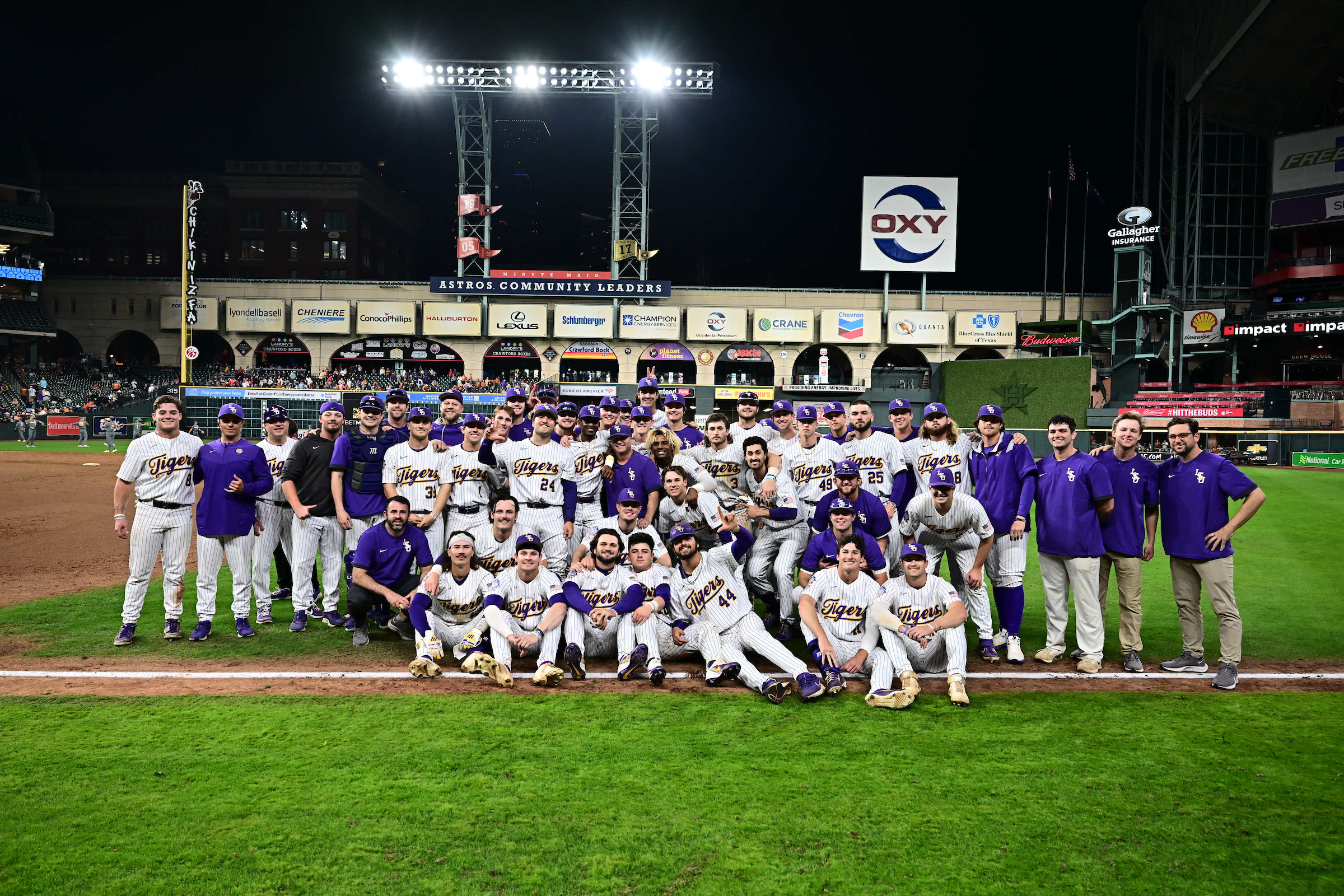 HOUSTON – Shortstop Jordan Thompson launched a home run to lead off the bottom of the 11th inning Friday, lifting third-ranked LSU to a 5-4 win over Oklahoma in the Shriners College Classic at Minute Maid Park.

LSU improved to 9-1 with its sixth straight win, while Oklahoma dropped to 5-3.

LSU will face top-ranked Texas at 7 p.m. CT Saturday in Minute Maid Park. The game will be broadcast on affiliates of the LSU Sports Radio Network.

Fans in Louisiana can see the game on TV on AT&T SportsNet Southwest, or they can stream it on Astros.com, the Astros Twitter, Facebook and YouTube accounts, and the MLB app. Additionally, subscribers to AT&T SportsNet SW can also stream the games live on the AT&T SportsNet app.

Outside of Louisiana and the Astros’ five-state viewing area, the game will also be televised on the MLB Network.

Leading off the bottom of the 11th against Oklahoma reliever Griffin Miller (0-1), Thompson blasted the fourth pitch of the inning into the left-field box seats to give the Tigers the victory. The dinger was Thompson’s first of the season and the second walk-off homer of his career. He also hit a 13th inning walk-off homer last season to defeat UT San Antonio, 10-9.

Bryce Collins (1-0), the seventh LSU pitcher of the game, was credited with the win Friday after he retired the final OU hitter in the top of the 11th with the go-ahead run on second base.

“I can’t say enough about the toughness of our at-bats and the way our players competed,” said LSU coach Jay Johnson. “There is plenty of talent in our lineup, but tonight I think it was our character makeup and competitive at-bats that did it for us.

“We have good players, but they’re tough too. You can’t win games like that unless you have a competitive character and makeup. These types of wins are really valuable because they demonstrate who our players really are as people as much as it does their baseball talent.”

Oklahoma led 3-0 heading into the bottom of the seventh inning, when LSU leftfielder Gavin Dugas delivered an RBI single against reliever Devin Michael for the Tigers’ first run of the game.

The Sooners, however, reclaimed the lead in the top of the 10th when centerfielder Tanner Tredaway singled and scored on catcher Jimmy Crooks’ double.

Morgan and Doughty combined again to tie the contest in the bottom of the 10th against reliever Jaret Godman. Morgan lifted a one-out double to left field, and after centerfielder Dylan Crews fouled out, Doughty smacked a double down the left-field line to drive in the tying run.

Trent Vietmeier and Collins combined to pitch a scoreless 11th, setting the stage for Thompson heroics.

“Blake was outstanding, he gave us a great performance,” Johnson said. “His conditioning was great, his stuff was great; that’s a good Oklahoma lineup he got through, and we can’t win this game in extra innings if he doesn’t pitch as long as he did.”