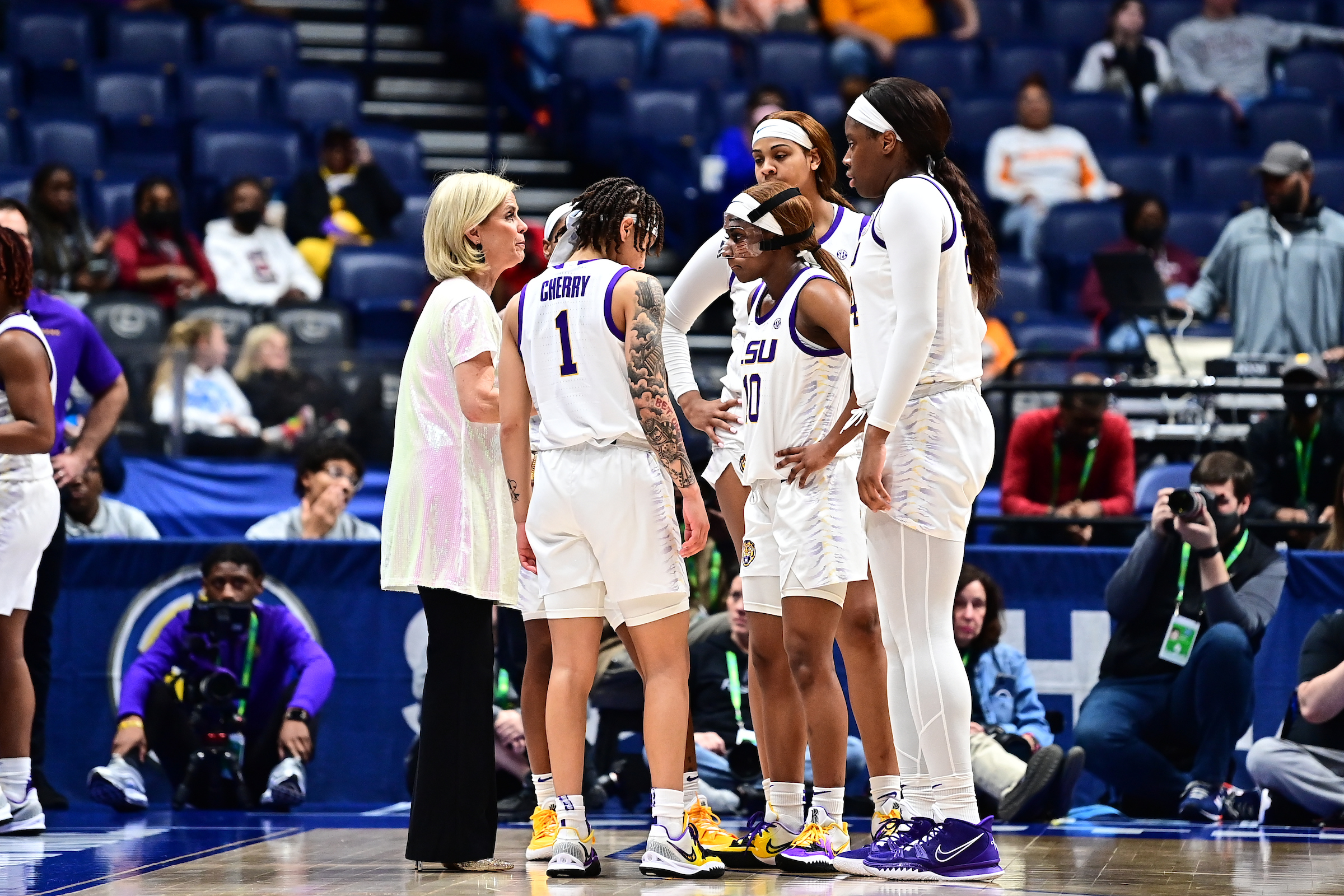 NASHVILLE – LSU fell in the quarterfinals of the SEC Tournament Friday night to Kentucky, 78-63.

“They (Kentucky) just came out on fire,” LSU Coach Kim Mulkey said. “I watched them play the previous games and they have all their parts back. They have everybody healthy, you know, and they’ve been on a run. They’ve won seven or eight in a row. And they can score the ball. And I think when you have Treasure Hunt and people like that shooting threes and making them, that helps Rhyne Howard not have to do it all.

“They just punched us in the mouth early and we didn’t fold our tent. We kept trying to get back in the game. And we cut — didn’t we cut it to 9 at one point? So we kept battling. Just give them credit. Give them credit. They’re on a roll right now.”

LSU fell down early and trailed by 20 at the half, but the Tigers fought back in the third quarter to get the game within nine points. LSU could not sustain its third quarter momentum though as Kentucky pulled away.

The Tigers will return to Baton Rouge and begin preparations for the NCAA Tournament. Selection Sunday will air on ESPN on March 13 at 7 p.m. CT where LSU is expected to hear its name called as a Top-16 seed to host first and second round games in the PMAC.

Khayla Pointer led LSU’s comeback attempt in the third quarter where she scored 11 of her final 27 points. She also dished out 7 assists and grabbed 7 rebounds. Ryann Payne went 6-for-9 and finished with 13 points. Both Faustine Aifuwa and Autumn Newby pulled in 8 rebounds.

Rhyne Howard showed why she is projected to go early in the WNBA Draft, scoring a game-high 32 points and sinking 6 three pointers. Dre’una Edwards had a double-double with 13 points and 10 rebounds while Treasure Hunt scored 13 points and got 7 rebounds.

Kentucky struck first on a 6-0 run before Ryann Payne got the Tigers on the board at the 7:30 mark of the opening quarter. Pointer thread the needle twice down the court  to get Payne the ball on fast breaks to bring the Tigers within two, 8-6. Howard gave the Wildcats a 16-8 lead after sinking two threes in a row. Robyn Benton hit a three a couple possessions later to give Kentucky a 12-point lead, forcing an LSU timeout. Kentucky led 25-13 at the end of the quarter with Howard leading the way with 13 points for the Wildcats.

Aifuwa scored in the post on the first possession of the second half, battling through contact and looking to shift LSU’s first half misfortunes. Cherry then pulled up in transition on the next possession after a Kentucky miss. Through the middle part of the quarter LSU looked sharper, but was unable to make a significant dent in the Kentucky lead, going into the media timeout trailing, 53-37, with 4:07 left in the quarter.

Pointer then scored seven in a row for the Tigers, capped with an and-one at the 2:20 mark, bringing the Tigers within 11. LSU forced a shot-clock violation the the ensuing defensive possession, taking momentum with a ferocious block by Awa Trasi. Pointer then made it nine straight to make it a nine-point game, forcing a Kentucky timeout with 1:27 left in the quarter. LSU went into the fourth quarter trailing, 57-46.

By the 8:09 point in the fourth quarter, Kentucky went back up by 15 and then Howard hit a three, a dagger for LSU’s comeback attempt that put the Wildcats up, 66-48.