No. 3 LSU will face Oklahoma, No. 1 Texas and Baylor this weekend. Tickets on sale at Astros.com. 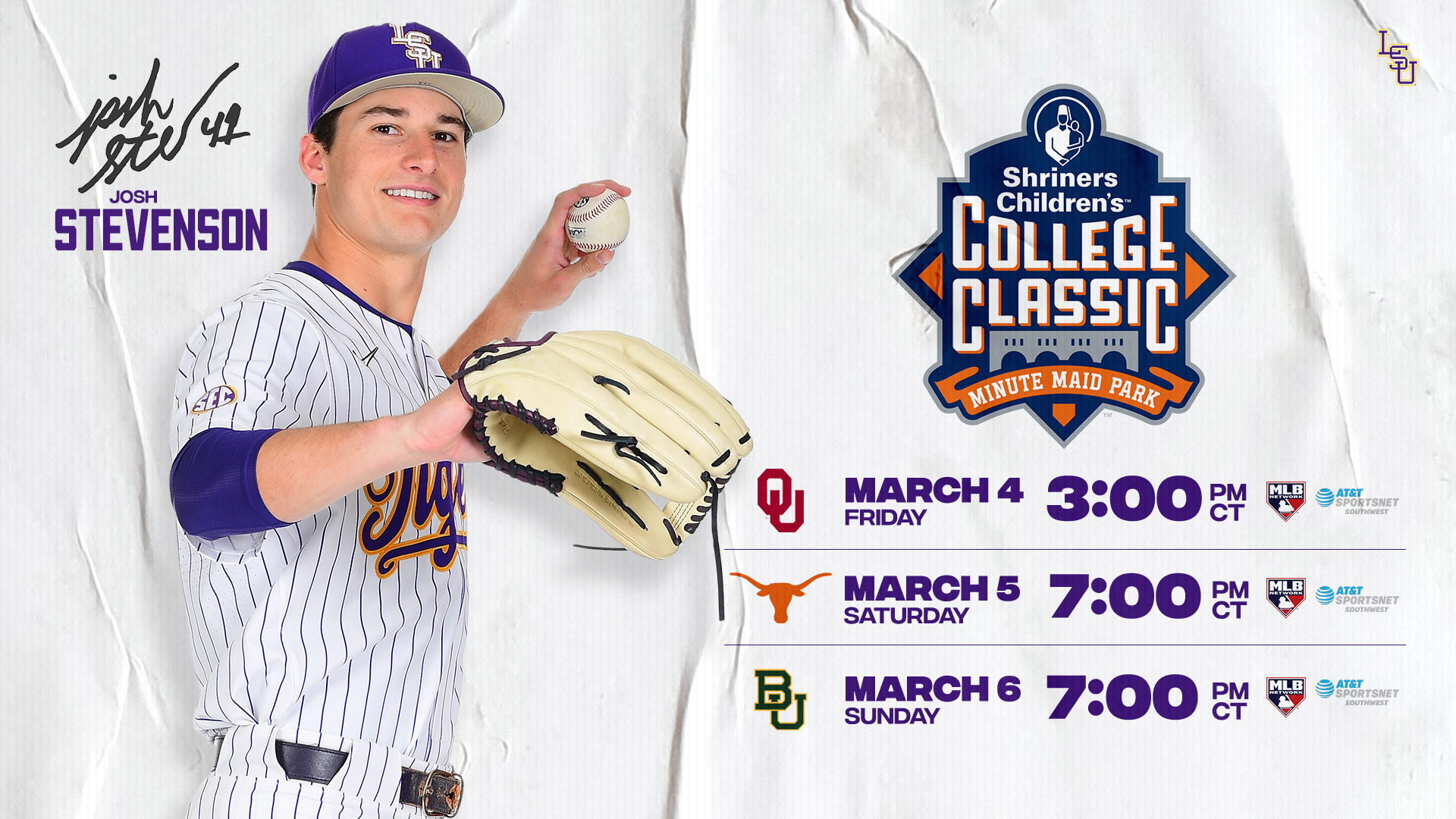 TV/ONLINE
• All games televised live on AT&T Sports Southwest in the Houston Astros’ five-state viewing area (including Louisiana). Outside of the five-state viewing area, the games may be seen on the MLB Network.
• All games streamed live on Astros.com; the Houston Astros Twitter, Facebook and YouTube accounts; and the MLB app. Subscribers to AT&T SportsNet Southwest can also stream all games live on the AT&T SportsNet app.

LSU SERIES RECORD VS. OKLAHOMA
LSU leads Oklahoma, 8-5, in a series that began in 1959 … OU defeated the Tigers,1-0, in the 2020 Shriners Classic in the teams’ most recent meeting … the 2020 game marked the first meeting between the schools since the 2013 NCAA Super Regional in Baton Rouge, when LSU won two straight over the Sooners to advance to the College World Series … three other LSU-OU matchups have occurred in the NCAA Tournament, all LSU wins in Baton Rouge … the Tigers defeated OU in the second round of the 1997 NCAA South I Regional in the original Alex Box Stadium, where LSU posted a 14-3 win over the Sooners … the teams met in the second round of the 1991 NCAA South Regional, where LSU defeated Oklahoma, 4-3 … the first NCAA Tournament meeting took place in 1986 when LSU recorded an 8-5 victory over OU in the NCAA South I Regional.

LSU SERIES RECORD VS. TEXAS
Texas leads the all-time series with LSU, 25-13-1; the Tigers posted a 4-3 win over the Longhorns in the 2020 Shriners College Classic in the teams’ most recent meeting … Texas recorded a three-game regular-season sweep of the Tigers in Austin in 2019, and the teams also met in a regular-season series in Baton Rouge in 2018, when LSU won two of three over UT … the 2018 series was the first meeting between the schools since the 2009 College World Series Finals in Omaha, Neb., where LSU won two of three games over the Longhorns to claim the ’09 National Championship … LSU and Texas each have won six College World Series titles, which is the second-highest total in NCAA Division I history and trails only Southern California, which has 12 baseball national championships.

QUOTING COACH JAY JOHNSON
“There’s a lot to look forward to this weekend. The Astros have been so good the last several years, you always see Minute Maid Park during the playoffs. This event also carries a little more weight because of Alex Bregman being with the Astros, and he’s one of the greatest LSU players of all time. Our players are really fired up; we’re going to take each game as it comes, and not focus so much on the opponent, but more on how we play. It should be a lot of fun, and our kids come to LSU to play in these types of games. I’m trying to keep it in perspective – the things that we’ve done so far to be successful are the same things we’re going to need to do this weekend. There will be a lot of season left after this weekend, but I know our players are really looking forward to it.”

ABOUT THE TIGERS
• LSU has a 5-4 all-time record in the Shriners Classic with appearances in 2015, 2017 and 2020 … LSU swept Houston, Baylor and Nebraska in the 2015 event, and in 2017 the Tigers sandwiched a win over Baylor in between losses to TCU and Texas Tech … in 2020, LSU defeated Texas before dropping consecutive decisions to Baylor and Oklahoma.
• LSU has won five straight games, including an 11-3 victory over New Orleans Wednesday night in Alex Box Stadium, Skip Bertman Field … Second baseman Cade Doughty homered and drove in three runs Wednesday night, and the LSU bullpen allowed just one unearned run in eight innings … Doughty was 2-for-5 at the plate with a homer and three RBI, and rightfielder Jacob Berry also launched a dinger and scored two runs … first baseman Tre’ Morgan doubled, scored twice and collected two RBI for LSU, which finished with nine hits and 10 walks … LSU freshman right-hander Grant Taylor (1-0) earned his first career collegiate win in relief of starting pitcher Garrett Edwards … Taylor worked two scoreless innings, allowing no hits with two walks and two strikeouts … Taylor, Riley Cooper, Bryce Collins, Paul Gervase and Eric Reyzelman combined to give up just one unearned run on two hits with eight strikeouts over the final eight innings.
• The Tigers posted four straight wins over Towson and Southern last weekend, defeating both Towson and Southern twice and outscoring them by a combined 41-3 in the four games … three LSU pitchers combined to limit Towson to one hit on Sunday, as the second-ranked Tigers posted an 11-1 win … right-handers Ty Floyd, Devin Fontenot and Samuel Dutton combined on Sunday to allow just one run on one hit with five walks and 11 strikeouts … the game marked the first one-hitter for the LSU pitching staff since February 25, 2017, when Jared Poche’ and Russell Reynolds combined to one-hit Maryland.
• LSU outfielder Dylan Crews is batting .526 (10-for-19) with one triple, two homers, 10 RBI, five runs scored and a .625 on-base percentage … he drove in four runs with a triple and a homer in LSU’s Friday night win over Towson … the homer was his first of the season, and he added a second dinger in Sunday’s win over Towson … Crews is now hitting a team-high .485 on the year with one double, three triples, two homers, 14 RBI and 13 runs.
• Sophomore right-hander Blake Money was brilliant last Friday night, as he defeated Towson with seven shutout innings, increasing his scoreless innings streak this season to 14 straight … Money limited Towson to no runs on just two hits – a pair of singles – in seven innings with two walks and seven strikeouts … he fired 96 pitches in the outing, 67 for strikes … Money allowed just one Towson base runner to advance beyond first base over the course of seven innings … he also retired 12 consecutive Towson hitters, a streak that began in the first inning and extended into the fifth inning … Money is 2-0 this season with a 0.00 ERA, a .085 opponent batting average, and three walks and 17 strikeouts in 14 innings.
• LSU is batting .362 as a team during its five-game win streak with nine doubles, one triple, six homers, 55 total hits and 52 runs scored … first baseman Tre’ Morgan is batting .500 (8-for-16) in the last five games with one double, six RBI and eight runs.
• The LSU pitching staff has posted a 1.05 ERA during the Tigers’ five-game win streak … the Tigers have limited opponents to five earned runs on 18 hits and a .122 batting average in the past five games … sophomore right-hander Ty Floyd fired five shutout innings in LSU’s combined one-hitter on Sunday versus Towson … Floyd (2-0) limited Towson to one run on one hit with three walks and five strikeouts … senior right-hander Devin Fontenot relieved Floyd and blanked Towson for three innings with no hits, two walks and four strikeouts, and freshman right-hander Samuel Dutton made his collegiate debut in the ninth inning, recording a scoreless frame with two strikeouts … sophomore right-hander Will Hellmers earned the win in Sunday’s second game of the day versus Southern, firing four shutout innings with one walk and four strikeouts.

ABOUT THE OPPONENTS
• Oklahoma is 5-2 this season, and the Sooners are hitting .219 as a team with nine doubles, one triple, three homers and 22 steals in 27 attempts … infielder Peyton Graham leads the Sooners with two homers and infielder/outfielder Tanner Tredaway has a team-best five RBI … OU’s pitching staff has a 3.05 cumulative ERA.
• Top-ranked Texas is 9-0 on the year, and the Longhorns are hitting .300 as a team with 22 doubles, four triples, five homers and eight steals in 10 attempts … infielder Ivan Melendez has three doubles, two homers and 12 RBI, and catcher Silas Ardoin has four doubles, one homer and nine RBI … the UT pitching staff has a 0.67 cumulative ERA.
• Baylor is 4-4 on the year, and the Bears are batting .240 with nine doubles, two triples, two homers and seven steals in seven attempts … infielder/outfielder Kyle Nevin has recorded one double, one homer and six RBI, while infielder Tre Richardson has two doubles, one homer and five RBI … the Baylor pitching staff has a 2.75 cumulative ERA.