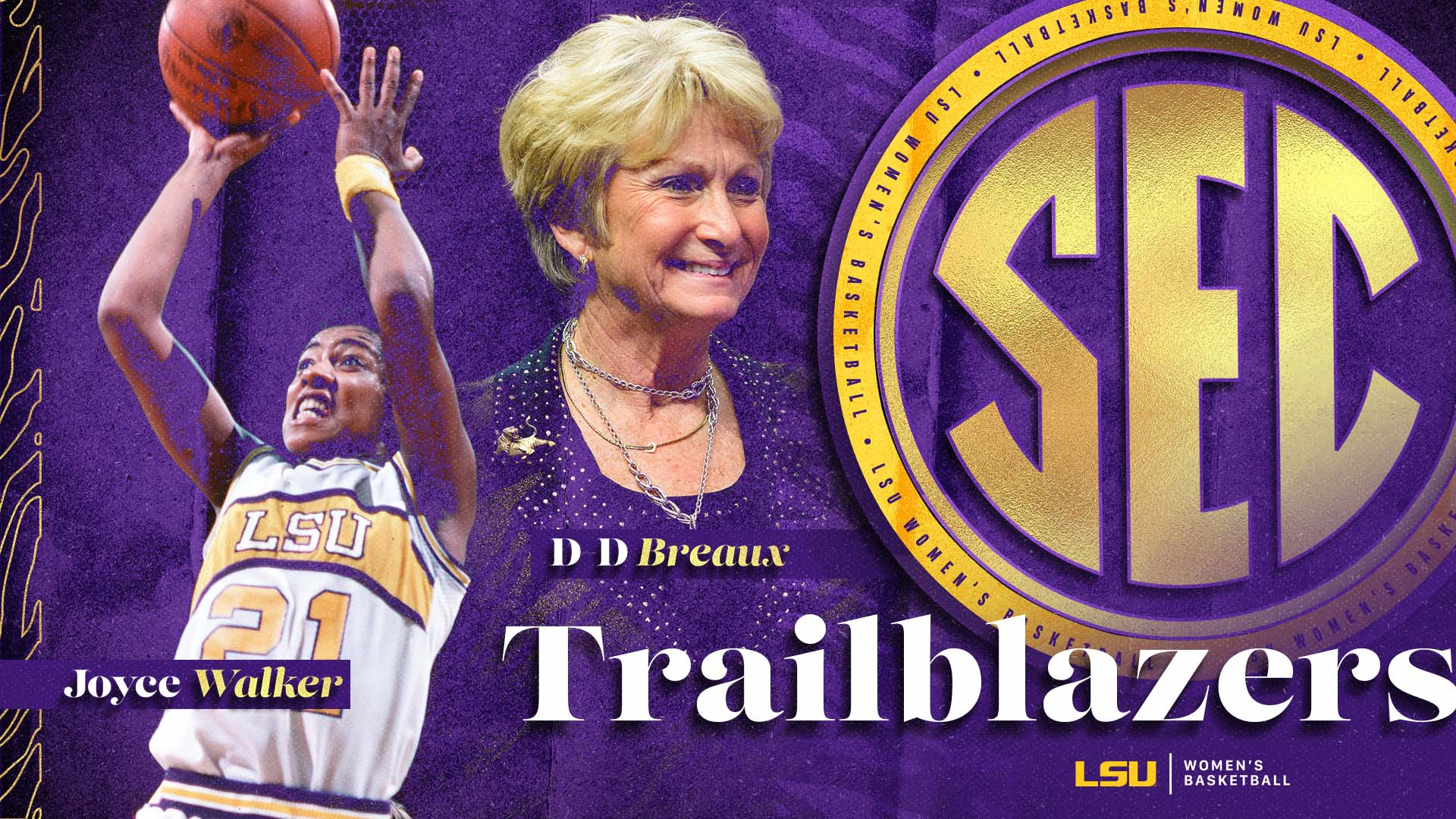 NASHVILLE – In conjunction with the Southeastern Conference’s 50th anniversary of Title IX celebration, LSU’s DD Breaux and Joyce Walker are part of a distinguished group of individuals from all 14 SEC member institutions that will be honored this week at the SEC Women’s Basketball Tournament.

Known as SEC Trailblazers, this group has contributed to the advancement of women and the growth of women’s athletics at their universities and within the Southeastern Conference.

Breaux built LSU Gymnastic from the ground up into the national powerhouse it is today. For 43 years Breaux represented the university and state before retiring in August 2020 as the longest tenured head coach for any sports in Southeastern Conference history.

LSU Gymnastics is known nationally thanks to Breaux’s work in the gym and the community. Her dedication to the student-athlete on an individual basis has transcended into academic success, community involvement, Coach of the Year honors, SEC Championships, NCAA Regional Championships and top-10 national rankings throughout her tenure.

The passion Breaux showcased in 43 seasons never wavered. Breaux worked tirelessly to make LSU gymnastics the most exciting and family-friend event in the city, state and country. Friday night inside the Maravich Center is a major attraction in Baton Rouge, and the attendance records have been rewritten thanks to the hard work by Breaux and her staff.

The 25-best attended meets in school history came during the Tigers’ explosion. LSU exceeded 13,000 fans on four different occasions and in 2018, the program sold out the PMAC against Alabama and Kentucky. LSU set the single-meet attendance record with 13,729 in the arena to watch the Tigers take down the Crimson Tide.

In competition, LSU put together one of the most consistent programs in the nation with four-straight NCAA Championship Finals appearances, three-straight SEC meet championships and two SEC regular season titles during Breaux’s final years as head coach.

Breaux is considered a pioneer of collegiate gymnastics and women’s sports. She never stopped advocating for her program since being named head coach in 1978. At the beginning of her career, the Tigers trained in a corner of the Carl Maddox Field House. They now utilize the top gymnastics training facility in the world.

Walker holds the distinction of being the first player in LSU history to be named to the prestigious State Farm All-America team twice. Walker, considered by many to be one of the best players in SEC history, was a three-time selection to the Basketball News All-America team.

When her career was completed, Walker was the only player in LSU history to rank in the school’s top 10 in scoring, rebounding, assists, steals, and blocked shots. Currently, Walker is LSU’s all-time leading scorer, 12th in rebounding, fifth in assists, second in steals and 11th in blocked shots. In the summer of 1997, Walker was elected to the Louisiana Sports Hall of Fame.

Each trailblazer will be honored on court during half-time of their team’s first game of the tournament, as well as with the full group of honorees on semifinal Saturday.

The SEC will have a year-long celebration of the anniversary of Title IX, the landmark legislation enacted half a century ago that has had a dramatic and lasting impact on opportunities for women in collegiate athletics.

Under the banner of “50th Anniversary of Title IX: Creating Opportunities,” the SEC’s celebration will include recognitions at Conference championship events, commemoration of achievements through online and social media channels, commemorative memorabilia and a collaboration with the SEC Network highlighting the advancement of women’s sports.