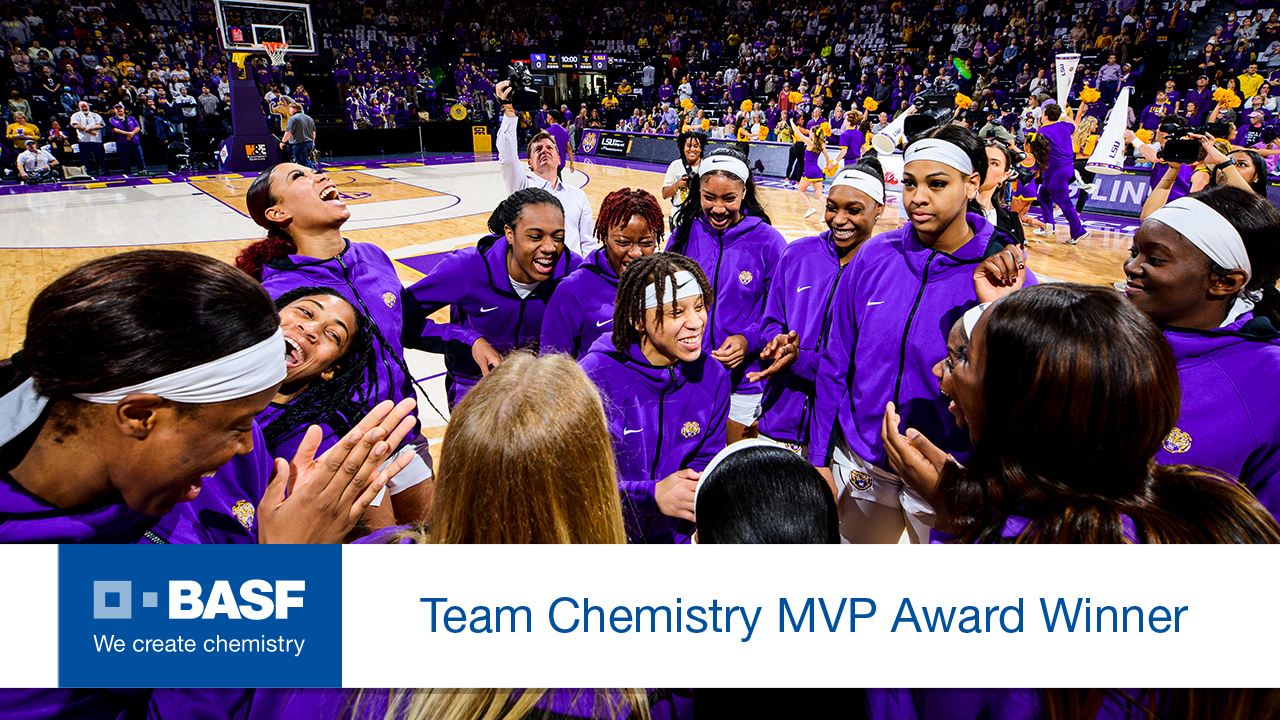 Baton Rouge, La. – A perfect record of 7-0 including ranked wins over three opponents in the month of February has earned the LSU women’s basketball team BASF Team of the Month honors.

The Tigers have won eight straight overall and locked up the No. 2 seed in the SEC Tournament thanks to their stellar play in February to close out the regular season. LSU will take on the winner of Kentucky vs. Mississippi State on Friday night in Nashville to get postseason play started at the SEC Tournament; tip-off for that game will be at 6 p.m. CT.

The Tigers are ranked No. 6 in the nation as they head into postseason play as they reeled off wins against Ole Miss, No. 17 Georgia, Texas A&M, Mississippi State, No. 17 Florida, Alabama, and No. 16 Tennessee in the last month. LSU currently sits at 25-4, 13-3 in the SEC, on the season and is projected as a two-seed in the NCAA Tournament.

The Tigers started the month of February with a road win over Ole Miss on Feb. 7 in Oxford. LSU won by a score of 68-64 due in large part to Khayla Pointer’s second triple double of the season with 16 points, 11 boards, and 10 assists. Faustine Aifuwa was big in the game too with a double double of her own as she registered season highs in points (20) and rebounds (16).

LSU followed the Ole Miss win with a 73-67 win over No. 17 Georgia just three days later in the PMAC. Alex Morris paced the scoring corps for LSU with 26 points in the game, while Pointer (21) and Jailin Cherry (18) pitched in with quality scoring efforts as well.

It was a big one and LSU fans showed out as the fourth largest crowd in LSU women’s basketball history, 13,620 fans, helped will the Tigers to a 66-61 win over Florida. Aifuwa literally wouldn’t allow Florida to get a good look in the final minute of the contest as she blocked two straight shots on a Florida possession late in crunch time.

LSU rounded out the month of February with a 58-50 win over Alabama on Feb. 24, and a crucial 57-54 win over No. 16 Tennessee on Feb. 27 to secure the two seed in the SEC Tournament. LSU jumped out to a 14 point lead on the road in Knoxville, but had to stave off a late comeback attempt by the Vols. Cherry (14p/10r) and Pointer (12p/14r) both had double-doubles, and Autumn Newby came out the gates hot with 10 points in the first quarter to get LSU started off on the right foot.