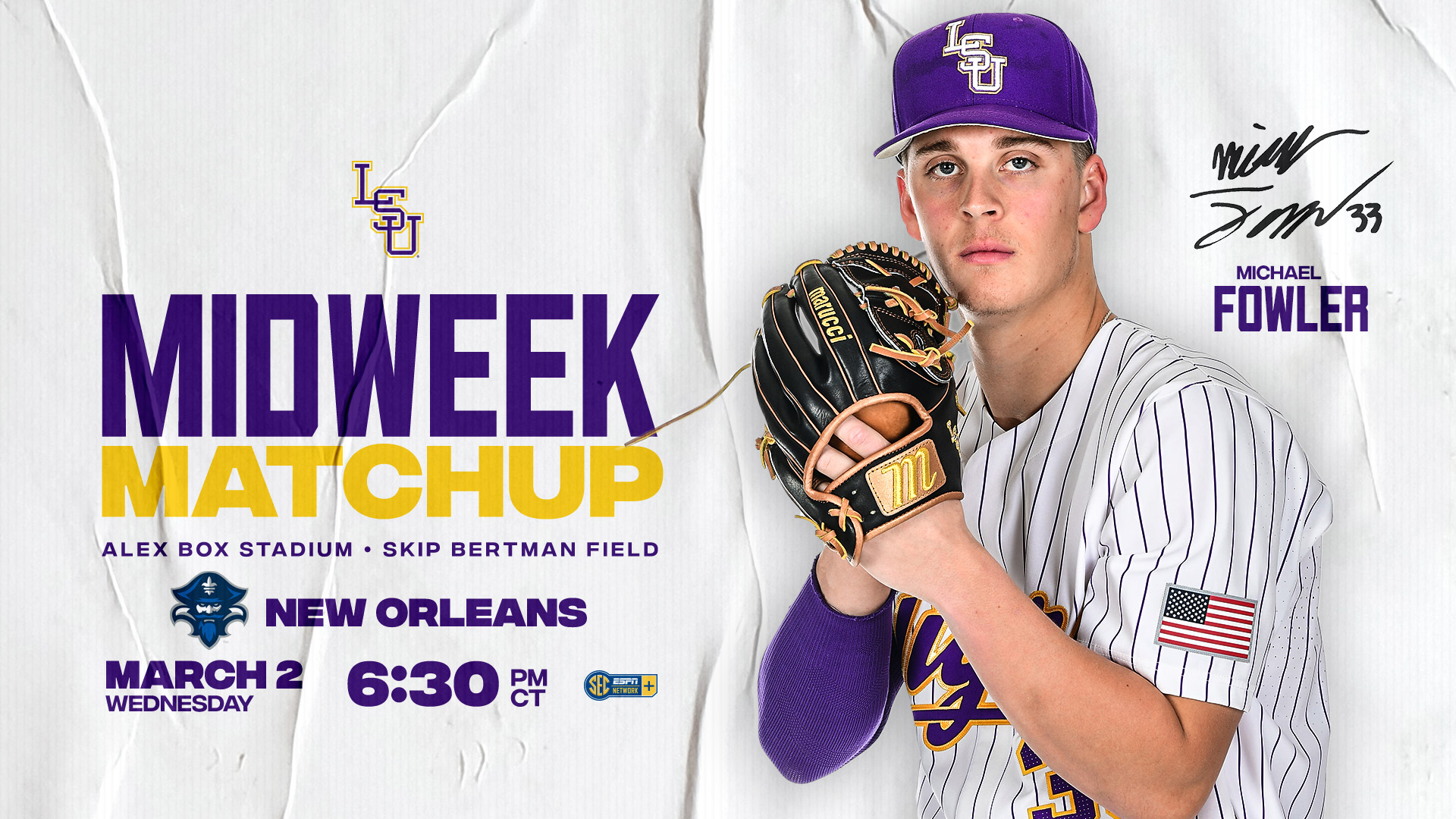 LSU SERIES RECORD VS. NEW ORLEANS
LSU leads the all-time series with New Orleans, 62-36, including a 5-0 win over the Privateers last season (March 10) in New Orleans. The Tigers have won 11 of the past 13 matchups between the schools. Wednesday’s games marks UNO’s first appearance in Alex Box Stadium since May 14, 2019, when LSU posted a 7-5 win over the Privateers. Former LSU coach Paul Mainieri played for two seasons at UNO under former Privateers coach Ron Maestri in 1978 and ’79. Seventh-year UNO coach Blake Dean played at LSU under Mainieri from 2007-10 as an outfielder/first baseman, earning 2008 first-team all-America honors and helping lead the Tigers to the 2009 College World Series title.

QUOTING COACH JAY JOHNSON
“Our fans were great all weekend, and we’re counting on them being out here on Wednesday and getting our team ready to roll. This is the most important game of the season, because it’s the next game, and UNO has a very good team. I thought our pitchers were great in the strike zone over the weekend and kept control of the count. They seemed to be 0-2 and 1-2 in the count a lot, and it gave them the flexibility to throw what they wanted, where they wanted. They didn’t allow the other teams to get any kind of momentum going; everybody we ran out there did their job. What we try to drive home to our players, it’s not about who we play, it’s how we play, because regardless of how this week goes, we have 12 weeks of baseball left in the regular season right now. We want to play well and win every game that we play.”

ABOUT THE TIGERS
• LSU won four of five games last week, including four straight wins over Towson and Southern over the weekend … the Tigers defeated both Towson and Southern twice, outscoring them by a combined 41-3 in the four games … three LSU pitchers combined to limit Towson to one hit on Sunday, as the second-ranked Tigers posted an 11-1 win … right-handers Ty Floyd, Devin Fontenot and Samuel Dutton combined on Sunday to allow just one run on one hit with five walks and 11 strikeouts … the game marked the first one-hitter for the LSU pitching staff since February 25, 2017, when Jared Poche’ and Russell Reynolds combined to one-hit Maryland.
• LSU outfielder Dylan Crews led LSU to four wins in five games last week, batting .444 (8-for-18) with one triple, two homers, nine RBI, four runs scored and a .565 on-base percentage … he drove in four runs with a triple and a homer in LSU’s Friday night win over Towson to highlight the weekend … the homer was his first of the season, and he added a second dinger in Sunday’s win over Towson … Crews is now hitting a team-high .483 on the year with one double, three triples, two homers, 13 RBI and 12 runs.
• Sophomore right-hander Blake Money was brilliant on Friday night, as he defeated Towson with seven shutout innings, increasing his scoreless innings streak this season to 14 straight … Money limited Towson to no runs on just two hits – a pair of singles – in seven innings with two walks and seven strikeouts … he fired 96 pitches in the outing, 67 for strikes … Money allowed just one Towson base runner to advance beyond first base over the course of seven innings … he also retired 12 consecutive Towson hitters, a streak that began in the first inning and extended into the fifth inning … Money is 2-0 this season with a 0.00 ERA, a .085 opponent batting average, and three walks and 17 strikeouts in 14 innings.
• LSU batted .342 as a team last week in its five games with eight doubles, one triple, five homers, 53 total hits and 47 runs scored … leftfielder Gavin Dugas and rightfielder Jacob Berry each drove in six runs, while designated hitter Brayden Jobert and first baseman Tre’ Morgan had five RBI each … Jobert slugged two homers last week, increasing his team-leading season total to four dingers … shortstop Jordan Thompson hit .438 (7-for-16) with two doubles and eight runs scored.
• Sophomore right-hander Ty Floyd fired five shutout innings in LSU’s combined one-hitter on Sunday versus Towson … Floyd (2-0) limited Towson to one run on one hit with three walks and five strikeouts … senior right-hander Devin Fontenot relieve Floyd and blanked Towson for three innings with no hits, two walks and four strikeouts, and freshman right-hander Samuel Dutton made his collegiate debut in the ninth inning, recording a scoreless frame with two strikeouts … sophomore right-hander Will Hellmers earned the win in Sunday’s second game of the day versus Southern, firing four shutout innings with one walk and four strikeouts.

ABOUT NEW ORLEANS
• The Privateers are 5-1 this season with wins over Arkansas-Pine Bluff, Grambling and Alabama State, and a 2-1 series victory over Kansas … UNO is batting .295 as a team with nine doubles, two triples, three homers and six steals in eight attempts.
• UNO is led at the plate by infielder/outfielder Anthony Herron Jr., who his hitting .421 with one double, one triple and four RBI … outfielder Pearce Howard is hitting .364 with one double, one homer and a team-high 11 RBI, and infielder Armani Larry is second on the club with five RBI, and he leads the team with eight runs scored.
• The Privateer pitching staff has a 2.65 team ERA with 50 strikeouts in 51 innings … UNO is allowing just a .214 cumulative opponent batting average.