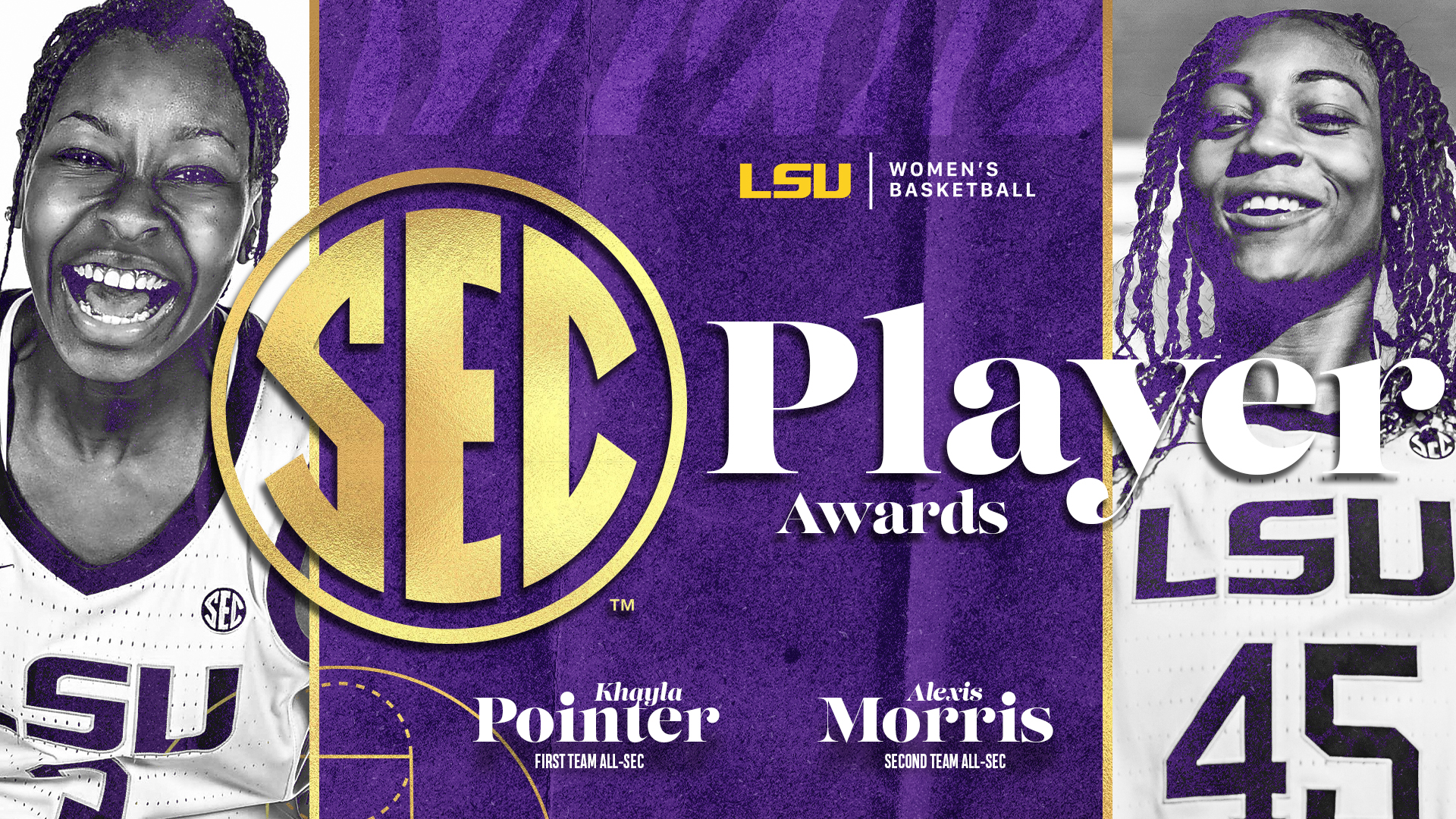 BIRMINGHAM, Ala. – LSU’s dynamic guard duo of Khayla Pointer and Alexis Morris both earned All-SEC Honors on Tuesday as Pointer was named to the first team and Morris to the second team.

Pointer and Morris are the only players from the same team to rank inside the Top-10 in the SEC in scoring, helping LSU score 74.1 points per game to rank second in the conference. The Tigers have their first 25-win regular season since 2007-08 and will enter the SEC Tournament as the No. 2 seed later this week.

This marks the third year in a row that Pointer has earned All-SEC honors and the second straight season she has been on the First Team. The Marietta, Georgia native will go down as one of the best players in program history. Earlier this season she became the first players in LSU men’s or women’s history to put up 1,500 points, 500 assists and 500 rebounds in a career. She is also one of just five players in SEC history with multiple career triple-doubles, both coming this season, and she has dished out the second most assists in program history.

Averaging 18.7 points, 6.5 rebounds and 5.1 rebounds, Pointer is on pace to set new career marks in each of those categories. She has scored 20+ points in 14 games and had a stretch of 16 straight games scoring in double figures. Pointer became the first LSU player since Seimone Augustus to score 35 points during the Tigers’ game at Florida. Including her two triple-doubles, Pointer has seven total double-doubles this year.

Starting all 29 games, Pointer’s durability has been elite. She has played every minute of 12 games, including all 45 minutes of LSU’s overtime game against Missouri when she hit the game-winning layup with 5.7 second remaining. Pointer leads the SEC and is No. 2 in the nation averaging 36.8 minutes per game.

In her first season at LSU, Morris has electrified the Tigers’ offense with 15.8 points per game. During SEC play she averaged 17.3 points per game. After transferring to LSU from Texas A&M, Morris scored in double-figures in her first 11 games wearing purple and gold. She helped LSU pick up its first ranked win over No. 14 Iowa State on December 2 with a new career high 25 points. In the game against the Cyclones the Beaumont, Texas native hit five triples. Soon enough she set a new career high with 30 points against her former team on January 2 versus Texas A&M.

Morris has been a go-to player in late game situations for the Tigers. Her and Pointer both scored 16 second half point in LSU’s second matchup against Texas A&M in College Station to earn the road victory. In the following game at Mississippi State, Morris took over with 15 fourth quarter points that allowed LSU to close the game on a 17-3 run. She has clinched multiple games for the Tigers, sinking free throws down the stretch.