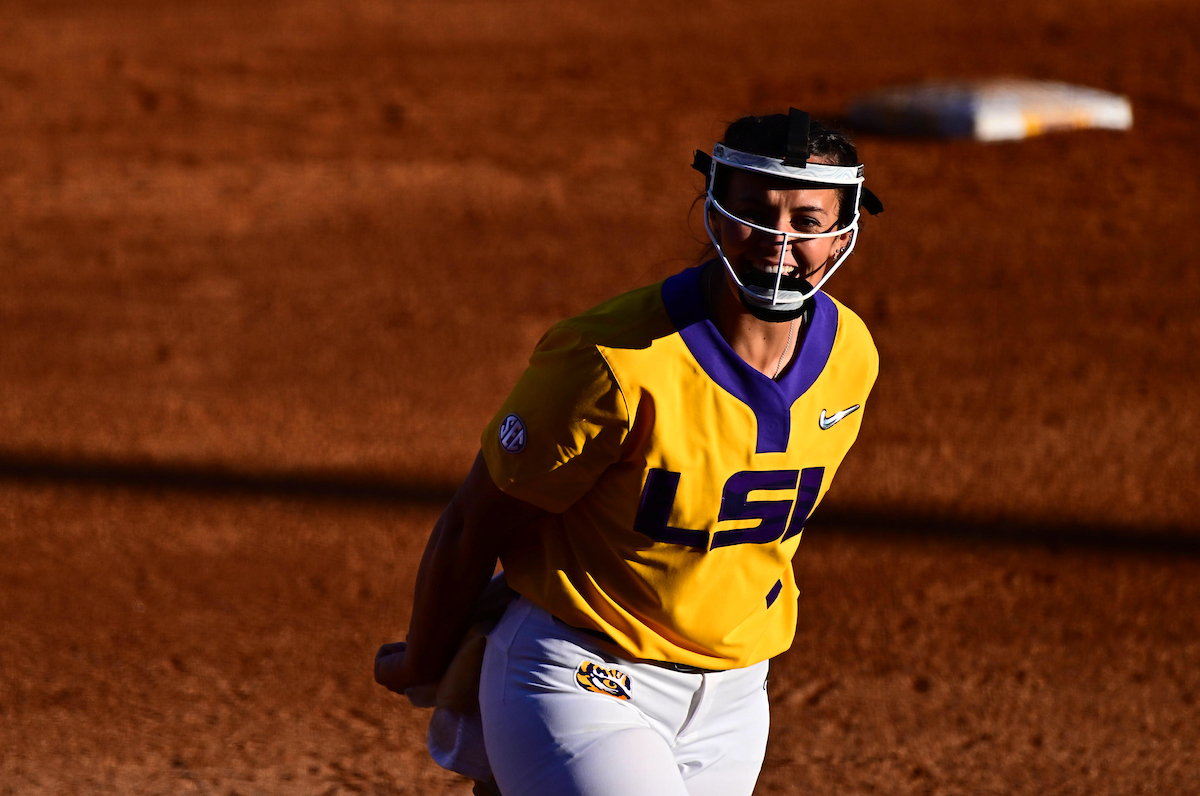 LSU increases its winning streak to seven after going 6-0 in the home tournament.

The Tigers pitching staff allowed only two hits throughout both games Sunday, as Shelby Wickersham and Emilee Casanova combined for a one-hit shutout against Purdue, and Ali Kilponen logged a complete game one-hit shutout against Stephen F. Austin.  Overall, the staff held the opposing teams to a .054 batting average with 17 strikeouts and six walks in 12.0 innings pitched.

LSU recorded a .354 batting average behind 17 hits and outscored their opponents 22-0. The Tigers also drew 14 walks and had eighth stolen bases.

Danieca Coffey and Ciara Briggs each logged three hits to lead the team, while Georgia Clark and Ali Newland both registered four RBI on the final day of the tournament.

The Tigers scored 17 runs on 14 hits, both season highs. Coffey led the way going 3-for-3 at the plate to extend her hitting streak to 14 games and scored three runs. Briggs and Cait Calland each had two hits and an RBI, while Jordyn Perkins had two hits and two RBI.

LSU started the bottom of the third with back-to-back bunt singles from Coffey and Briggs. Both runners advanced a base on a Pleasants sac bunt, and Sunseri drove in Coffey with the third single of the frame. Clark drew a walk to juice the bases for Newland, who hit a three-RBI triple to right center. Newland came in to score on a wild pitch, making the score 6-0 to prompt a Purdue pitching change. The Tigers ended the third with five runs on five hits.

The Tigers exploded for 11 runs in the fourth inning, highlighted by an RBI double from Briggs and two RBI singles from Jordyn Perkins. LSU racked up six hits in the half inning to seal the 17-0 victory.

Wickersham (1-3) earned her first win of the season with five strikeouts, three walks and one hit in 4.1 innings pitched. Casanova closed out the game with one strikeout in 1.0 innings to complete the combined shutout.

Kilponen retired nine of the first 10 batters she faced through the first three innings against SFA, and Pleasants got the scoring started for LSU with a sacrifice fly in the bottom of the third.

Clark gave the Tigers a little breathing room with a three-run shot to centerfield, and after Newland reached on an error, McKenzie Redoutey doubled to cross another run and increase their lead to 5-0 through five innings.

Kilponen closed the door by retiring the final six Lady Jacks, including four strikeouts to bring her total to a season-high 11K’s and gave up only one walk in her sixth complete game and third shutout of the season.

“I think we needed to do that just to put ourselves in a good spot moving forward. I thought we took care of everything we needed to. It will set us up for hopefully a good week and a good start to march here this week.”

On Wickersham and Kilponen’s one hitters…

On overall performance and winning all six games…

“I think it went really well. I think this weekend was needed for like a self-esteem boost for us to show us that we can keep going and that even though last weekend, and the weekend before was kind of hard, we can bounce back and be right where we need to be.”

On her season so far…

On her one hit performance…

“Honestly, I was just trusting my stuff and relying on my defense. They have been playing well today, so I was just going in there fearless and throwing the best of my stuff and letting it work out that way.”

On the importance of the team going 6-0…

“I think that this weekend was very vital for us. I think it was a good weekend to see that we could hit the ball, play good defense, and pitch the ball. We did all the essentials to get us into a good place for this upcoming weekend.”

Next up for LSU is the ULL Crossover/ LSU Invitational March 3-6 in Lafayette, La. and Baton Rouge.