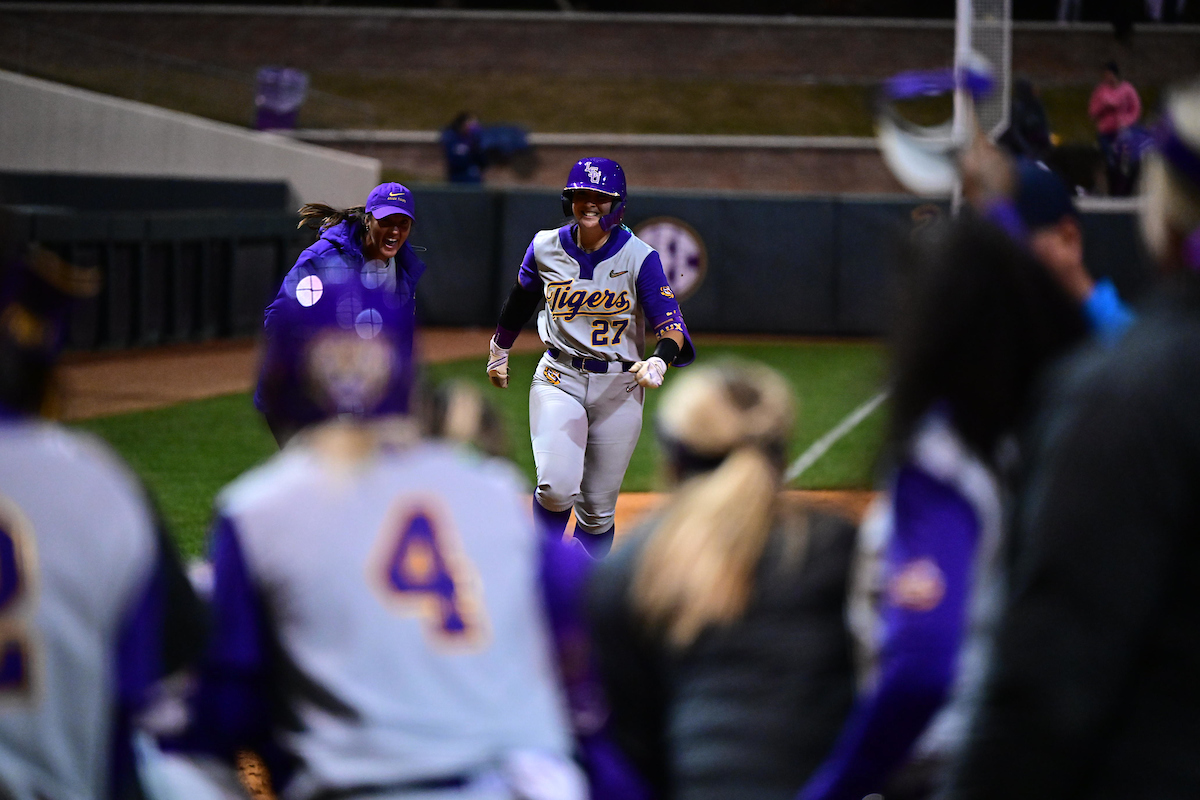 Shelbi Sunseri stole the show on day two with a team-high four RBI and three home runs, including her walk off homer against Drake. It is the Tigers first walk off home run to win an extra inning game since Amanda Doyle did it against No. 13 Baylor, on March 24, 2018. Sunseri also put a solid performance together from the circle, earning the complete game win behind a career-high 11 strikeouts with just three hits, one walk and no earned runs in 10.0 innings pitched in the nightcap against Drake.

Ali Kilponen recorded her second shutout of the season, fanning six of the 16 batters she faced as she and Sunseri combined for a 0.00 ERA and held opposing batters to a .102 batting average over 15.0 innings.

Danieca Coffey (.571), Ciara Briggs (.571), and Taylor Pleasants (.500) each had four hits and two RBI on the day. All three logged doubles, while Briggs and Pleasants both had home runs to bring their total base count to eight.

After giving up a hit on the first at bat of the game, Kilponen retired 13 consecutive batters in the shutout over Purdue. Kilponen bumped her record to 6-1 on the season and had six strikeouts with two hits and no walks in 5.0 innings of work.

LSU scored one run in the first, second, and third inning. In the first, Briggs reached on a fielding error by the second baseman and Pleasants singled to advance her to third.  Briggs zoomed home on an RBI groundout from Georgia Clark.

The Tigers attacked Purdue’s second baseman again in the next inning as Savannah Stewart reached on another error and Coffey singled through the right side to bring her home.

Pleasants followed by logging her second leadoff home run in as many days with a solo shot to right centerfield to open the third inning.

LSU blew the game open with five runs in the fourth frame. Coffey roped in her 10th career multiple RBI game with a double to left field, and Briggs followed with her first home run of the season, forcing a Boilermakers’ pitching change. The change could not slow down the Tigers however, as Pleasants singled to right, and Sunseri sent a moon shot to center field for her fifth homer of the season, bringing the score to 8-0. Kilponen finished off the top of the fifth with a strikeout and popped up two batters to secure the shutout.

LSU set a new season-high with 12 hits and got four doubles and two home runs in the win over Drake. Briggs went 3-for-4 at the plate, while Coffey, Sunseri, and Hayden Brown each logged two hits. Sunseri recorded her second game this season with two home runs, highlighted by her walk off in the 10th inning.

Sunseri dealt a single-game career-high 11 strikeouts in the complete game effort. Dating back to the fourth inning, Sunseri retired 18 of the last 21 batters, including a stretch of 13 straight.

Drake put up two runs in the top of the third inning, but Sunseri cut the deficit in half with a solo shot in the bottom of the fourth for her second homer of the day.

After two scoreless innings, Sunseri struck out the side, leaving the Bulldogs with a 2-1 lead heading into the bottom of the seventh. Ali Newland led off the half inning with a standup double and Coffey moved her over to third with a sac bunt. After Briggs grounded out for the second out, Pleasants faced a 3-2 count before zipping one to right centerfield for an RBI double, tying the game at 2-2 heading into extra innings.

The Bulldogs went three up and three down in the eighth, ninth, and tenth inning with Sunseri retiring 13 consecutive batters dating back to the final out of the sixth. In the bottom of the tenth, Sunseri decided to end it all with a home run to left centerfield on a 3-1 count.

On the performance from Drake Pitcher Nicole Timmons…

“I think she threw a nice game against us. She has a lot of spin, and her rise-ball is a really good weapon for her. She did a good job keeping us off-balance, and like you said, a rise-ball like that is something we do not see all the time. She did a nice job and we were lucky to get one there at the end.”

On the performance from Pitcher Shelbi Sunseri…

“We are just lucky she is on our team; she is an incredible player. She is our only fifth-year player, and she just looked like our leader tonight. We count on her a lot to be that leader, be brave, and take us into big situations. She was all of that and more tonight, without question.”

On her mindset today…

“I went in and watched film; Coach [Torina] and I talked about things, and I just had to go out and have confidence in my stuff and in my team. I just needed to trust the process and all off the work that I have put in.”

On the difference between yesterday and today…

“It was all mental. I went in and knew that I had to have confidence and that my team needed me on the mound. As long as I trusted my defense to play behind me, all I had to do was let them put the ball in play and the defense would have my back.”

On what Shelbi Sunseri means to the team…

“She is what we always talk about wanting to be. She does everything you could ask of a person; she is always there and being a good teammate.”

“I think she is a good pitcher and I think we were just trying to hit the deep ball, and with the wind blowing in, so we needed to get on top of the ball, which isn’t what we usually talk about, so I think we had to rethink our plan and know we need to try to stay on top of the ball.”