No. 2 SEC Women’s Basketball Tourney Seed On The Line In Knoxville Sunday on ESPN2 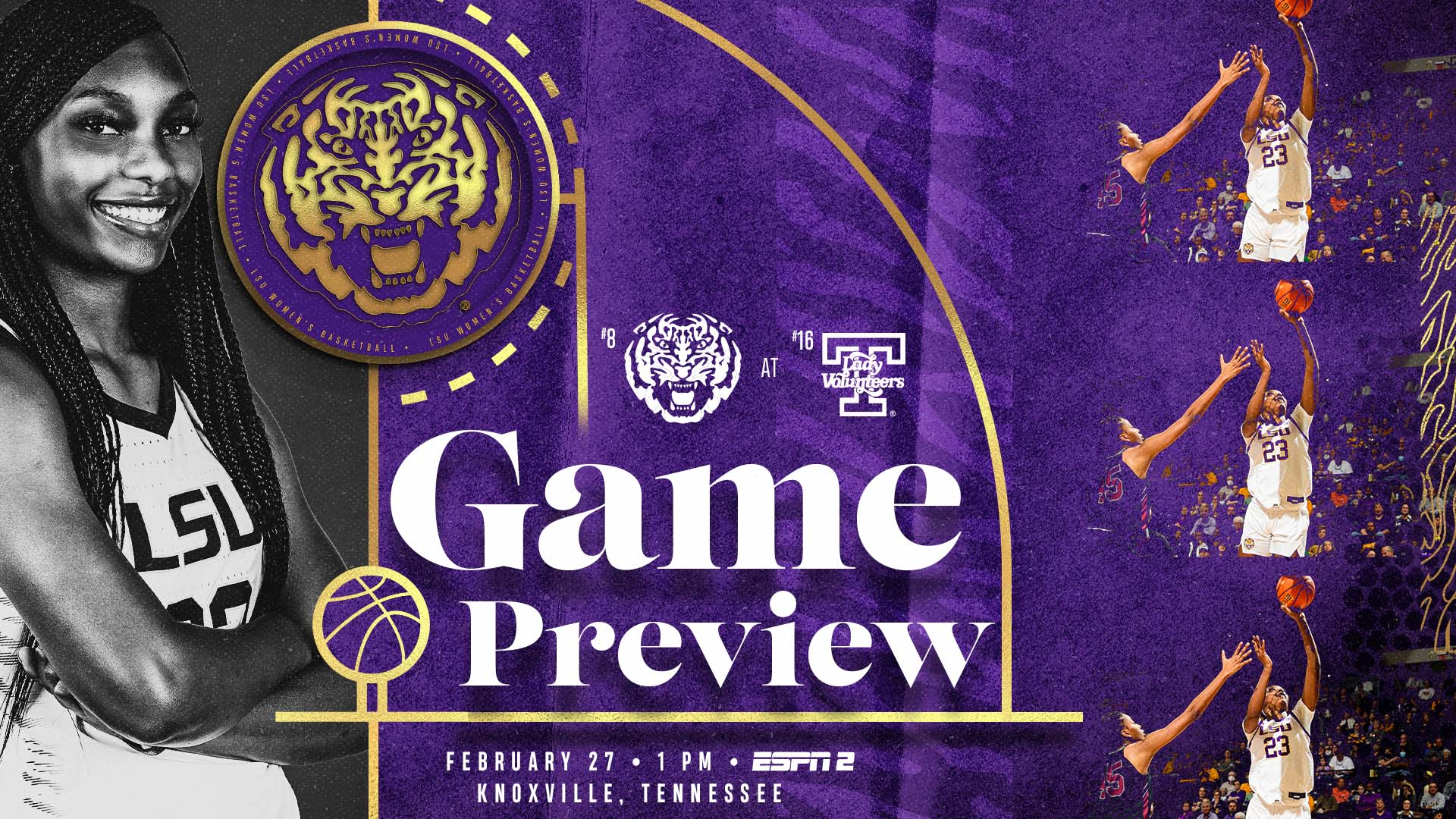 LSU has already shored up at least a share of second place in one of the most talented conferences in the country, but a win on Sunday would secure that position outright in Coach Kim Mulkey’s first season leading the Tigers. Whoever wins in Knoxville will earn the No. 2 seed in the SEC Tournament, scheduled for next week in Nashville. The Tigers have already clinched a double bye in the conference tournament and will not play until Friday in the quarterfinals.

“This team won nine games last year and they just finished behind the No. 1 team in the country in the SEC (South Carolina),” Coach Mulkey said following Thursday’s win over Alabama. “Now we don’t want to share it, but if we go to Knoxville and they play great on senior night, we’re still No. 2.”

Courtney Lyle and Caroline Peck will call the game on ESPN2. Fans can also listen to the game with Patrick Wright and Shaeeta Williams on the LSU Sports Radio Network, 107.3 FM in Baton Rouge. Heading into the final regular season game of the SEC, LSU leads the SEC in scoring with 74.7 points per game.

The Tigers will be without their second leading scorer Alexis Morris who suffered a sprained MCL during the first quarter of LSU’s game on Thursday night against Alabama. LSU is hopeful she will be ready to play in the NCAA Tournament in three weeks. Ryann Payne saw extended minutes on Thursday in Morris’ absence. Morris and Khayla Pointer are the only teammates to both be in the Top-10 in the SEC in scoring.

“I thought they handled it beautifully when Alexis went down; next man up,” Coach Mulkey said. “Ryann went in there, and unfortunately she broke her nose in practice (on Wednesday), but she just battled and did as much as she could possibly do.”

Over the past two games, LSU’s post play has stepped up. With LSU’s guards having an off-shooting game against Florida last Sunday, Faustine Aifuwa and Autumn Newby both scored in double figures. Hannah Gusters also played quality minutes off the bench in the post. That trend continued Thursday against Alabama in a game where the posts went 10-15 from the field. Aifuwa has combined to block eight shots over the past two games.

Pointer bounced back on Thursday following her worst performance of the season Sunday against Florida where she was 1-17 shooting the ball. Against the Crimson Tide on Thursday, she scored 23 points which was her 14th game this season with 20 or more points. She also added nine rebounds and eight assists against Alabama, knocking on the door of what was nearly her third triple-double of the year.

Tennessee started the season 18-1 and looked like a potential one seed in the NCAA Tournament. Since the hot start, the Lady Vols have gone 4-5. Injuries have coincided with Tennessee’s drop in production. In late January, Keyen Greene suffered torn ACL, ending her season. Greene was playing a key role coming off the bench and playing in the post. Last week in Tennessee’s loss at Alabama, Tennessee lost its leading scorer Jordan Horston to a dislocated elbow.

The Lady Vols still have weapons like Tamari Key who is the top shot blockers in the SEC and ranks in the top-five of rebounding too. She has three games this season with 10+ blocked shots and she excels specifically on the offensive glass. In the two games without Horston, Key has stepped up to score 16.5 points per game.

Rae Burrell, Tess Darby and Jordan Walker have all averaged scoring in double figures since Horston’s injury. The Lady Vols are celebrating their seniors Thursday in what should be a great women’s basketball environment at Thompson-Boling Arena. Tennessee is averaging the second largest home attendance in the SEC this season.