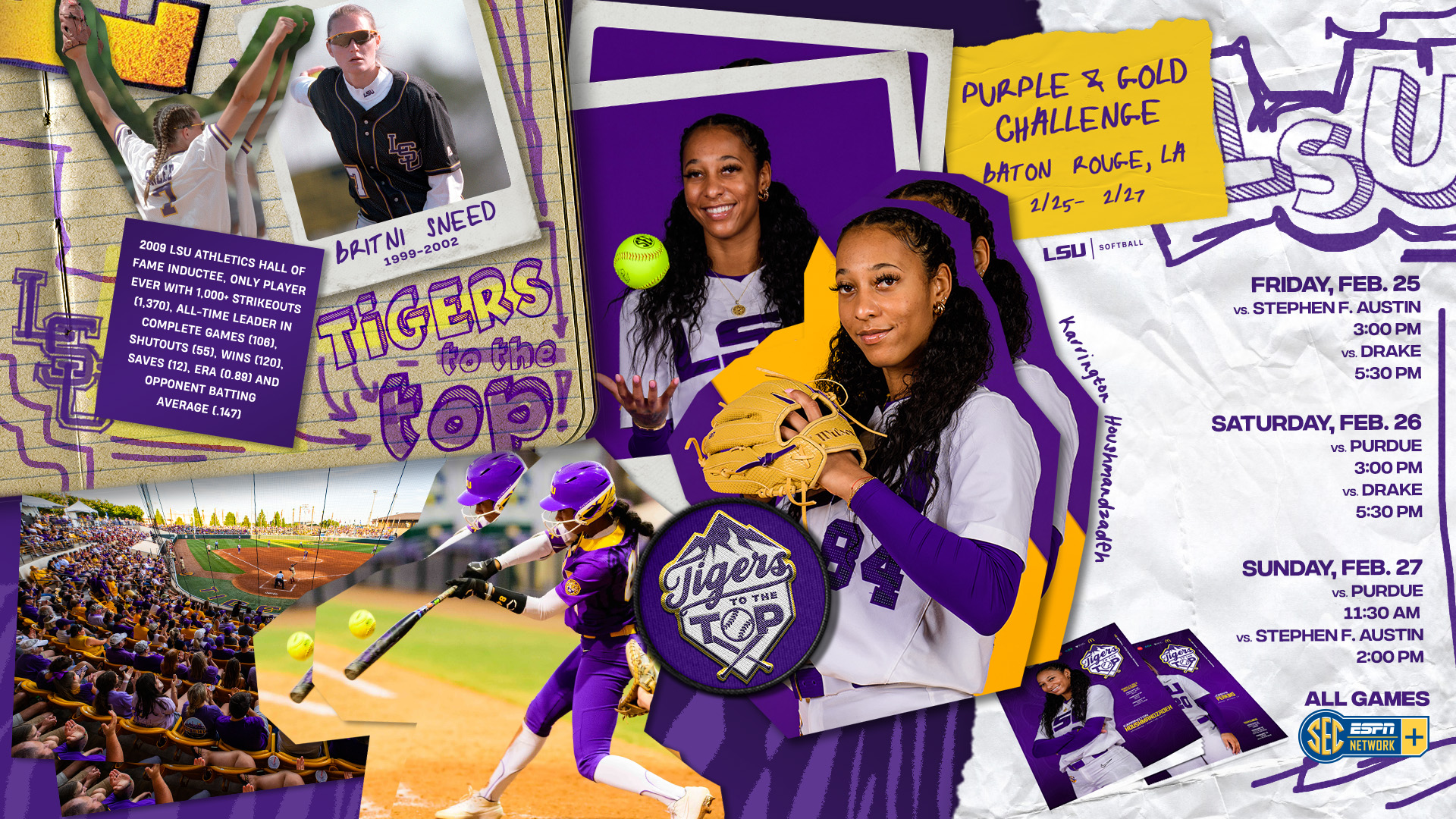 The Tigers will play each team twice over the weekend with all games being streamed on SECN+. LSU will open the tournament with a 3 p.m. game vs. Stephen F. Austin (SFA) and conclude day one with a 5:30 p.m. bout against Drake. Saturday, the Fighting Tigers will take on Purdue at 3 p.m. and close day two with another 5:30 p.m. game versus Drake. LSU will end the tournament with two games on Sunday beginning with an 11:30 a.m. game against Purdue followed by a 2 p.m. game against SFA.

The full schedule for the 2022 Purple & Gold Challenge can be found here.

The Tigers went 2-3 at the St. Pete/Clearwater Invitational highlighted by a 10-2 run-rule win against then-ranked No. 7 Oklahoma State. On the weekend, LSU was led by Danieca Coffey’s .421 batting average and eight hits, while chipping in three RBI and two runs scored. Ciara Briggs and McKenzie Redoutey followed with a .333 batting average. Briggs contributed five hits, three runs, one stolen base, and a Sportscenter No. 1 play that robbed a home run, while Redoutey led the team with six RBI which included a three-run home run against Oklahoma State. Ali Kilponen led the team in the circle with a 2-0 record and logged a 2-0 shutout victory over Texas Tech. Kilponen registered a 0.43 ERA behind 14 strikeouts in 16.1 innings pitched.

In the young season, Coffey leads the team with a .389 batting average and is currently on a nine-game hitting streak. Coffey’s 36 at bats is tied 5th in the SEC and her 14 hits rank No. 11 in the conference. In addition to Briggs’ consistency to get on base (11-game reached base streak, .382 batting average), Shelbi Sunseri and Georgia Clark has produced offensive power in the lineup with four and three home runs, respectively. Sunseri’s four dingers is tied for the second most in the SEC.

Kilponen is 4-1 this season winning all her games when she is the starting pitcher. She has a 1.06 ERA with four complete games and one shutout. Kilponen has handed out just four walks on the season with her 26 strikeouts tied for No. 11 in the league, and No. 4 in the SEC with nine strikeouts looking. Sunseri is 2-1 this season with the ball in her hand. The Santa Fe, Texas native has two complete games and one shutout behind 17 strikeouts and six walks in 23.0 innings pitched.

The Tigers have an overall 16-1 combined record against SFA, Drake, and Purdue.

LSU and Drake will meet for the first time in program history, while the Tigers are 5-0 against Purdue. The last time the Tigers and Boilmakers met in 2018 with LSU winning 6-2.

The Tigers will partake in the ULL Crossover/LSU Invitational March 3-6. LSU will open the tournament with a game versus ULL in Lafayette, before playing the rest of the tournament at Tiger Park against Troy, ULL, LA Tech, and Central Connecticut State.