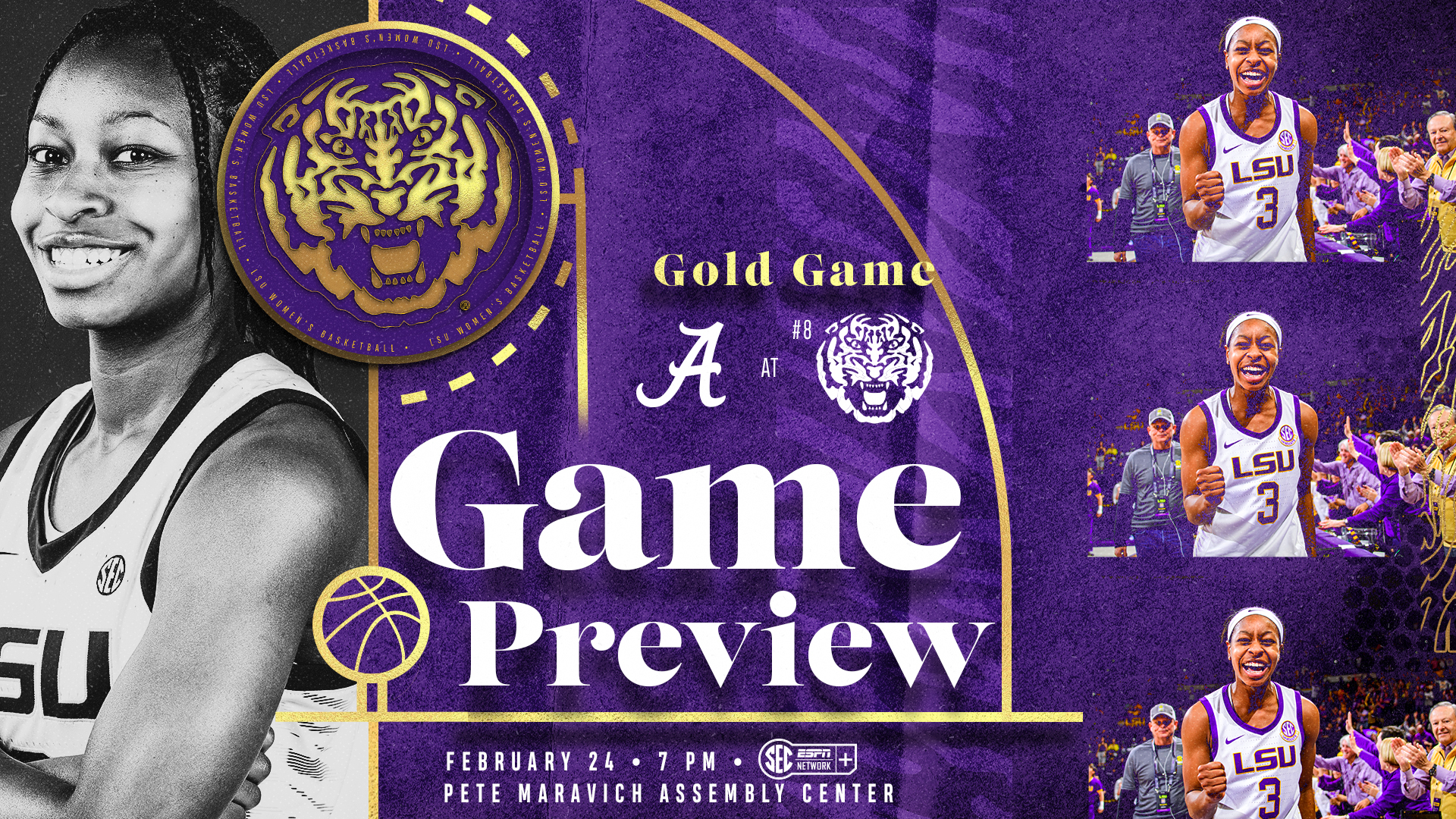 The Tigers will be wearing gold jerseys and fans coming to the game are encouraged to wear gold too.

After winning nine games last season (6 in SEC play) and being picked in the preseason to finish No. 8 in the conference, LSU has surged to No. 8 in the national polls in the first season under Head Coach Kim Mulkey. The Tigers are in position earn a Top-16 seed in the NCAA Tournament which would allow them to host first and second round games inside the PMAC.

“Once we started playing in the SEC, you could gage a little bit that, hey we could compete in this league,” Coach Mulkey said. “Still didn’t think we would be doing what we’re doing. That’s probably my personality. I’m kind of cautiously optimistic. Just stay focused in the moment and let’s just get better every day. You couldn’t project or foresee what we would be doing.”

LSU controls its own destiny and with wins in the final two games of the regular season against Alabama on Thursday and at No. 16 Tennessee on Sunday, LSU would hold sole possession of second place going into the SEC Tournament next week in Nashville. Florida and Tennessee both need two wins this week and an LSU loss to move into a tie for second place. The last time the Tigers finished in the Top-2 of the SEC in the regular season was when LSU won the conference title in 2008.

Thursday will serve as LSU’s senior game and the Tigers will honor Faustine Aifuwa, Jailin Cherry, Khayla Pointer, Autumn Newby and Awa Trasi during a halftime presentation on the floor. LSU’s seniors have been critical to the success of the season.

“You want (seniors) to have an unbelievable last year of college,” Coach Mulkey said. “Every coach wants them to and it doesn’t always work out that way. For anybody to leave this year no matter where we finish, how it all ends, there’s not a negative that can be written.”

The senior class has taken LSU to a place it has not been in 14 seasons – ranked in the Top-10 during the month of February.  Pointer is on multiple National Player of the Year watchlists, Cherry is on pace to have her best statistical season as a Tiger, Aifuwa is playing as one of the top post players in the SEC , Newby has carved out a role as LSU’s top rebounder and gutsy defender and Trasi has played critical minutes off the bench for the Tigers.

Thursday’s game can be streamed on the SEC Network + with Lyn Rollins and Victor Howell. Fans can listen to the game with Patrick Wright and Shaeeta Williams on the LSU Sports Radio Network, 107.3 FM in Baton Rouge.

Alabama is coming to the PMAC looking to make a late season push to be on the NCAA Bubble. The Crimson Tide have won three of their past four games and need to keep winning in order to keep postseason hopes alive. Alabama beat a ranked Tennessee team last Thursday by double-digits and then took down Texas A&M on Sunday in double-overtime. Brittany Davis put up 23 points and grabbed six rebounds in both Alabama games last week to earn SEC Player of the Week honors.

“Kristy’s (Curry) team is fighting to maybe be on that bubble to be talked about as maybe the eighth or ninth team from our league to get a bid,” Coach Mulkey said who coached with Curry at Louisiana Tech. “If you talk about when is the best time to get hot and beat some people – it’s now.”

Davis and Hannah Barber are both threats from beyond the arc, sinking over 50 threes a piece this season. Alabama ranks towards the bottom half in the SEC in all but two statistical categories. The Crimson Tide are No. 3 in the conference in steals per game (9.24) and three-pointer made per game (7.5). JaMya Mingo-Young is No. 4 in the SEC with 2.4 steals per game.