Second-ranked LSU makes its first road trip of the season as the Tigers travel to Ruston to face No. 15 Louisiana Tech. 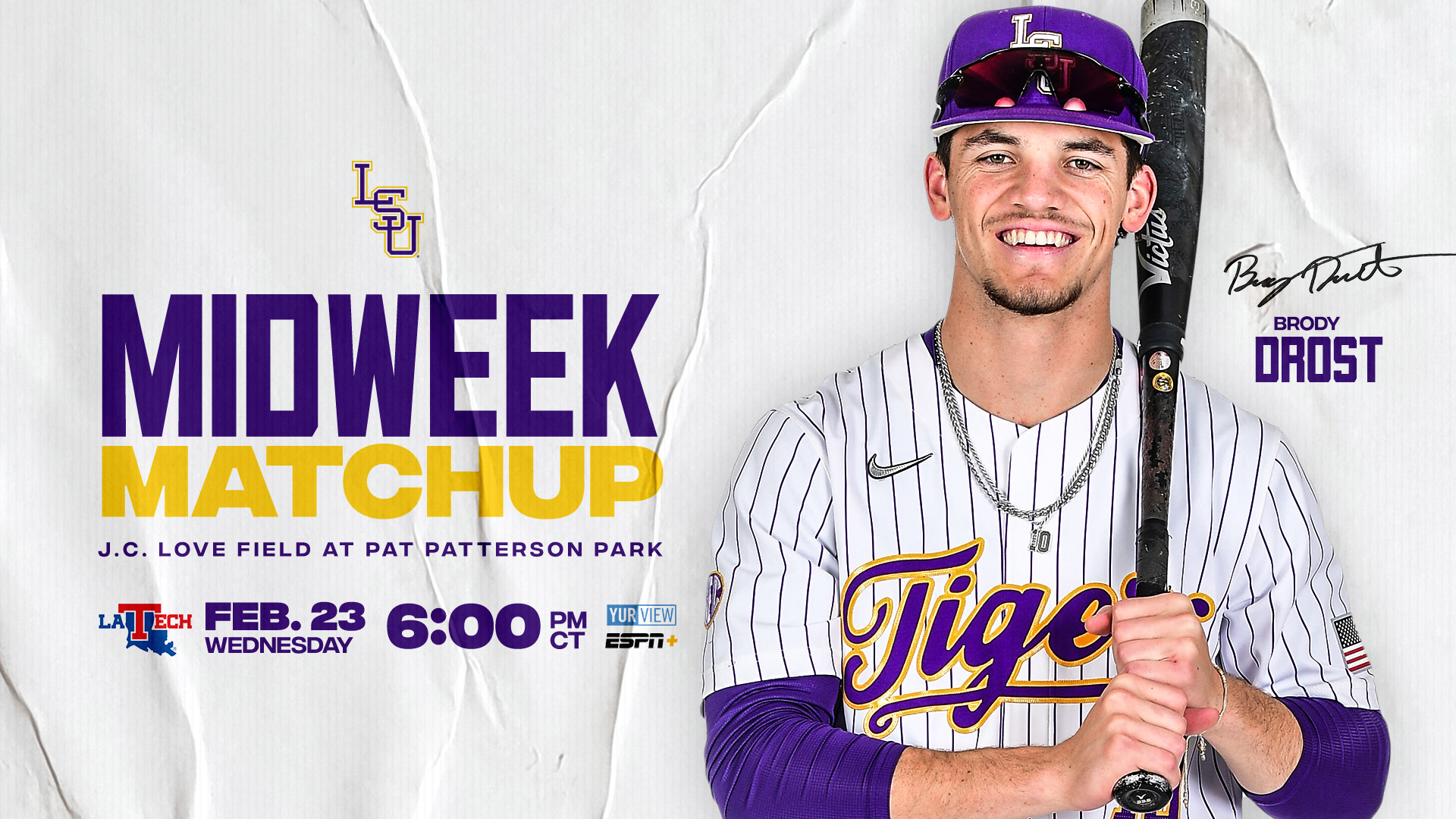 QUOTING COACH JAY JOHNSON
“Louisiana Tech has several veteran players that have impacted their team and made major contributions since they’ve been there. We have a lot of respect for them, and they have a great coaching staff. They’ll be prepared, it will be a great environment, and we’re looking forward to it. It’s our first road game of the season, so we want to develop a sound routine in preparation for the game. I think it will be good for our team to get together and play outside of our own stadium. It will be an environment similar to ones we’ll play in later on, in terms of interest in the game from the home team fans. It’s going to be a great night for college baseball.”

ABOUT THE TIGERS
• LSU opened the 2022 season under first-year head coach Jay Johnson with a three-game sweep of Maine in Alex Box Stadium, Skip Bertman Field … the Tigers scored a combined 51 runs in the three games, marking LSU’s largest run total in a season-opening series … the previous LSU mark in an opening series was 45 runs scored by the 1996 Tigers in a sweep of Western Kentucky in the original Alex Box Stadium.
• LSU’s 51 runs scored last weekend is also the highest in any three-game LSU stretch since 2001, when the Tigers scored 52 runs in wins over Duquesne (twice) and Nicholls … LSU’s 13-1 win on Friday night marked the Tigers’ 21st straight victory in a season-opening game.
• LSU infielder Cade Doughty was named Southeastern Conference Player of the Week Monday after leading the Tigers to a season-opening three-game sweep of Maine over the weekend … Doughty was also voted as one of the Collegiate Baseball newspaper National Players of the Week … Doughty, a redshirt sophomore from Denham Springs, La., hit .571 (8-for-14) with three doubles, two homers, seven runs and 12 RBI in the three-game set versus the Black Bears … his slugging percentage for the weekend was 1.214 and his on-base percentage was .563 … the honor marked the second time Doughty has earned SEC Player of the Week recognition during his career. He was also named the league’s top player on March 15, 2021, after leading LSU to a three-game sweep of UT San Antonio.
• Sophomore right-hander Blake Money was brilliant on Friday night in LSU’s opening game of the 2022 season, as he defeated Maine with seven shutout innings … Money limited the Black Bears to no runs on just two hits – a pair of singles – in seven innings with one walk and a career-high 10 strikeouts … he fired 79 pitches in the outing, 58 for strikes … Money allowed just one Maine base runner to advance beyond first base over the course of seven innings … he retired the first seven batters that he faced and later retired 10 consecutive Maine hitters.
• LSU batted .387 as a team in last weekend’s three-game sweep of Maine … the Tigers collected 11 doubles, three triples and seven homers in the series … designated hitter Brayden Jobert was 6-for-9 (.667) in the series with two doubles, two homers and nine RBI … centerfielder Dylan Crews was 6-for-11 with one double, two triples, four RBI and eight runs … outfielder Giovanni DiGiacomo doubled, homered and collected six RBI, while outfielder Jacob Berry launched two homers and drove in five runs.
• Sophomore right-hander Ty Floyd earned his first career collegiate win on Sunday, limiting Maine to one run on two hits in five innings with a career-high eight strikeouts … sophomore left-hander Javen Coleman picked up a relief victory on Saturday, allowing just one run on one hit in three innings with no walks and three strikeouts … as a staff, LSU pitchers recorded 37 strikeouts in 27 innings and limited Maine to a .200 batting average.

ABOUT THE BULLDOGS
• Louisiana Tech opened the 2022 season last weekend with a three-game sweep of Wichita State in Ruston … the Bulldogs posted a 42-20 overall mark last season and played host to an NCAA Regional in Ruston, where they were eliminated by regional champion North Carolina State.
• Louisiana Tech hit .261 with three homers in its sweep last weekend of Wichita State, and the Bulldogs out-hit the Shockers, 24-21, while outscoring them 21-12 … infielder Cole McConnell homered and drove in six runs in the series, while catcher/outfielder Jorge Corona contributed a homer and four RBI … infielder Taylor Young was 5-for-10 at the plate with a double and six runs scored.
• The Louisiana Tech pitching staff permitted just a .214 batting average for Wichita State, and the Bulldog hurlers recorded 38 strikeouts in 27 innings.