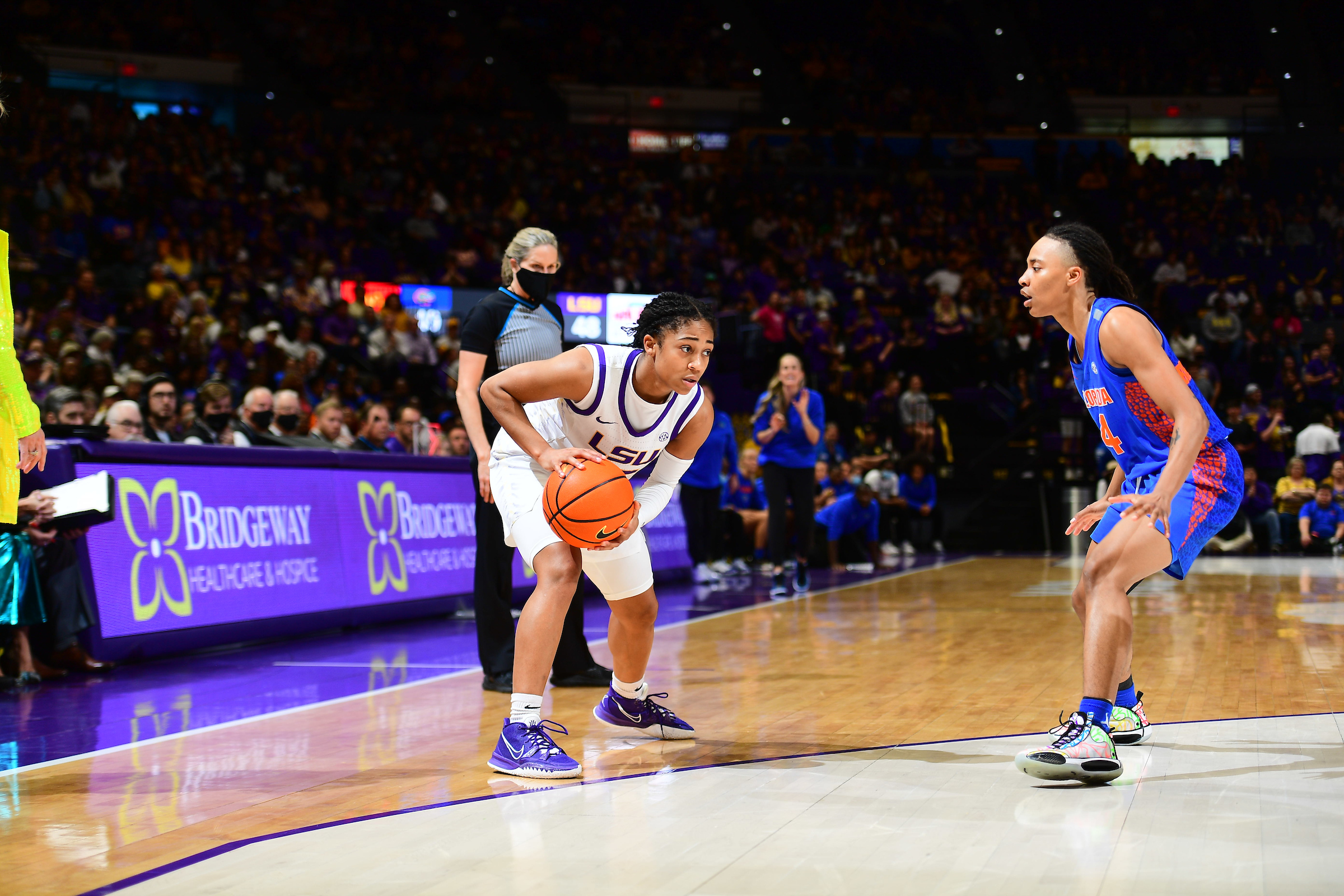 The announced attendance was 13,620 – the fourth largest crowd in LSU Women’s Basketball history.

“​​The message was that since we don’t play again for four days, we had the opportunity to be in sole possession of the second ranked spot in the SEC,” Head Coach Kim Mulkey said her message was to the team before the game. “I don’t think the seniors have ever been in that position. The message was that today could be one of your most memorable games in basketball.”

The Tigers will host Alabama on Thursday at 7 p.m. in the home regular season finale and will take on Tennessee in Knoxville next Sunday to determine final seeding for the SEC Tournament.

Sunday started with LSU in a three-way tie with Florida and Tennessee for second place in the SEC. After the Volunteers lost at No. 1 South Carolina earlier in the day, the winner of LSU vs. Florida was guaranteed to take sole possession in the spot behind the Gamecocks with one week left in the regular season. The matchup did not disappoint. The Tigers and Gators were tied nine times and the game featured 9 second half lead changes. Neither team led by more than six in the second half.

Florida had won 10 of its past 11 games with its only loss in that stretch coming against South Carolina before Sunday’s game. LSU relied on a team effort in the PMAC to avenge a one-point loss to the Gators earlier in the season in Gainesville. Alexis Morris had a game-high 20 points; her fourth straight game with 20+. Autumn Newby and Faustine Aifuwa both scored in double figures, providing an important post presence as the LSU guards had an off-shooting night.

With LSU leading in the final minute, Aifuwa blocked two shots on the same possession to help the Tigers hold on for their fifth ranked win of the season.

Neither team shot the ball well as both LSU and Florida shot below 37-percent. LSU scored 16 points off of turnovers to Florida’s 2 and the Tigers made twice as many free throws than the Gators.

The Tigers jumped out to a 6-2 lead with baskets from Morris, Jailin Cherry and Newby. The Gators hit layups, pushing the ball in transition and tying the game at 8 into the first media timeout. Morris rattled a shot in from the left wing, giving LSU five straight points to take a 13-8 lead and the Aifuwa scored a second-chance basket to force a Florida timeout. Merritt hit an open three from the top of the key to end LSU’s run. Ryann Payne hit a pair of free throws to give LSU a 17-12 lead at the end of one.

At the 6:43 mark in the second quarter Nina Rickards nailed a Florida three to tie the game at 19. Morris hit a jumper to put the Tigers in front and prevent Florida from taking its first lead. With LSU going without a bucket for three and a half minutes, the Gators took their first lead at the 1:10 mark of the quarter to go into the half with a 26-25 lead.

The teams traded baskets to start the third quarter and the teams were tied at 36 with 4 minutes left in the quarter. Hannah Gusters made two big buckets in the post to put LSU up 40-38, but Florida tied it back up the next possession. Neither team led by more than three points in the quarter until Gusters put the Tigers up 44-40 in the final second of the quarter, going into the final quarter.

Newby broke the tie, cleaning up a Khayla Pointer miss and converting an and-one with five minutes left on the clock. Aifuwa gave LSU a 55-50 lead on LSU’s next possession, the largest lead by either team in a tightly contested second half. Florida refused to go away, and brought it within two with one minute remaining. Morris was fouled going up for a shot with 38 seconds remaining, but she hit just one of two, unable to stretch it to a multi-possession lead.

Aifuwa blocked a shot attempt by Florida’s Smith in the paint, rejecting it out of bounds with 32 seconds left. She blocked a second shot and Cherry secured the rebound, got the ball to Morris who was fouled by Florida. She hit both to give LSU a 61-56 lead, but Florida’sFaith Dut hit her first career three with 14 seconds left. Morris was sent to the free throw line once again and with ice in her veins sunk them both.

Florida’s Kiara Smith was fouled going to the rim on the ensuing possession, but went down with an apparent injury and Alberte Rimdal came in and made both attempts to bring the game back within two points. With 9 seconds left, Morris went back to the charity stripe, making one of two to go up, 64-61. Florida took a timeout and advanced the ball up the floor, but their attempt to tie the game fell short. Morris got the rebound, was fouled and secured LSU victory once and for all, 66-61.