Tigers Open 2022 Season vs. Maine Friday Night at 'The Box' 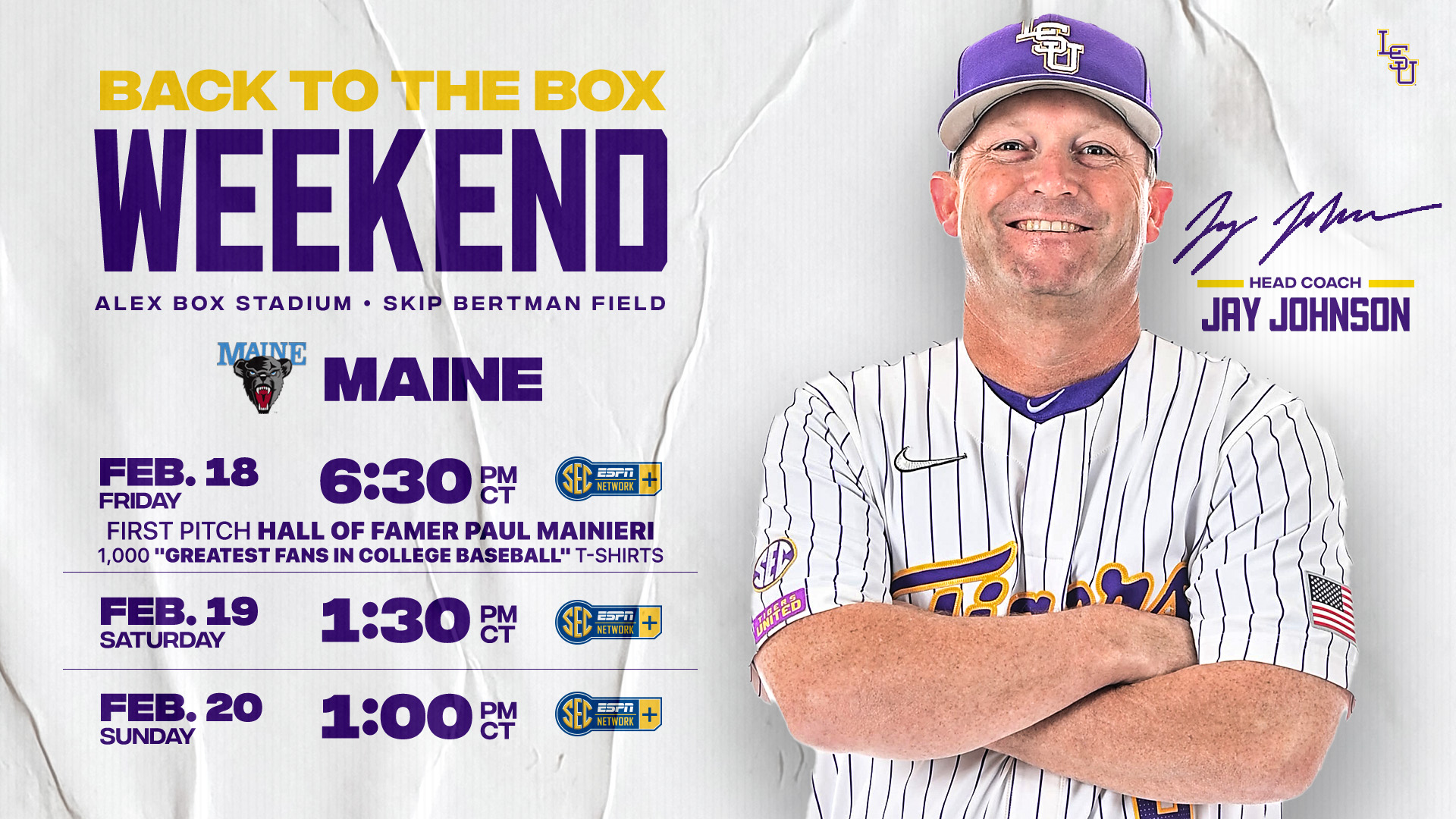 SPECIAL EVENTS
• Paul Mainieri, who retired as LSU’s head coach at the end of the 2021 season, will throw out the ceremonial first pitch before Friday’s game … Mainieri led LSU to the 2009 national championship, five College World Series appearances, nine NCAA Regional titles, four SEC regular-season titles and six SEC Tournament championships during his 15 years with the Tigers … he coached for 39 seasons overall at St. Thomas, Air Force, Notre Dame and LSU, and he is one of only five coaches in NCAA Division I Baseball history to win 1,500 career games and a national championship.
• First 1,000 fans on Friday night will receive “Greatest Fans in College Sports” T-shirts

SERIES RECORD VS. MAINE
LSU leads the all-time series versus Maine, 6-1, and the teams are meeting this weekend for the first time since 1995, when the Tigers swept a three-game series in Alex Box Stadium … LSU also won two of three games over the Black Bears in 1992 at “The Box” … the first meeting between the schools occurred at the 1986 College World Series, when LSU posted its first-ever win in a CWS game, defeating Maine, 8-4, on June 1, 1986 … LSU has a 12-3 all-time record against current members of the America East Conference – the Tigers are 6-1 vs. Maine, 2-2 vs. Stony Brook, 3-0 vs. UMass Lowell and 1-0 vs. Binghamton.

QUOTING COACH JAY JOHNSON
“We are extremely excited about this weekend and can’t wait to play in front of our great fans in a stadium with no capacity restrictions. Our team is starting to take shape; there are just so many guys that can make a contribution, and it’s our job to put them in a spot for them to be successful. I like the versatility of our team – we’re a strong team, but we also have a lot of athleticism. We can mix and match our players on a given day to give us the best chance to win. I’m looking for our guys to have a good mindset and execute their jobs the way they’ve been trained. The most important thing for the opening weekend is for the players to control their heartbeats; they’ve worked extremely hard to get to this point, so we just want to default to our training and have a good heartbeat about what we’re doing.”

ABOUT THE TIGERS
• Coach Jay Johnson enters his first season at the helm of the LSU program this weekend versus Maine … Johnson has worked nine seasons as a collegiate head coach, including one season (2005) at Point Loma Nazarene, two seasons (2014-15) at Nevada and six seasons (2016-21) at Arizona … he directed Arizona to College World Series appearances in 2016 and in 2021, and the Wildcats finished as the national runners-up in 2016 to Coastal Carolina … Johnson’s 2021 Arizona club also won the Pac-12 conference title, and he was named the league’s coach of the year.
• LSU posted a 38-25 overall mark last season, 13-17 in the Southeastern Conference … the Tigers won the 2021 NCAA Eugene (Ore.) Regional – after dropping its first game of the regional to Gonzaga, LSU rebounded to defeat Central Connecticut State, Gonzaga and Oregon (twice) to win the regional … the Tigers advanced to the NCAA Knoxville Super Regional, where LSU was eliminated in two games by Tennessee.
• The Tigers, ranked as high as No. 3 by Collegiate Baseball in the 2022 preseason polls, return nine position players with starting experience and 10 pitchers who recorded innings last season. LSU was predicted to finish fourth in the SEC Western Division in the annual poll produced by the league coaches.
• Eleven LSU players appear in the 2022 D1 Baseball Preseason Position Rankings: Dylan Crews is rated No. 1 among outfielders, Tre’ Morgan is the No. 1 first baseman, Jacob Berry is the No. 1 third baseman, and Cade Doughty is the No. 4 second baseman. Other Tigers in the position rankings are Gavin Dugas (No. 14 outfielder), Jordan Thompson (No. 23 shortstop), Tyler McManus (No. 29 catcher), Eric Reyzelman (No. 42 relief pitcher), Paul Gervase (No. 51 relief pitcher), Javen Coleman (No. 98 starting pitcher) and Devin Fontenot (No. 102 starting pitcher).
• LSU leads the nation with three players on the 2022 Golden Spikes Award Preseason Watch List released by USA Baseball on Tuesday. The announcement of the 55-player watch list begins the process of identifying the top amateur baseball player in the country for the 2022 season. The LSU players on the Golden Spikes Award Watch list are sophomore outfielder Dylan Crews, sophomore first baseman Tre’ Morgan and sophomore infielder Jacob Berry. LSU is the only school with three players on the list and is followed by Arizona State, Arkansas, California, Florida, Ole Miss, Texas and Vanderbilt, all of which have two representatives.
• LSU has won 20 consecutive season-opening games; the Tigers’ last loss in a season opener occurred on February 10, 2001, when LSU dropped a 9-8 decision to Kansas State in the original Alex Box Stadium.

ABOUT THE BLACK BEARS
• Maine posted a 22-22 overall record in 2021, including a 16-17 mark in the America East Conference … Maine was No. 2 in the conference in batting average, as the Black Bears hit .270 with 36 homers and 28 steals in 39 attempts … Maine was also No. 2 in the conference in team ERA (4.76), and the Black Bears’ staff recorded 368 strikeouts in 353.1 innings.
• Maine head coach Nick Derba enters his fifth season with the Black Bears, having recorded an 83-131 overall mark, 47-53 in the America East Conference.
• Maine’s leading returning hitter is senior catcher Ryan Turenne, who batted .308 last season with four doubles, five homers and 19 RBI … other top returning hitters include senior outfielder Scout Knotts (.295, eight doubles, three triples, four homers, 21 RBI) and graduate infielder Joe Bramanti (.293, seven doubles, six homers, 28 RBI).