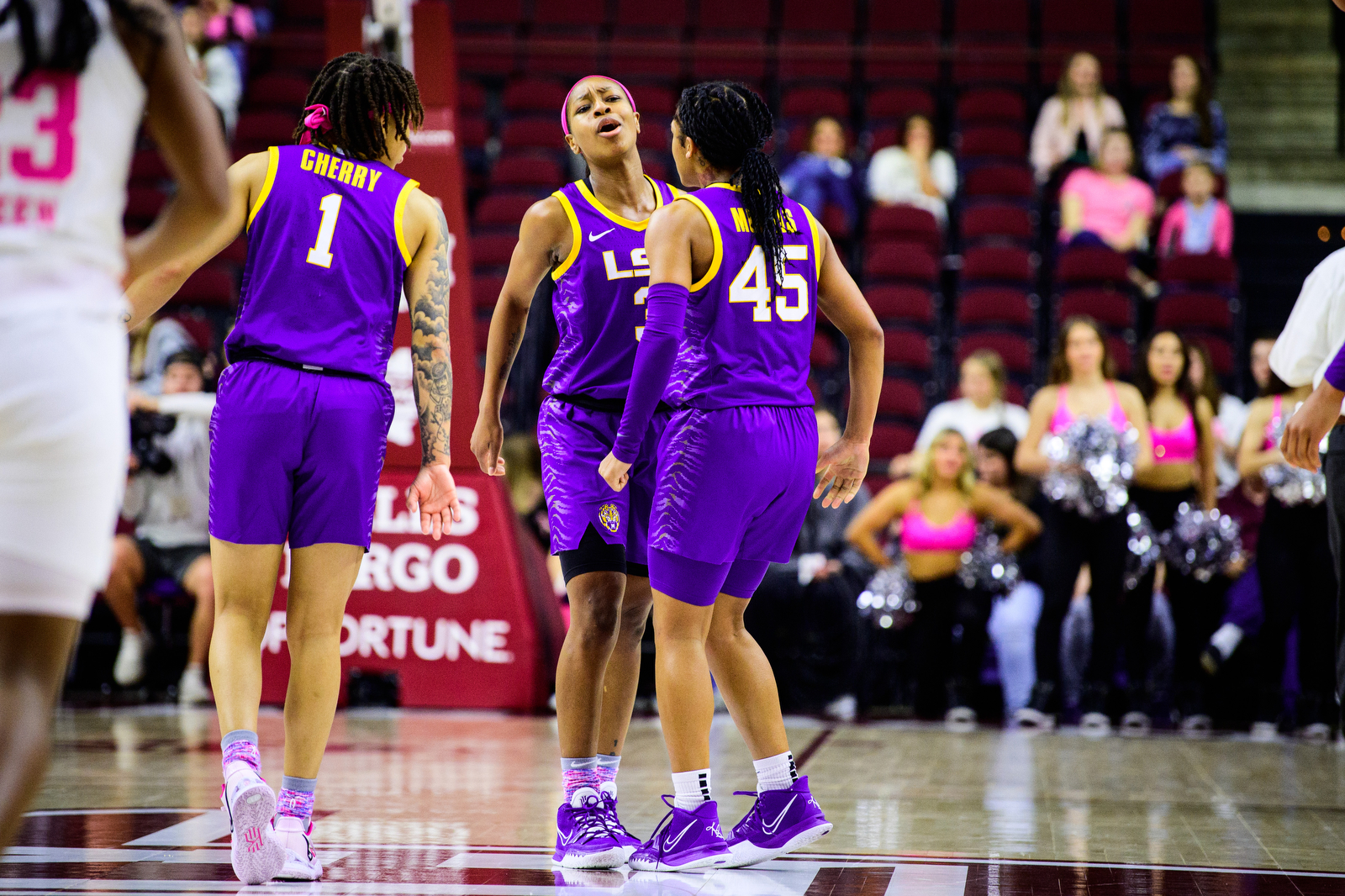 “What they did, they did on sheer will to win, sheer talent and just making clutch plays,” said LSU Head Coach Kim Mulkey. “It wasn’t anything I drew up. It wasn’t any magical thing said in the timeout. You have to win some of those like that sometimes.”

After trailing by two going into the final quarter LSU closed the game on a 17-3 run over the final 4:53 to leave Starkville with a win for the first time since 2015. The Tigers made clutch shots down the stretch and made late defensive stops allowing just one made basket in MSU’s final 11 attempts, which was a three in the final seconds of the game once the outcome had already been decided. LSU has won 10 conference games for the first time since 2014-15.

“I don’t know how we won this game other than their will to win and their will to not be afraid to take that shot,” said Coach Mulkey. “These seniors lost many games last year that they could have won; they were close games. It’s rewarding for me for them to now win those close games that they lost last year.”

LSU’s guard trio of Alexis Morris, Khayla Pointer and Jailin Cherry all scored in double figures. Morris had 23 (15 in the fourth quarter), Pointer had 18 and Cherry had 10. Faustine Aifuwa and Autumn Newby both had 12 rebounds and Cherry had eight rebounds.

Anastasia Hayes had 17 points to lead the Bulldogs and she added five assists. Charlotte Kohl had 11 rebounds and 8 points.

The Tigers will be back home on Sunday to host No. 17 Florida on SEC Network at 3 p.m. CT in a critical conference matchup with three games remaining in the regular season. After Tennessee lost at Alabama tonight, LSU is in a three-way tie for second place in the SEC with the Volunteers and the Gators.

“None of them have been in this position,” Coach Mulkey said. “You’re tied for second in the league. You’ve got a chance to host first and second round games potentially. You’ve won 22 basketball games.”

Three early turnovers from LSU allowed the Bulldogs to jump out to a 7-4 lead, but Pointer tied the game with a three and Newby gave LSU a 9-7 lead after grabbing an offensive rebound. After MSU took the lead back, Pointer hit her second three to give LSU a 12-10 advantage. The Bulldogs scored the next four before Morris hit a three, kickstarting an LSU run to go up 19-14 into the media timeout at 2:22 left in the opening quarter. The Tigers used a productive first quarter in which they shot 52.6-percent from the field to lead 23-16.

Cherry made her first bucket to get LSU on the board first in the second quarter to give the Tigers a nine point lead. She made another basket a couple possessions later to give LSU a double-digit, 27-17, lead. Morris made it 13 when she hit her second three of the game. The Bulldogs clawed back though and reduced LSU’s lead to four at the 3:05 mark of the quarter after a 9-0 MSU run. Ryann Payne hit a bucket to end the Bulldog’s run, but it did not stop the momentum MSU as the Bulldogs hit a three the next possession to make it a three point game. A last second layup by MSU made it 34-31 as LSU took a three-point advantage into the half. After coming out hot in the first quarter LSU’s shooting cooled to 33.3-percent in the second quarter, allowing MSU back in the ballgame.

The Bulldogs took the lead, 37-36, with 7:02 left in the third quarter. The teams went into the media timeout at the 4:09 mark tied at 42 as Payne hit multiple contested shots to keep the game tied. Pointer hit her third three and then two free throws to give LSU a 7-0 run, taking a 47-42 lead. The Bulldogs scored the next seven to take the lead back and go into the 4th with a 49-47 advantage over the Tigers.

After going scoreless in the third, Morris converted a three-point play to begin the fourth to give LSU back the lead. With the teams going back and forth Morris hit a runner down the lane to tie the game at 56 with 4:50 remaining. She hit another runner at the 4:13 mark to give the Tigers the lead and Cherry followed that up with a corner jumper. Morris gave LSU an 8-0 run after hitting a reverse layup to go up 62-56 as LSU was holding MSU scoreless for over six minutes, clamping down and finishing strong in Starkville.