Kim Mulkey On Naismith Coach of the Year Watchlist 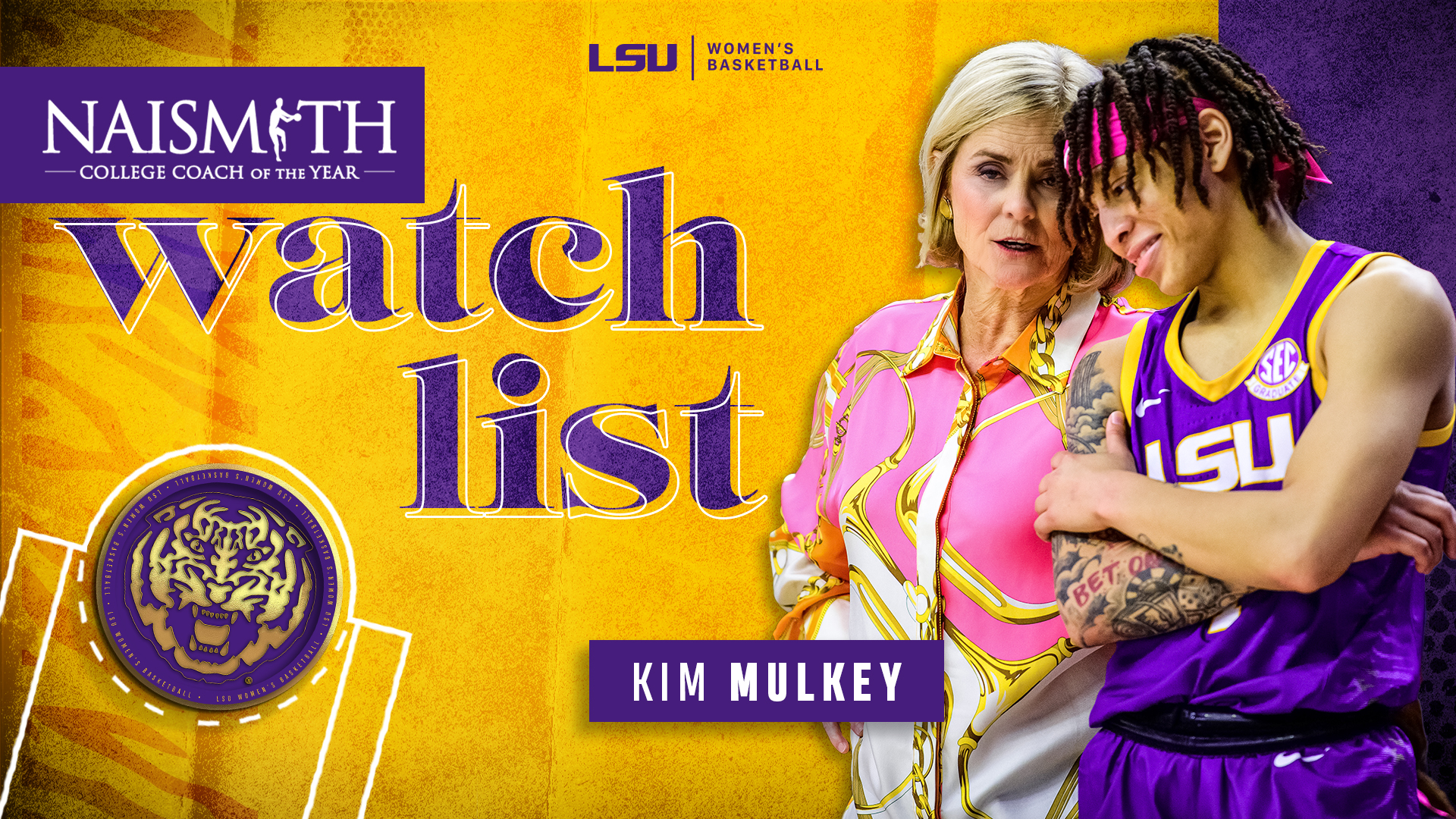 BATON ROUGE – LSU Head Coach Kim Mulkey was named as one of 15 coaches on the watchlist for the Naismith National Coach of the Year as in her first year at LSU she has led the Tigers to their best regular season in 15 years.

The Hammond, Louisiana native is a member of the Women’s Basketball Hall of Fame and the Naismith Memorial Basketball Hall of Fame and she was hired to come home to Louisiana in April, taking over a team that won nine games last year. With four games remaining in the regular season LSU is 21-4 (9-3 SEC). In her 22nd season as a head coach, Mulkey has won at least 20 games every year and in her first year at LSU she has led the Tigers to their most regular season victories since the 2007-08 season.

Coach Mulkey has reinvigorated the LSU Women’s Basketball program and has the Tigers in a position where they control their own destiny. After being picked in the preseason to finish No. 8 in the SEC, LSU has the opportunity to finish as high as No. 2 in the nation’s most competitive conference. The Tigers are also in position to earn one of the Top-16 seeds in the NCAA Tournament which would allow them to host first and second round games inside the PMAC.

The roster Coach Mulkey inherited featured key senior players who have been crucial to the success she has had in her first season at LSU. Khayla Pointer is on multiple national player of the year watchlists and will ultimately go down as one of the greatest to ever play at LSU. She is the only player in LSU history to have 1,500 points, 500 assists and 500 rebounds in her career. Faustine Aifuwa has been another critical senior, playing big minutes in the post. In SEC play, she leads the conference in shooting percentage. Jailin Cherry is on pace to set new career-highs for points per game, rebounds per game and assists per game.

Key transfers have also played a key role in Coach Mulkey’s first season success at LSU. Alexis Morris came to LSU from Texas A&M and has electrified LSU’s offense, providing an additional spark along with Pointer. Morris and Pointer are the only teammates in the SEC that both rank in the Top-10 in the conference in scoring. Autumn Newby played previously at Vanderbilt but transferred to LSU for her final season of eligibility. She has proven to be a relentless rebounder on both ends of the court as one of the Top-10 rebounders in the conference.

The Tigers have played as one of the best teams in the SEC. LSU and South Carolina, the unanimous No. 1 team in the country who LSU took to the brink, are the only two teams to rank in the top four of the conference in scoring, field goal percentage, field goal percentage defense, and rebounding margin. After picking up the first win over a ranked team in the Coach Mulkey era against No. 14 Iowa State on December 2, LSU has been featured inside the AP Poll for 11 straight weeks. The Tigers have a total of four wins over ranked opponents.

All Coach Mulkey does is win and earlier this season she became the fast DI head coach in men’s or women’s history to reach 650 wins, needing only 758 games to do so. The most successful player-turned-coach in men’s or women’s history, Coach Mulkey is the only person to ever win NCAA National Championships as a player, assistant coach and head coach. She is an eight-time National Coach of the Year.

Coach Mulkey has also brought fresh energy to the fan base as LSU ranks No. 3 in the SEC in attendance. Playing with hard-nosed passion on both ends of the court, the Tigers have electrified a fan base that saw LSU go to five consecutive Final Fours from 2004-2008.