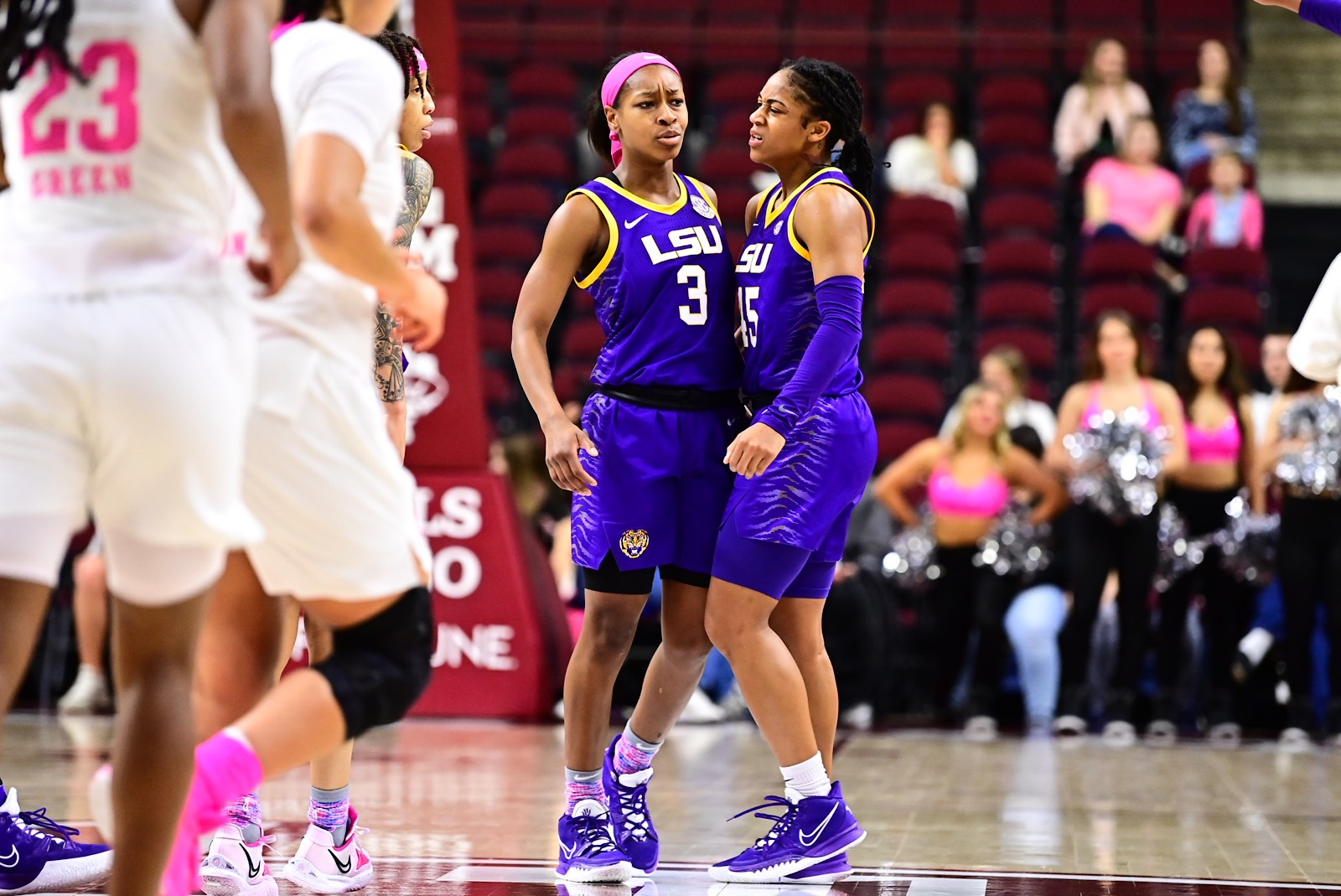 COLLEGE STATION, Texas – No. 14 LSU trailed by six at the half, but big second half performances from Alexis Morris and Khayla Pointer propelled the Tigers to a 74-58 win over Texas A&M Sunday in Reed Arena.

“It was a game that I thought we even controlled it when we were behind at half,” said LSU Coach Kim Mulkey. “I just felt like we were in control of the game for whatever reason.”

Morris and Pointer both had 16 in the second half and they both finished with 25 points. Autumn Newby had 13 rebounds and added 7 points. Faustine Aifuwa was big in the paint with four blocks. Jailin Cherry added nine points.

Texas A&M was led in scoring by Kayla Wells, who finished with 23 points. Aaliyah Patty finished with a team-high 10 rebounds. Jordan Nixon led the Aggies in assists with five for the afternoon.

LSU won its 21st game, marking the most wins any player on the current roster has had in their LSU careers. The Tigers have four games remaining and will be at Mississippi State on Thursday night.

“The story that needs to be told is 21,” Coach Mulkey said. “This is the first time that these seniors have won 21 ballgames in their career at LSU. We’re not a team that was supposed to do anything.”

Both teams started slow offensively and Pointer was the only player to score in the first three minutes to give LSU a 2-0 lead. Cherry and Morris both hit quick shots to give the Tigers a 6-0 lead. TAMU got on the board with a three after starting the game 0-7 from the field. Morris responded with a three, but the Aggies worked to bring it back within one possession. Morris finished with 9 points in the opening quarter, Mackenzie Green banked in a three at the buzzer to tie the game at 16.

TAMU took its first lead to start the second quarter, but Pointer made a layup and a three to take back the lead for LSU. TAMU went on an 8-0 run with Wells hitting back-to-back threes to give the Aggies a 26-21 lead. LSU went cold from the field, missing 11 consecutive shots before Ryann Payne made a baseline jumper to make it a 33-27 which is where the score stayed going into the break. LSU grabbed 10 offensive rebounds in the first half, but only converted those into one second chance point in the opening half.

TAMU called a quick timeout less than three minutes into the third quarter with LSU on a 7-2 run that brought the Tigers within one after a Pointer trey, giving her 14 on the afternoon. Pointer tied the game at 37 with a layup on a fast break after a steal by Faustine Aifuwa. The Aggies didn’t allow LSU to jump in front until the 3:25 mark when Newby sank two free throws to give LSU a 43-42 lead and then Morris recorded her first points since the first quarter to put LSU up three. LSU went up 49-44 following a big block by Aifuwa that led to points by Newby on the other end. Hoppie responded with a three for the Aggies. With under a minute left in the quarter, Morris pulled up from three and made it. The teams traded baskets in the final 15 seconds of the quarter and LSU took a 54-49 lead into the fourth.

Morris scored LSU’s first seven points of the fourth quarter as LSU extended its lead to 10 points. Pointer created a bucket off the dribble with the shot clock winding down to put the Tigers up 63-51 with 6:26 left and TAMU took a timeout. The Aggies looked to mount a run, but Morris ended it before it picked up steam as she made a shot after rebounding her own miss to go up, 67-68. LSU held onto the lead and prevented TAMU from making any runs, forcing turnovers down the stretch and extending the lead to take down the Aggies for the second time this season.