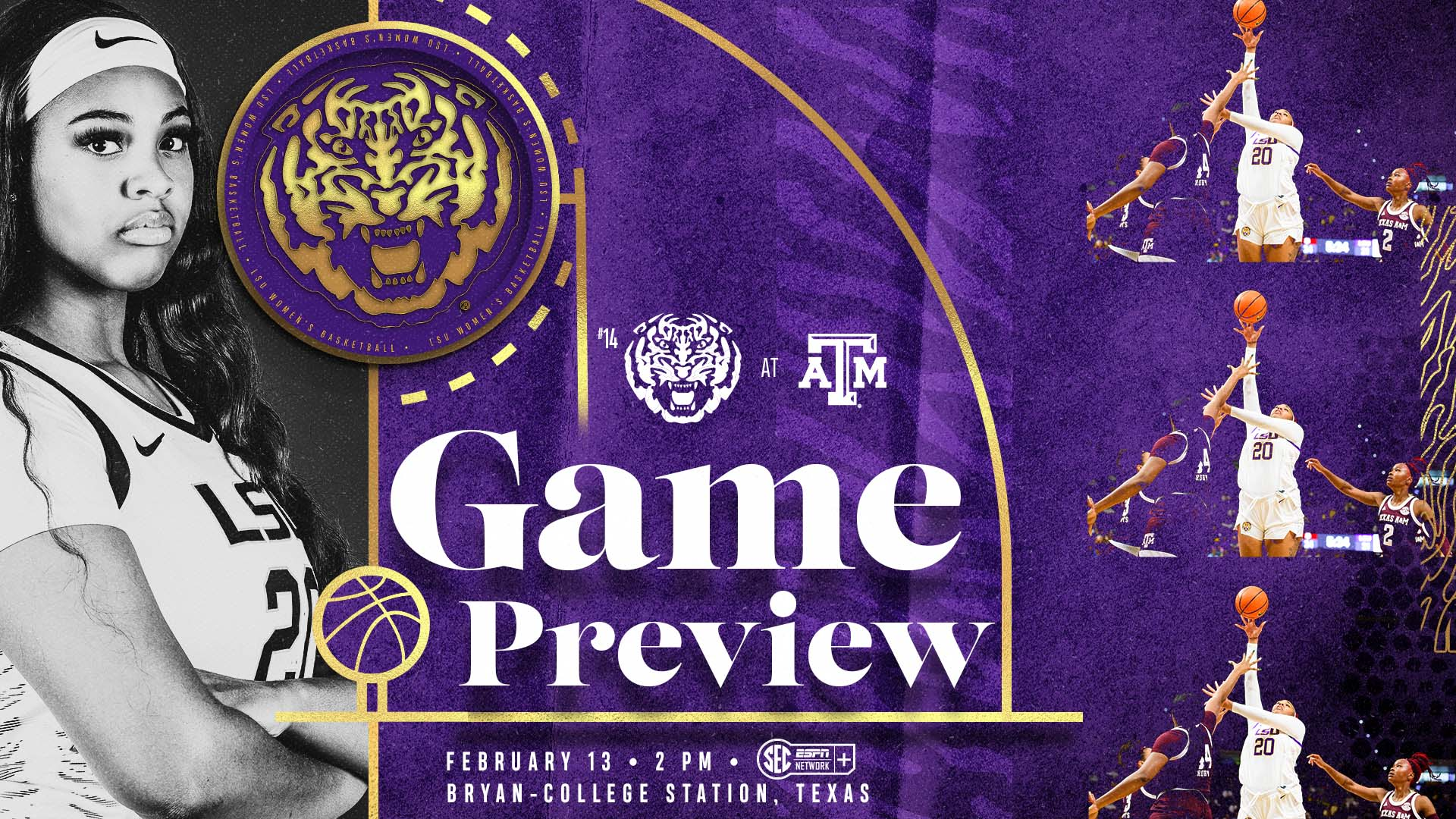 All five games are important for LSU down the stretch as the Tigers sit tied for third in the SEC heading into Sunday’s matchup. LSU controls its own destiny in the conference with the opportunity to finish as high as No. 2 in the SEC after being picked No. 8 in the preseason. The Tigers are also playing with the chance to earn one of the Top-16 seeds in the NCAA Tournament which would allow them to host the first and second rounds inside the PMAC.

“There are many (teams) left in our schedule that are fighting for byes in the SEC tournament and hosting first and second rounds,” said LSU Head Coach Kim Mulkey.

Thursday’s game will be streamed on the SEC Network + with Will Johnson and Tap Bentz. Fans can also listen to the game on the LSU Sports Radio Network, 107.3 FM in Baton Rouge, with Patrick Wright and Shaeeta Williams.

With Coach Mulkey in her first season at LSU, the Tigers have gone from winning nine games a year ago to playing as one of the elite teams in the conference. LSU’s triple-threat in the backcourt of Khayla Pointer, Alexis Morris and Jailin Cherry has played as one of the nation’s top trio of guards. Pointer is playing as one of the premier players in the NCAA and is on numerous National Player of the Year Watchlists. Morris, who played at Texas A&M last season, has been a critical addition this season for the Tigers who has provided a spark scoring the ball. Cherry is on pace to set new career marks for points per game, rebounds per game and assists per game.

In LSU’s win on Thursday over No. 17 Georgia, Pointer (21), Morris (26) and Cherry (18) combined for 65 of LSU’s 73 points. LSU’s backcourt scored from all three levels of the court, but the Tigers are looking to get more production from their post players as well. Faustine Aifuwa was in foul trouble much of the game against Georgia and although Autumn Newby only scored three points, she was important on the boards with nine rebounds. LSU’s post players combined for only nine shots and made only three.

“We have to get more production from our posts,” Coach Mulkey said following the Georgia game. “We have to have confidence in ourselves to throw it in there and I don’t know we did much of that tonight. It might have been because we knew (Jenna) Staiti was back and she’s tall and altering shots. It could have been foul trouble with Faustine.”

LSU has shown the ability to play at a high level in the post. In Monday’s win over Ole Miss, Aifuwa was dominant in the paint with 20 points and 14 rebounds.

LSU and Texas A&M matched up earlier in the season on January 2 and Morris exploded for a career-high 30 points (23 in the second half) against her former team. The Tigers beat the Aggies by nine points.

“They haven’t forgetting that we beat them here (in Baton Rouge),” Coach Mulkey said. “And really they’re trying to improve their resume. They’re trying to get some quality wins to maybe be on that bubble.”

Texas A&M will enter Sunday’s game on a three-game winning streak, looking to make a late season push to earn an NCAA Tournament berth. The Aggies are on the bubble to make the postseason tournament after beginning conference play 1-7. But in Head Coach Gary Blair’s final season the Aggies, who won the SEC regular season title last season, are refusing to go quietly.

Texas A&M shoots the three ball as well as anybody in the conference The Aggies make 39-percent of their attempts from long range and they feature four players who make over 38-percent of their three pointers. Kayla Wells is No. 6 in the SEC scoring 16.6 points per game. Jordan Nixon, Destiny Pitts and Qadasha Hoppie all hover around 11 points per game.

Unless the two teams meet in the postseason, this will be the final time Coach Mulkey and Texas A&M Head Coach Gary Blair go at it. Their history goes all the way back to when Blair was an assistant coach at Louisiana Tech when Mulkey starred on the court for the Lady Techsters. After her playing career at Tech was over and Blair left for Stephen F. Austin, Mulkey began her coaching career and took over his role as an assistant in Ruston. In 2000 Mulkey became the head coach at Baylor and Blair became the Texas A&M coach in 2003 and they battled against each other head-to-head in the Big 12 every season until Texas A&M joined the SEC. Mulkey’s first season at LSU is Blair’s final season as a coach, announcing his intended retirement prior to the season. Mulkey owns a 20-5 record over Blair as a head coach.