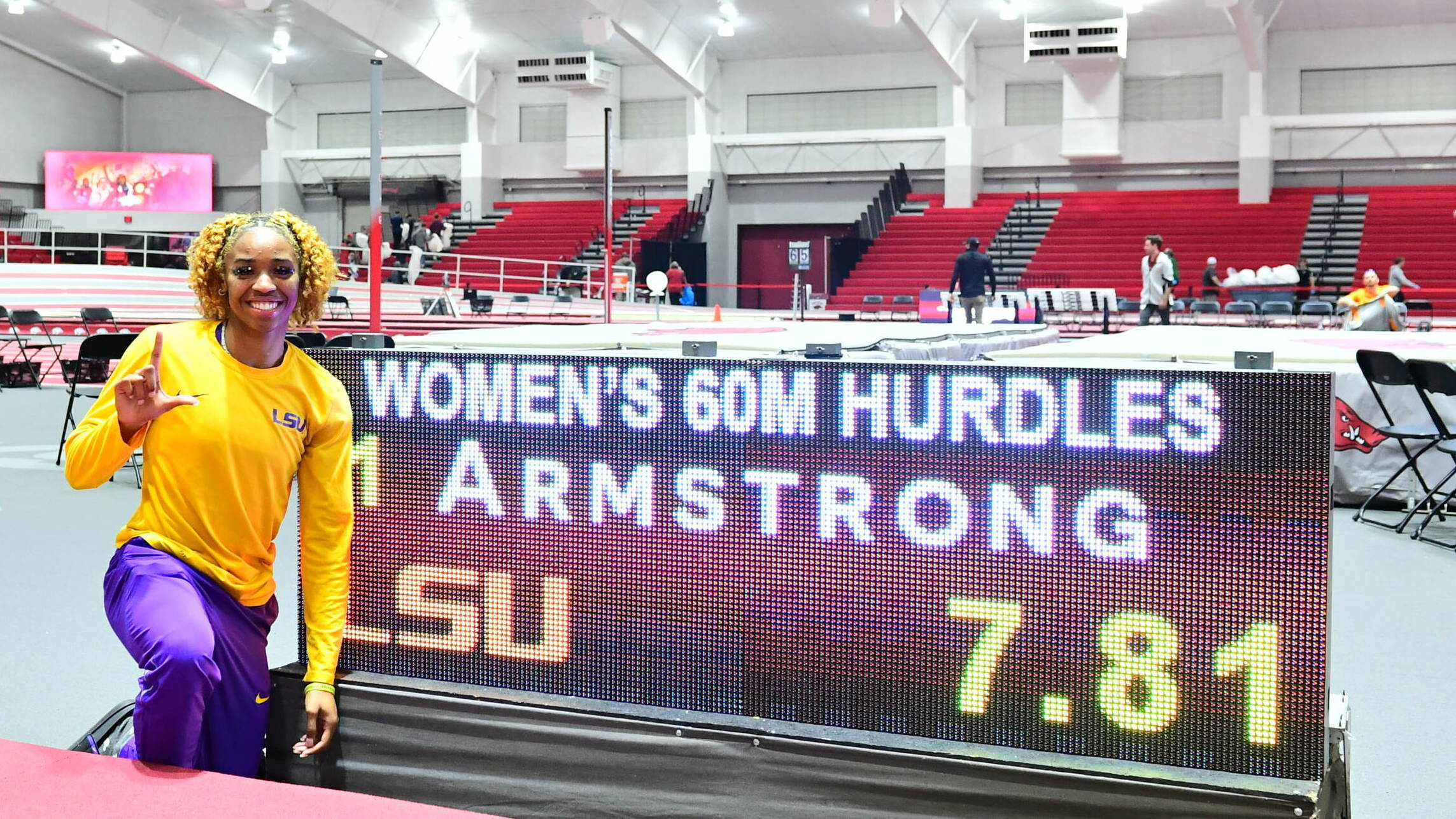 Fayetteville, Ark. – LSU hurdler Alia Armstrong became the No. 2 performer in collegiate history on Friday night at the Randal Tyson Track Center. Armstrong ran a personal best time of 7.81 seconds in the 60 meter hurdles to claim the No. 2 spot on the all-time collegiate list.

Alia Armstrong entered the meet tied as the third fastest collegiate performer in the 60 meter hurdles alongside former teammate Tonea Marshall and Florida hurdler Grace Stark. Armstrong and Stark, who are two of the five fastest hurdlers in collegiate history, were competing against each other for the first time this season.

She Did That ‼️

The two both won the preliminary heats and qualified to the finals with lane assignments right next to each other – lane 4 & 5. Armstrong used a phenomenal start out the blocks and never relinquished the lead as she ran a near perfect race on her way to a personal best time of 7.81 seconds. It moved her to a perfect 4-0 this season in the hurdles and it marked her second straight PR in the event following up her 7.86 two weeks ago at this same track.

“I knew this was going to a big race, but I sat down and envisioned myself running a really good race,” Armstrong said after the race. “I’ve put my all into practice and I give my all every day. This is kind of what I expect out of myself, and I’m glad it happened.

“This race boosted my confidence, but I know there is still work left to do. There are a lot of other women out there working just as hard as me, so I have to keep pushing.”

To put the time of 7.81 in perspective, that mark moves Armstrong into the No. 9 slot on the all-time U.S. list in the event alongside Jackie Joyner-Kersee. It’s also a time that ranks as the LSU school record, the 2022 NCAA lead, matches the 2022 world lead, and it broke Gail Devers meet record at the Tyson Invitational. It moved her up to sole possession of No. 2 spot on the all-time collegiate performer list behind only Clemson’s Brianna Rollins-McNeal (7.78/2013).

Sprinter Favour Ofili was LSU’s only other winner on the night as she stormed to victory in the 60 meter dash with a readout of 7.25 seconds for the win. Amber Anning ran a season best of 52.07 in the 400 meter dash to place second overall and as the top collegiate behind Olympian Shamier Little. Anning’s time of 52.07 checks in as the ninth fastest this season in the nation.

Morgan Smalls collected a season best leap of 20’ 9” (6.32 meters) on her sixth and final attempt in the long jump to place second in the event; that mark ranks No. 12 in the NCAA.

Eric Edwards Jr. and Leah Phillips both registered podium finishes in the hurdles as well. Edwards Jr. used a season best of 7.60, which moved him up to the No. 3 spot in the NCAA this year, to take silver, and Phillips finished third in the finals of the 60 meter hurdles with a time of 8.07 seconds. In the prelims, Phillips ran a personal best of 8.05 seconds, and that mark is the ninth fastest in college this season.

LSU had three other finalists in the 60 meter dash. Tionna Beard-Brown dashed her way to a fifth place showing in a time of 7.38 seconds in the women’s final, and the men’s duo of Kenroy Higgins II (6.71) and Da’Marcus Fleming (6.78) took fifth and sixth, respectively.