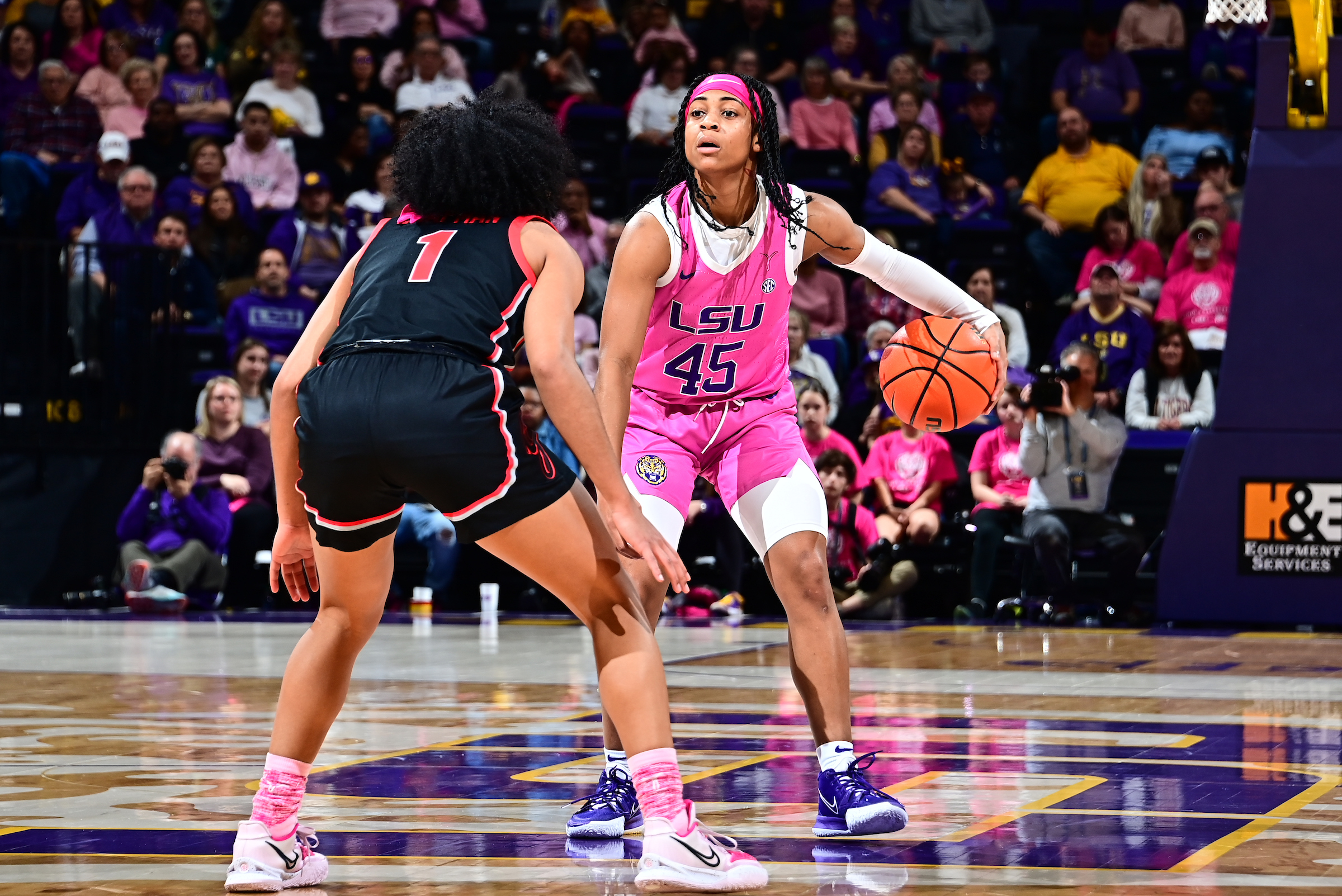 In her first season at LSU and her 22nd season as a head coach, Kim Mulkey has won at least 20 games every season throughout her entire career.

The Tigers led by as many as 20 points in the third quarter, but the Bulldogs clawed back, tying the game at 62 with 2:25 left in the game. LSU held on to win though as Alexis Morris was a perfect 6-for-6 from the free throw line in the final minute of the game.

Morris led the Tigers with 26 points and had six assists. Khayla Pointer finished with 21 points and Jailin Cherry scored 18 as LSU’s three-headed backcourt had 65 points for the Tigers. Autumn Newby led LSU with 9 rebounds.

“They are never satisfied with what they do, and they always find something they could do better,” Coach Mulkey said of her guards. “It’s always a joy to coach them.”

LSU shut down Georgia’s starters. Jenna Staiti and Que Morrison, Georgia’s two leading scorers for the season, were held to 8 and 9 points, respectively, as none of the Bulldog starters scored in double figures. It was Georgia’s bench who scored 34 points and led its comeback attempt in the second half. Coming off the bench Reigan Richardon had a team-high 17 points and was the only Bulldog to score double-digits.

“I thought we did a very good job against their starters,” Coach Mulkey said. “If you look at the production from the big girl and the production of ours, we held them in check. We basically almost got beat by their bench.”

LSU has five games remaining in the season and is in a position to control its own destiny with an opportunity to finish as high as No. 2 in the SEC and to be a Top-16 seed in the NCAA Tournament and host the first and second rounds. The Tigers will travel to Bryan-College Station to face Texas A&M Sunday at 2 p.m. CT. The game will air on the SEC Network Plus.

LSU made its first three shots of the game, including two by Cherry, to jump out to a 6-2 lead within the first two minutes. Georgia went on to bring the score within one, but LSU did not let the Bulldogs take a lead as Cherry hit her third shot of the game to give the Tigers a 10-7 lead at the media timeout. Morris made her first basket out of the timeout to give the Tigers a five point lead. Pointer made the first of two free-throws, but Awa Trasi grabbed the missed second free-throw and found Morris for a three to put LSU up nine. With 13 second left in the quarter Morris pulled up from three to put the Tigers ahead 23-11 at the end of one.

The Tigers scored the first six points of the second quarter to build their lead to 16. LSU kept the lead in the teens for the majority of the second quarter and with Georgia threatening to bring it back to single digits, Cherry pulled up from the right elbow to put the Tigers up, 31-17. With 10 seconds remaining in the half, Cherry hit a jumper and Georgia was called for a foul trying to get through a Newby screen. Newby hit one free-throw and Cherry grabbed the rebound off the miss and Morris nailed a deep three with time winding down to give LSU a six-point possession and a 37-21 lead going into the half.

Morris finished with 13 in the opening half and Cherry had 10 for the Tigers.

Cherry made her first shot of the second half to give LSU a 18-point lead, its largest advantage of the game. Georgia was trying to gain momentum and was on a 6-2 run when Morrison was called for a technical after a personal foul, shifting the momentum back towards LSU. Morris made both technical free throws and Pointer found the bottom of the net from three on the ensuing possession to put LSU up by 20, 48-28. Georgia punched back though and by the 1:13 mark in the third the Bulldogs had cut LSU’s lead to 10. Pointer made a layup with eight seconds left in the third to give LSU a 56-45 lead.

Georgia’s Richardson made a three on the first possession of the fourth to bring the Bulldogs within eight. Cherry gave LSU a 60-50 lead after making a three with 6:15 remaining and then Faustine Aifuwa got on the board making one of two free throws, but Georgia hit back-to-back threes to make it a five point game. At 2:26 Staiti tied the game for Georgia at 62 with a layup. After Pointer made a free throw and missed the second, Aifuwa grabbed the rebound and Cherry hit a pull-up jumper to give LSU a three-point lead. Georgia brought it back to one the next possession, but Pointer kept LSU’s lead at three, sinking two free throws with 33 seconds left in the game. After a pair of Morris free throws to give LSU a 69-64 lead, Georgia’s Tineya Hilton hit a three with 9.1 seconds left to bring the Bulldogs within two. Morris got fouled and went to line and once again she made both, giving her 24 on the night. LSU ultimately held on to win by six.