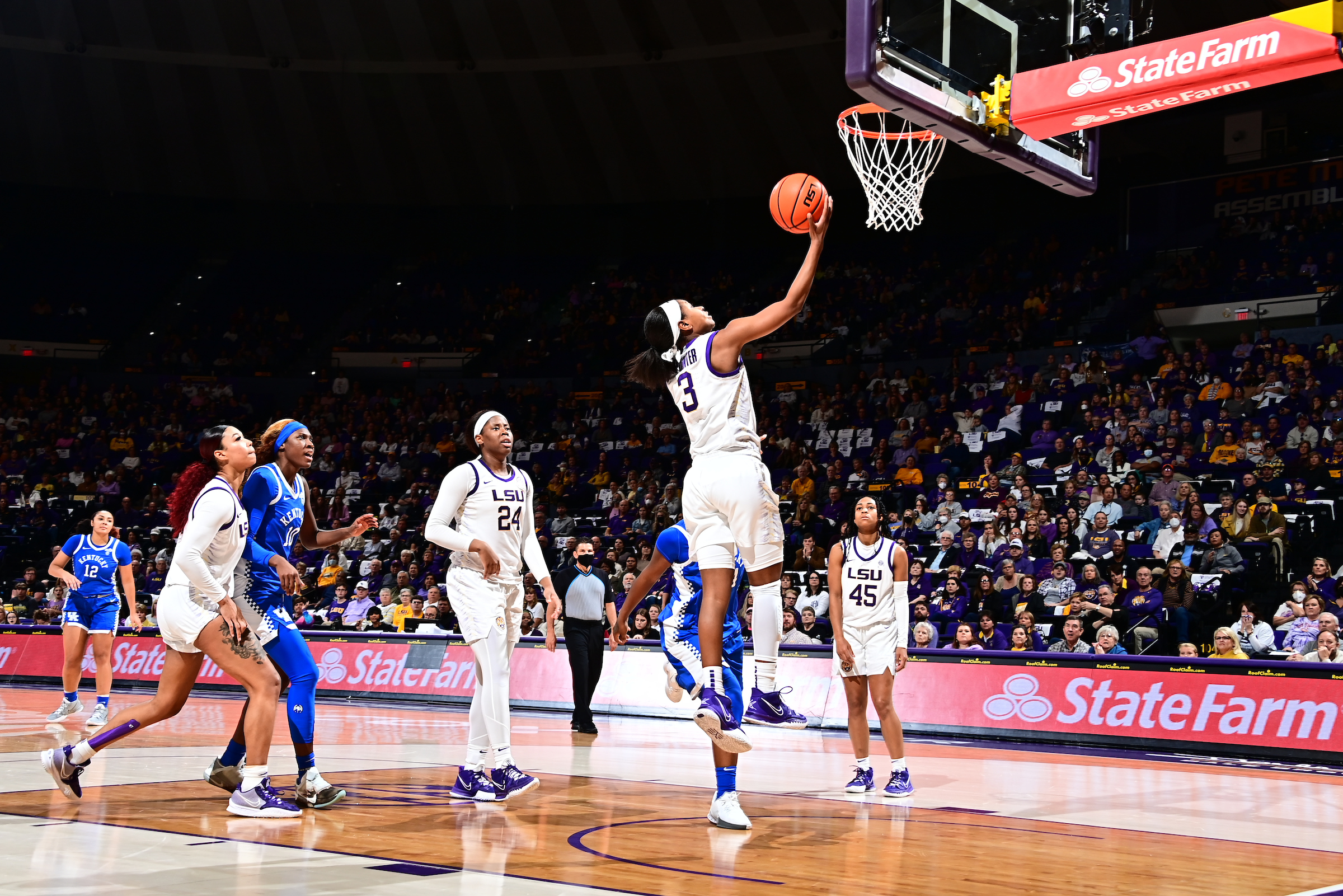 Baton Rouge, La. – Khayla Pointer put up 19 points in the fourth quarter to propel LSU to a 78-69 win over Kentucky in front of a crowd 8,734 Sunday afternoon in the PMAC.

Head Coach Kim Mulkey Recorded her 650th career win, becoming the fastest coach in men’s or women’s D-1 basketball history to reach that milestone. LSU improved to 18-4 (6-3 SEC) with the win over Kentucky after dropping its previous two games at Florida and at Arkansas.

“Timing is everything,” Mulkey said. “We went to Florida, we battled, and we came up short. We went to Arkansas, we didn’t play well. We have to give credit to Arkansas. I told them we had to come home and just keep doing what we have been doing.

“Do what we have been doing but play a little tougher. I thought the crowd was great, I think it was our second largest this year. We had a lot going on to continue a good crowd today, it was a good atmosphere.”

Pointer had all of just 9 points after three quarters of action and LSU trailed by five when the fourth quarter began. The All-SEC guard then took the game over in the final quarter draining threes, making moves on the dribble and upping the defensive pressure to end LSU’s two game skid. She recorded 19 of LSU’s 30 fourth quarter points and finished with 28 points.

While Pointer struggled to score through the first three game quarters, Alexis Morris had the hot hand. She finished the game 20 points and had 13 first half points. Faustine Aifuwa finished with 14 points an led LSU with 8 boards. Cherry also scored in double figures with 11 points and led the Tigers with 6 assists.

After turning the ball over 35 times combined at Florida and Arkansas, LSU took care of the ball against Kentucky and committed just 8 turnovers. On the flip side, the Tigers forced 19 Kentucky turnovers. Winning the turnover margin helped LSU defeat Kentucky despite the Wildcats shooting 50-percent throughout the game.

Preseason SEC Player of the Year Rhyne Howard scored 23 and had 12 rebounds for the Wildcats and Jada Walker had 21 points. Dre’una Edwards finsiehd with 10 points.

LSU made just one of its first five shots and Kentucky jumped out to an early 7-2 lead and LSU trailed, 11-7, going into the first media timeout. LSU took its first lead of the game with two minutes to go in the first quarter when Morris hit a three following an offensive rebound by Newby. Morris scored six of LSU’s final eight points of the quarter to give LSU a 23-17 lead after one.

Morris picked up in the second where she left off in the first, sinking her first shot from the right wing off a pass from Cherry to maintain a six point lead. After Kentucky sank a three, Pointer responded with her first three of the game to keep the lead at six, 28-22. Kentucky scored four straight going into the media timeout, but Aifuwa hit two free-throws coming out of the timeout and LSU switched to a zone on defense, forcing turnovers on two straight possessions. Kentucky’s Howard and Walker would tie the game at 31 minutes later though with threes on back-to-back possessions. Howard then made a layup to give Kentucky the lead back, but Cherry responded for LSU with a jumper from the right wing. Howard hit one of two free throws to close out the half and give Kentucky a 34-33 lead.

Morris, who had 13 in the first half, scored on the first possession of the second half for LSU to reclaim the lead. LSU forced a Kentucky shot clock violation and then Morris found Cherry for a corner jumper. LSU went on a 6-0 run to open the half after Cherry intercepted a pass and made the layup on the fast break, forcing an early second half timeout by Kentucky. The Wildcats scored the next five points out of the timeout though to tie the game at 39. After the teams traded buckets, Kentucky scored the last five points of the quarter to lead 53-48.

LSU started the fourth quarter on a 9-3 run, capped off by a steal by Pointer who finished on the other end following a give-and-go from Cherry to put LSU in front, 57-56, and force a Kentucky timeout. Pointer, who had 9 points the first three quarters, began to exert herself and added nine more the first five minutes of the fourth quarter. Pointer put LSU up by 5 following a steal that she finished with a fast break layup. Kentucky hit a three on the other end. Aifuwa cleaned up a Morris miss with an athletic, one-handed tip-in to give LSU a 67-63 lead. With LSU heating up and making 9-of-11 shots, Kentucky went cold and failed to make a shot for over a three minute stretch as the Tigers seized control in the final quarter.