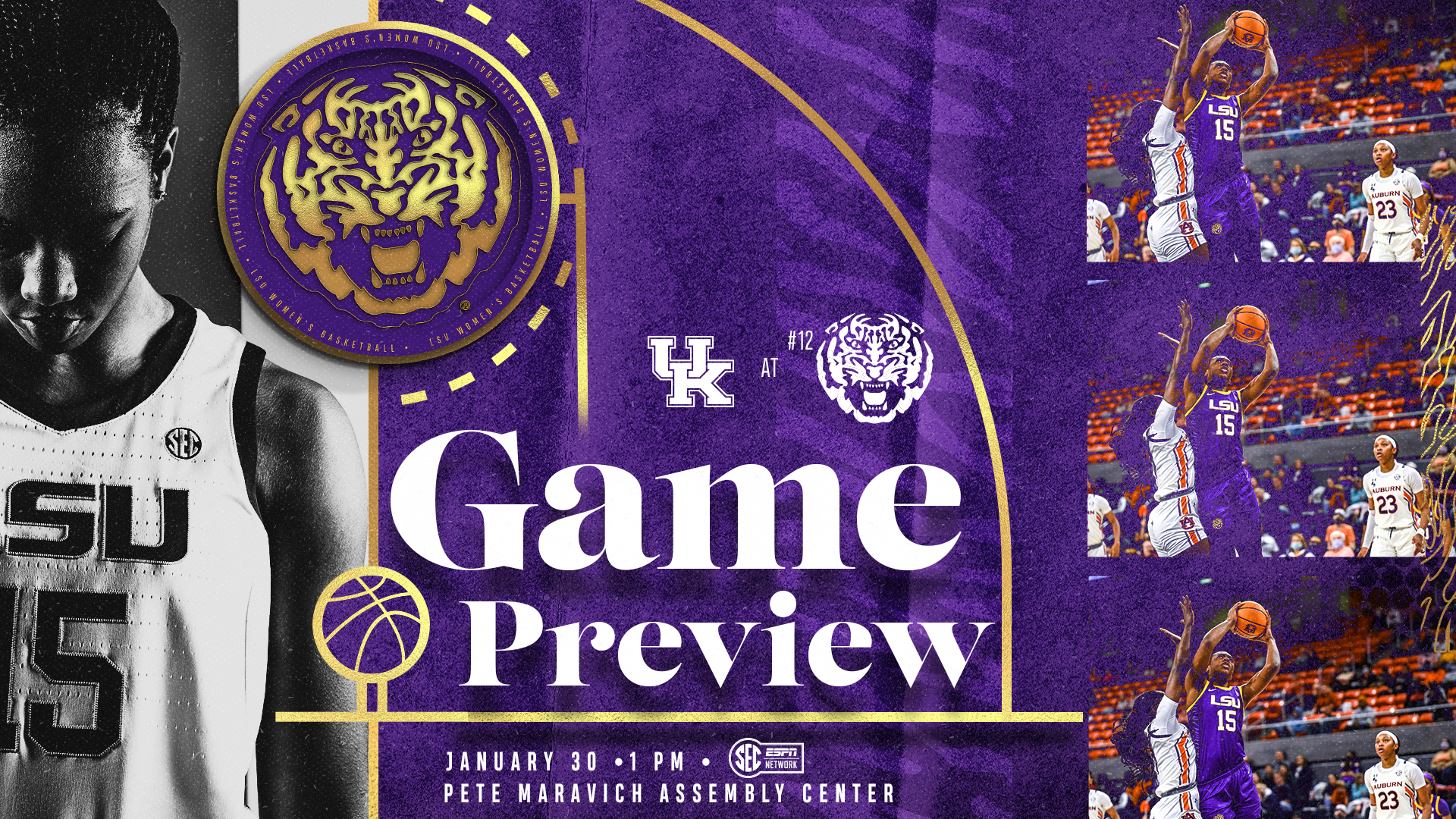 BATON ROUGE – The No. 12 LSU Women’s Basketball team (17-4, 5-3 SEC) will return to the PMAC on Sunday to host Kentucky on the SEC Network at 1 p.m. CT as the Tigers will look to rebound after two road losses.

LSU has not been home since January 16 when the Tigers beat Vanderbilt, 82-64. Following a week off after that game, LSU suffered road losses at Florida and at Arkansas. Kentucky will be playing its third road game of the week with a win at Auburn on Tuesday in a makeup game and then lost on Thursday at Vanderbilt in a game where Kentucky only had six players available.

“We have to be prepared and understand, you’ve got to win some of these games down the stretch,” said Head Coach Kim Mulkey. “We’re at the halfway point of the SEC. Let’s go see how many more of these things we can win.”

Nearly 60 former LSU Women’s Basketball will be in attendance on Sunday and will be recognized on the floor at halftime. Also at halftime, the Tiger Girls will perform their routine that won them a National Championship earlier in the month.

The game will be televised on the SEC Network with Eric Frede and Christy Thomaskutty. Patrick Wright and Shaeeta Williams will call the game on the LSU Sports Radio Network, 107.3 FM in Baton Rouge.

During LSU’s game at Arkansas, Khayla Pointer made program history with her 5 rebounds to give her 500 in her career. She is the only player in LSU history with 1,500 points, 500 assists and 500 rebounds. Pointer has been one of the top guards in the league this season and is No. 3 in the SEC with 18.71 points per game and No. 2 with 5.29 assists per game.

Faustine Aifuwa has played big in the paint this season for the Tigers and is leading the conference shooting the ball at 63.8-percent in SEC play. Autumn Newby has returned from the injury she suffered during the Missouri game after missing only one game. Since her return Newby has not missed a beat as LSU’s leading rebounder, grabbing 11 boards at Florida and 9 at Arkansas.

LSU will look to get back to its ways after dropping back-to-back games for the first time this season. The Tigers have been successful scoring the ball this season and are No. 2 in the SEC in scoring offense (76.38 ppg), scoring margin (+16.57) and field goal percentage (.466). The Tigers have also been one of the top rebounding teams in the conference this year.

It is unclear how many players Kentucky will have available on Sunday after having only six ready to go in Thursday’s game, but the Preseason SEC Player of the Year Rhyne Howard will be suited up. She recently became the third Wildcat player ever to reach 2,000 points, doing so in less than 100 games, and has averaged 20.29 points per game this season, No. 2 in the SEC. She is also No. 3 in the SEC in steals (3 per game). Over her past five games she has packed the stat sheets and has three double-doubles, averaging nearly 24 points.

Kentucky has struggled this season away from home with a 1-5 record on the road. Sunday will be the Wildcats’ fourth game in eight days.