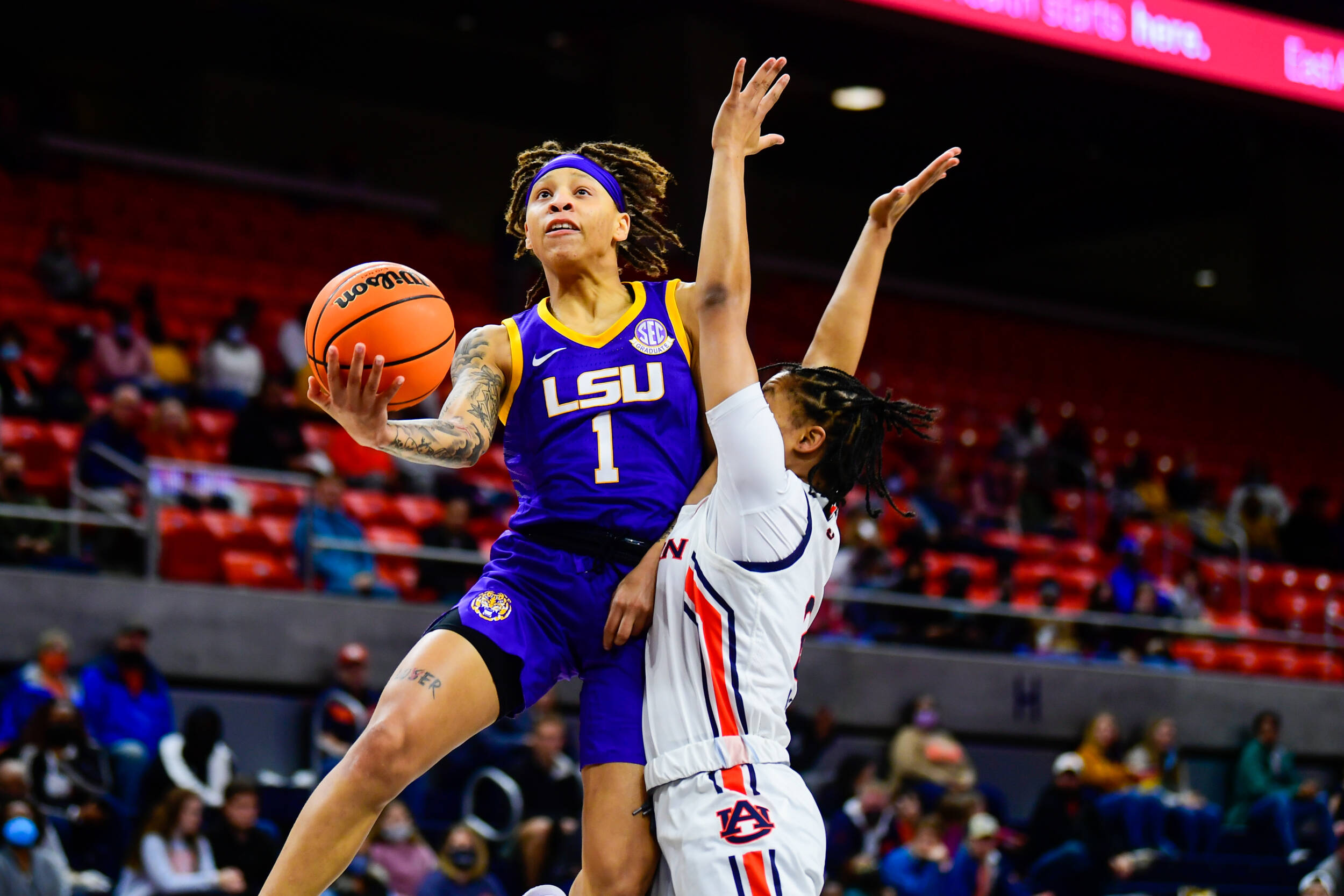 AUBURN, Ala. – The No. 13 LSU Women’s Basketball team used a first quarter offensive explosion Sunday afternoon to take down Auburn, 76-48, in Auburn Arena.

“I thought the shoot around at nine o’clock this morning was excellent,” said Head Coach Kim Mulkey. “Sweating. Getting after it. Excited to be back on that floor. They’re just growing up before your eyes.”

After their 13-game win streak was snapped on Thursday against No. 1 South Carolina, the Tigers dominated at Auburn to bounce back and improve to 15-2 overall (3-1 in the SEC). In three true road games this season, LSU is 3-0 with its other road wins coming at UL-Lafayette and then No. 13 Georgia.

The Tigers will be back home for two games next week in the PMAC, starting on Thursday against Missouri at 7 p.m. CT followed by Vanderbilt on Sunday at noon.

LSU jumped out to a quick lead in the first quarter and never looked back. Sixteen of the Tigers’ 26 first quarter points came in the paint.

Khaylya Pointer had her fifth double-double of the season, leading LSU with 24 points and 10 rebounds. She also had six assists. Faustine Aifuwa also played well with 10 points and five rebounds. Hannah Gusters scored in double figures for the first time since the season opener, scoring 13 points in Sunday’s win.

“I was happy to see our two bigs have good games today and we threw the ball in there to them,” Coach Mulkey said.

Aicha Coulibaly led Auburn with 13 points and six rebounds. Honesty Scott-Grayson was the only other player from Auburn to score double-digits with 12.

LSU held Auburn to 24.2-percent shooting and shot 46.0-percent itself. That number could have been much higher for LSU if it weren’t for missed layups though.

After Autumn Newby scored on LSU’s first possession, the Tigers missed their next four shots. Pointer then hit a three to put LSU up, 5-2. After an Auburn make, Alexis Morris scored her first points, a three from the top with the shot clock expiring. Pointer then intercepted a handoff and scored on the fast break. Out of the media timeout, Morris found Newby on a pick-and-roll to give LSU a 10 point, 14-4, lead. LSU was heating up and used 10-12 shooting to close the quarter on a 21-4 run, extending its lead to 26-8, as all five starters scored in the opening quarter.

Gusters, in to start the second quarter, quickly got involved on offense as Pointer found her with a lob pass over the top that she finished on the left block. Pointer reached double-digits for the seventh game in a row when she drove left, drawing a foul on her layup and finishing the three-point-play. Jailin Cherry ended an LSU scoring drought that lasted over three minutes to put LSU back up by 20, 38-18. LSU took a 40-21 lead into halftime.

The Tigers went on an early 6-0 lead in the third quarter, but Faustine Aifuwa and Newby were forced to the bench with them both picking up their third fouls. Gusters and Ajae Petty retrieved them and Petty quickly picked up her first points to make LSU’s fifth consecutive basket. Pointer sank a three from the top of the arc to put LSU up, 57-33, and make a sixth straight shot for the Tigers before they missed their next four. Morris scored on a layup as time expired in the third quarter to put LSU up, 61-41.

LSU started the fourth quarter on a 10-0 run to build its lead to 30 points. Amani Bartlett, Sarah Shematsi and Timia Ware all saw their first action of the game in the final quarter.