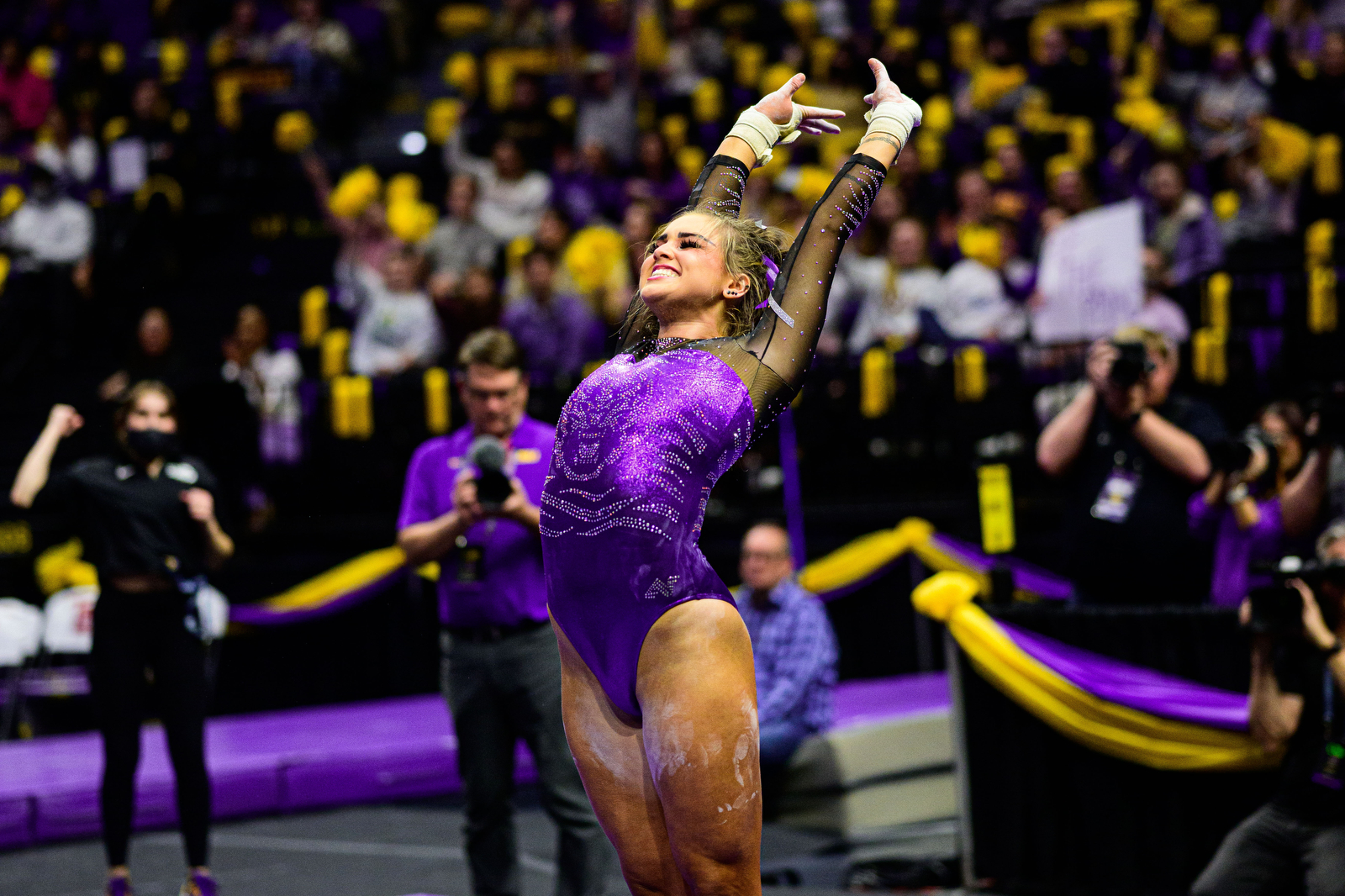 BATON ROUGE – The fifth-ranked LSU gymnastics team opened its 2022 season with a team score of 196.950 and win over Centenary on Friday night in the Pete Maravich Assembly Center.

“We started out really great and had some good things going for us, but after Sami (Durante) went out it broke the momentum for us,” head coach Jay Clark said. “Nothing horrible went on the last two events but I thought the mentality dropped and we never got going again. I’m pleased with a lot of good moments though.”

A crowd of nearly 10,000 were on hand to watch the Tigers start 1-0 on the year and win the program’s 10th-straight season opener.

LSU gymnasts swept the events and all-around on the night. Freshman KJ Johnson highlighted the night with a 9.90 on vault and victory on floor in her first routine with a 9.90.

“KJ is as explosive an athlete as we have,” Clark said. “I think tonight did a lot for her confidence. She really came through in the clutch and delivered the only 9.90 we had on floor tonight. She was nervous going out there, so it was great to see her go out there and do what she did.”

LSU started the night strong on vault, finishing with a score of 49.400. Haleigh Bryant opened her sophomore campaign with a 9.925. KJ Johnson started her career as a Tiger with a score of 9.900. Kiya Johnson and Kai Rivers both posted scores of 9.875 to help secure a dominant first rotation for the Tigers.

The Tigers continued their strong night on bars, posting a score of 49.500. The score marked the highest on the event in a season opener in school history. Alyona Shchennikova scored a 9.950 to match her career high and earn the victory. Dunne tied her career high with a 9.925 and Bryant set a new high with a 9.925. Rivers returned to the bars lineup in the second spot and scored a 9.875.

LSU posted a 49.075 on beam to extend the lead after three rotations. Bryant scored a 9.875 to wrap up her night. Christina Desiderio scored a 9.85 and both Johnson and Shchennikova earned scores of 9.80 for the Tigers. Reagan Campbell also tallied a 9.75 for LSU.

The Tigers wrapped up the meet with a 48.975 score on floor with five hit routines. Sarah Edwards started the rotation with a 9.825. KJ Johnson earned a 9.900 to continue her successful LSU debut and earn her first collegiate victory. Sierra Ballard scored a 9.75 and Elena Arenas earned a 9.775 to secure the victory.

LSU returns to action at 7 p.m. CT on  Friday, January 14 for its first SEC road meet at Missouri. The meet will be streamed live on SEC Network+ through WatchESPN.com and the app.