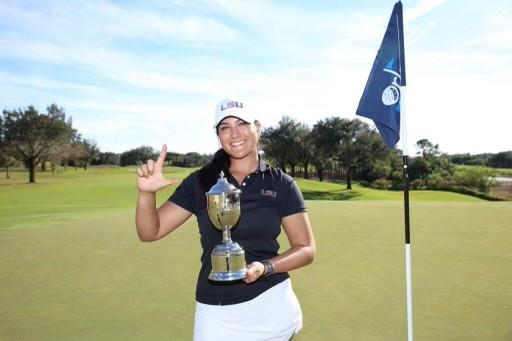 ORLANDO, Florida – Latanna Stone is not letting go of the winner’s trophy for the Women’s Orlando International Amateur tournament.

The LSU junior for the second straight year has captured the title, this time in dominating fashion at the Orange County National Golf Center and Lodge.

Stone, who prior to the event had posted her best World Amateur Golf Ranking at 48, had 13 birdies and an eagle during tournament play.

Stone has now won two major tournaments in the span of less than a month, having captured the Dixie Amateur in Pompano Beach, Florida in December. Stone finished at 9-under 275 for that 72-hole event.

LSU freshman Lauren Clark, a winner last week in the Citrus Invitational, shot rounds of 73-73-74 for a three-day total of 6-over 222 and finished T33.