No. 13 LSU Set To Host No. 1 South Carolina on Thursday 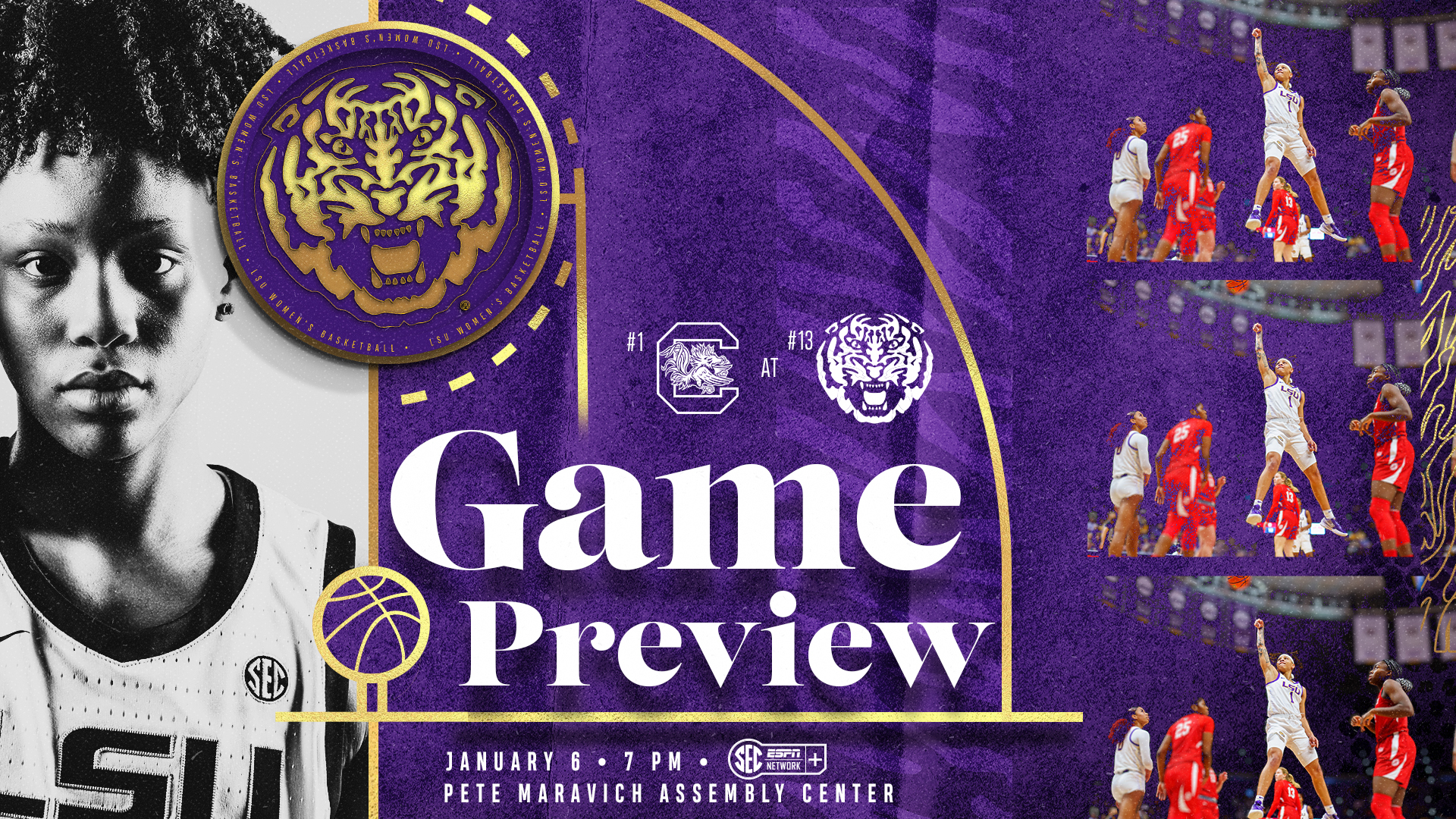 BATON ROUGE – Riding a 13-game win streak the LSU Women’s Basketball team (14-1, 2-0) will go head-to-head with No. 1 South Carolina Thursday at 7 p.m. CT in the PMAC and fans are asked to where white to White Out The PMAC.

LSU opened SEC play last week with wins at then No. 13 Georgia and against No. 23 Texas A&M at home and jumped to No. 13 in this week’s AP Poll and No. 16 in the Coaches Poll. Now the Gamecocks come to Baton Rouge having been the top-ranked team in the country throughout the entire season up to this point.

Prior to the game, LSU will honor Seimone Augustus on the court in recognition of her WNBA retirement as a player which she announced last May. Fans wishing to see that should be in their seats by 6:50 p.m. Former LSU baseball and current Houston Astros star Alex Bregman will also be in attendance and the Tigers will recognize him at halftime of Thursday’s game.

The game can be streamed online on the SEC Network + with Lyn Rollins and Victor Howell. Fans can also listen to the game on the LSU Sports Radio Network, 107.3 FM in Baton Rouge. There are $1 general admission tickets available at the LSU Ticket Office for healthcare workers and first responders. The lower bowl of the PMAC will be lined with white LSU Women’s Basketball t-shirts.

In Coach Mulkey’s first season leading the Tigers, LSU has taken a big jump and is ranked inside the Top-15 for the first time since spending two weeks at No. 12 during the 2013-14 season. LSU has wins over three ranked opponents this season. Thursday will mark the first time since 2008 that LSU will host a women’s basketball game between two teams inside the Top-15.

Khayla Pointer has played as one of the best guards in the SEC and is averaging 17.4 points, 6.8 rebounds, and 5.2 assists per game. In LSU’s win at Georgia last week, she hit two clutch three-pointers to push the Tigers to victory over the Bulldogs. She nearly recorded her second triple-double of the season Sunday against Texas A&M with 17 points, 9 rebounds and 8 assists.

Playing against her former team in Texas A&M, Alexis Morris went off for a career-high 30 points, 23 in the second half. In addition to Morris and Pointer, Jailin Cherry and Ryann Payne round out the Tigers’ backcourt which has proven to be one of the quickest Coach Mulkey has led.

“You’ve got to rebound the ball,” Coach Mulkey said about the matchup against South Carolina. “You’ve got to be physical. That’s the biggest thing right now. They’re going to have to defend people bigger than them.”

LSU’s bigs of Faustine Aifuwa, Hannah Gusters and Autumn Newby will have their hands full against National Player of the Year Candidate Aliyah Boston who averages a double-double and leads the Gamecocks with 16.9 points and 10.4 rebounds per game. Kamilla Cardoso, Laeticia Amihere and Victaria Saxton join Boston in the frontcourt with elite post presence.

In the backcourt, South Carolina has Preseason All-American Zia Cooke, Brea Beal and everything runs through Destanni Henderson who is No. 2 in the SEC with 5.3 assists per game.

South Carolina has two wins over teams that were ranked No. 2 when they played in UCONN and Stanford. The Gamecock’s only loss came last week in the SEC opener at Missouri when the Tigers made a lay-in as time expired on overtime. Despite the loss, South Carolina retained the top-ranking in both polls this week.

“We’re very aware of the fact that they’re the No. 1 team in the country,” Coach Mulkey said. “They’re supposed to win the league. They’re supposed to win the national championship. Listen, we understand that, but we also understand that if we win the game we still haven’t arrived yet. If we lose the game the sky is not going to fall in. We’ve got a lot of basketball in this league left to play and our goals will remain the same.”