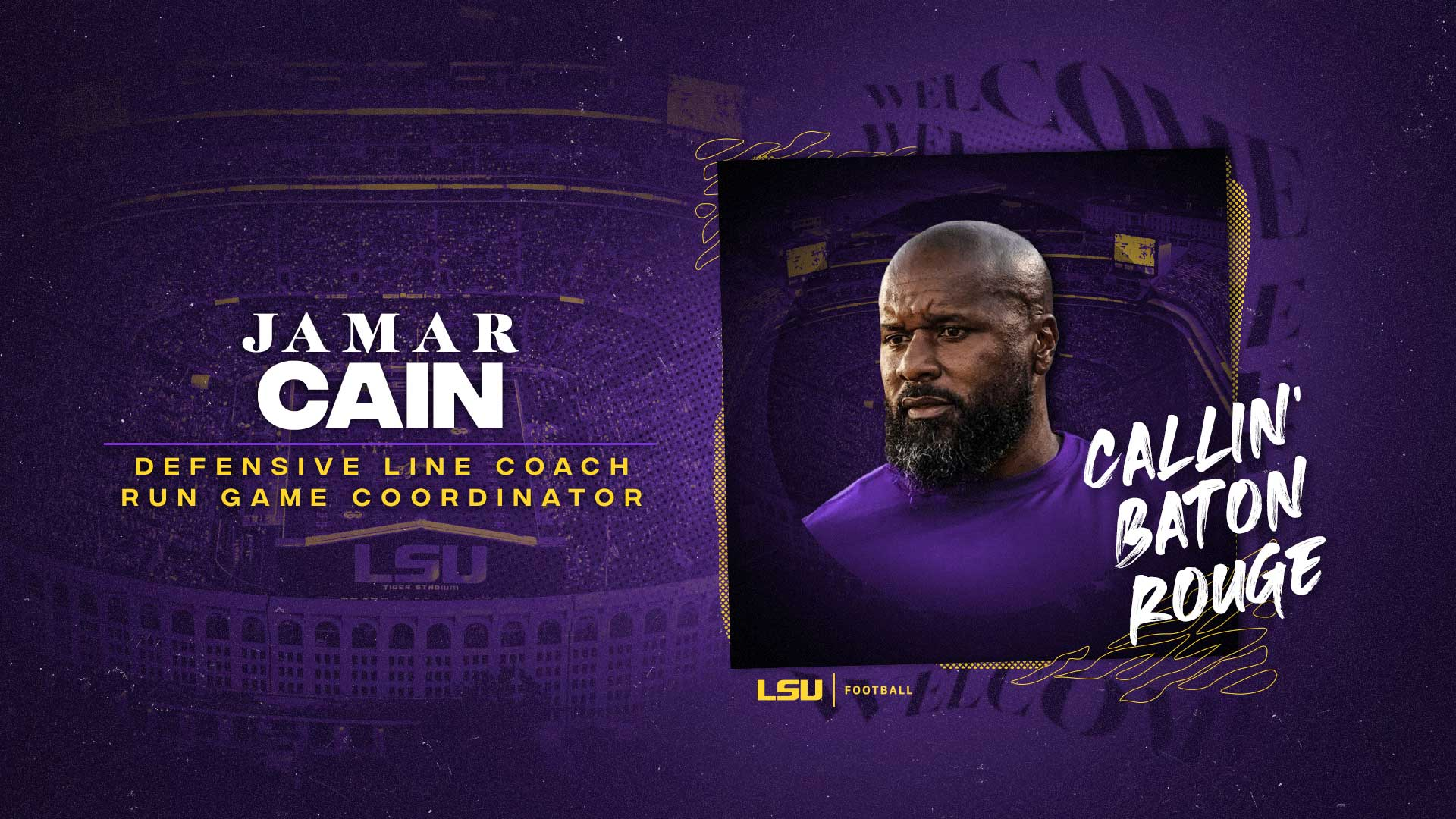 BATON ROUGE, La. – Jamar Cain, who was integral in the upgrade of Oklahoma’s defense over the past two seasons, has been hired as LSU’s defensive line coach and defensive running game coordinator, coach Brian Kelly announced on Wednesday.

Cain worked in 2020 and 2021 as Oklahoma’s outside linebackers and defensive ends coach, helping lead the Sooners to a 20-4 cumulative record, the 2020 Big 12 conference title and victories in the Cotton and Alamo Bowls.

“Jamar is an outstanding coach who has developed many players into elite defensive linemen during his coaching career,” Kelly said. “He understands what it takes to be successful at the highest level of college football and he will bring great passion and energy to our program. In order to have sustained success in the SEC you have to win the line of scrimmage and Jamar’s coaching ability will be instrumental as we work to build a dominant defensive front.”

Cain has supervised the development of Oklahoma All-America linebacker Nik Bonitto, who was voted the 2021 Big 12 Defensive Player of the Year after recording 39 tackles, 7.0 sacks, 15.0 tackles for loss, nine quarterback hurries and three fumble recoveries.

With Cain on its staff, Oklahoma in 2021 was No. 7 in the nation in turnover margin (+11) – as its defense collected 12 fumble recoveries and 11 interceptions – and the unit was No. 9 in the country in tackles for loss with an average of 7.5 per game.

Under Cain’s tutelage, Bonitto ranked 13th in the country in 2020 with 8.0 sacks in 10 games, while defensive end Ronnie Perkins – the third-round NFL Draft selection of the New England Patriots – had 5.5 sacks in six games.

Cain worked in 2019 as the defensive line coach at Arizona State, which finished the season 8-5 and had six takeaways in a 20-14 Sun Bowl win over Florida State.

He was the defensive line coach at Fresno State in 2017 and 2018, and his unit was one of the elements that helped the Bulldogs compile a 22-6 cumulative record, including one Mountain West Conference title and two bowl victories.

A year before Cain’s arrival at Fresno State, the Bulldogs ranked 83rd in the country by allowing 30.9 points per game. In each of the following two seasons, with Cain on board, Fresno State ranked in the top 10 nationally in scoring defense, culminating in a 2018 campaign in which it finished No. 3 in the country by allowing only 14.1 points per game.

Cain was the defensive ends coach at North Dakota State for three seasons (2014-16), as the Bison compiled a 40-5 record and captured the 2014 and 2015 FCS National Championships. He coached several impact players while at NDSU, including 2014 Buck Buchanan Award winner Kyle Emanuel, who was recognized as the best defensive player in the FCS, and the San Diego Chargers selected him with their fifth-round pick.

Cain spent the 2013 season at Wyoming, serving as defensive line coach and later as interim defensive coordinator, and he received his first full-time coaching opportunities as a defensive line assistant at the FCS level, beginning at Missouri State (2006-08; defensive ends) and continuing at Cal Poly (2009-12; defensive line).

He served for two seasons as a high school coach and one as an assistant coach at Sacramento City College before getting his opportunity at the FBS level as a defensive graduate assistant in 2005 at Ohio University under head coach Frank Solich.

Cain was a first-team all-California selection as a defensive lineman at Sacramento City College, and he played his final two collegiate seasons at New Mexico State, where was a 2002 second-team All-Sun Belt Conference selection as a senior.