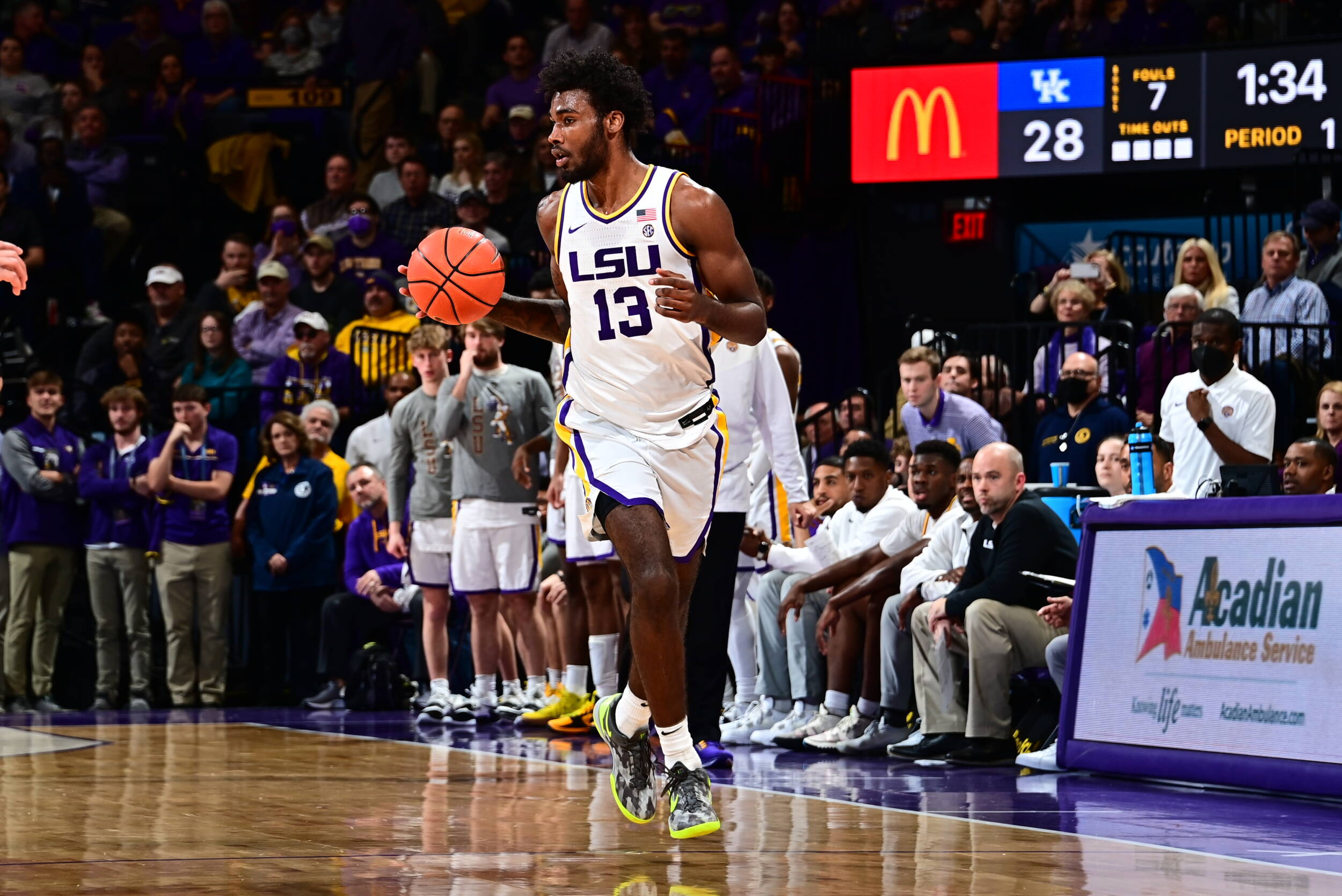 BATON ROUGE – The No. 21 LSU Tigers held Kentucky to just 10 points over the final 13 minutes of the game and rallied from nine points down to defeat the No. 13/16 Wildcats, 65-60, Tuesday night at the Pete Maravich Assembly Center.

The game was held on the newly dedicated Dale Brown Court in honor of the 25-year veteran of the SEC battles as head coach at LSU from 1972-97. The game was reminiscent of some of Coach Brown’s 18 victories over the Wildcats in his tenure.

Coach Will Wade recorded his second victory over Kentucky in his five years at LSU in the first of two meetings between the two schools. LSU is now 13-1 overall with a 12-game win streak dating back to last year in the Maravich Center. Kentucky falls to 11-3. Both teams are 1-1 in the Southeastern Conference.

The Tigers went to the dressing room up five, 35-30, but Kentucky made that the halftime score after picking up a loose ball and hitting a jumper as the horn sounded.

The started what would be a 14-2 run with four three-pointers and two free throws that switched the momentum to the Wildcats and put them up seven, 44-37.

The lead reached nine on another three pointer that made the Kentucky lead, 50-41, with 13:36 to play.

But then things started to happen for the Tigers. Gaines, who had struggled from the arc, buried a three to make it 50-44. And after a Kentucky miss, off an offensive rebound, Tari Eason scored and was fouled to make it 50-47 at the 11:35 mark.

Over the next almost four minutes between media timeouts, just one more point was scored on an Efton Reid free throw to cut the Wildcat lead to two at 50-48 with 8:08 to play.

It was Gaines who gave the Tigers a brief lead at 51-50, capping an 11-0 run on another Gaines three with 7:06 to play. Kentucky would quickly transition down court and Oscar Tshiebwe dunked to give Kentucky their last lead at 52-51.

But LSU didn’t let it phase them as the Tigers, with a raucous crowd of 11,808 cheering them on, got a three from Darius Days, a second chance bucket by Xavier Pinson, another Days three and a Tari Eason bucket to make it 61-52 with just 2:35 to play.

LSU was not yet in the bonus so Kentucky was fouling setting up a crazy sequence to close the game.

It led to a runout for Eason but Tshiebwe stole the ball off the pass and came back the other way with 21 seconds left. The pass up court almost went out of bounds. A Kentucky player saved it but Pinson stole it back and got the ball to Eason for a dunk with 14.4 seconds to play to put LSU up 63-60.

As Kentucky tried to go up court, Pinson forced a turnover, Wilkinson got the ball and sent it back to Pinson who reverse dunked it with 6.5 left. Kentucky hustled down court attempted a three pointer but Eason blocked it with 1.7 to seal the LSU win.

Eason led LSU with 13 points, while Pinson had 11 points, four assists and three steals. Brandon Murray, back after missing the Auburn game with a hamstring issue, played 28 minutes and had 10 points.

Mintz led Kentucky with 16 points while Jacob Toppin added 14 and Kellan Grady 13 points. Tshiebwe had 13 rebounds but was held to just eight points.

“It was a good win. I wish we would have closed it out a little bit better. I did not think we had a great start to the second half, to state the obvious. But I thought our guys played really hard. We were able to overcome some of our deficiencies because we played so hard. We did a nice job on the backboards. We battled really hard on the glass. You have to protect your home court in SEC play, and we were able to do that.”

On dealing with chaos in games…

“We have been able to work our way through it most of the year. We were able to figure it out tonight, but we have to be a little bit more disciplined with things.”

Guard Xavier Pinson
On the final six minutes…
“I mean, after last game, we worked a lot with the loss, knowing that we need we had to play harder and more aggressive on defense and offense, but as far as today, we do have to be better with the six- minute game. We were up six or seven when they (Kentucky) got a three and a dunk. We do have to do better with that and that’s one thing we’re going to work on in the lab.”

On thriving in chaos as a team…
“I feel like we have guys in our rotation that really build off the pressure and the chaos. Coach (Will Wade) preaches it all the time, whenever we get down and whenever they make a run, we know teams are going to make a run, we know that things are going to happen throughout the game in most scenarios in the SEC, so we’re really just ready for whatever, try to bounce back as quick as possible.”

On Eric Gaines…
“As far as Eric, he’s been down a little bit, everybody has been on him, he’s been through a lot, and for him to step up and show what he did today, I know I’m speaking for myself, but I know the whole team is very proud of him.”

Guard Brandon Murray
On his return…
“It felt good. I know my guys. They were just getting me right, basically just saying they just needed me and stuff, and I just knew I had to come back and just do what I had to do, just be that energy guy, just play my game.”

Forward Tari Eason
On Eric Gaines…
“That was big time. Big time players step up in big time moments in big time games, and that’s what Eric Gaines did tonight.”

On the wild finish…
Yeah, it was a wild finish. Obviously, it wasn’t exactly the way we drew it up, but you know at the end of the day a win is a win. That’s what we wanted and that’s what we came out with. We’ll go back and watch film and there are things we need to fix, little things that we can correct obviously, because those moments are pretty important, but a win is a win. It was a real important bounce-back game, especially after the last one (Auburn).”

On his team’s showing of adversity right to the end…
“I loved it and I told them as much after. We also had a couple of guys not play well, multiple injuries, and foul trouble, but they didn’t stop and kept playing. We had funky lineups in that we had never used before, and that gave us trouble offensively because it’s like ‘how do we play with this team?’ But, the guys fought, and that’s all you can ask. I was disappointed in how we started the game. We had a lot of guys where it was like they were almost intimidated by the game. You can’t play at Kentucky if you’re intimidated by a game, you just have to go and shoot balls that are there. I tried to get that late timeout, and I guess the official didn’t hear me, maybe my voice is going. For what we did and how we played, I just hate losing so.”

On his team playing down in players towards the end due to fouls and injuries…
“We were trying to win the game and I was trying to do anything I could. We had one or two bad turnovers, which is why we were in the game. One was Jacob’s (Toppin) lackadaisical throw to Kellan (Grady) and it gets stolen, but there wasn’t many live ball turnovers because if you have that against LSU, they score. They did a good job on getting back, but when Sahvir (Wheeler) went down, he’s the engine on this thing and gets us all moving. Like I said, the kids fought and fought. I thought they gave us a lot of physicalness, like WOW! Guys were getting knocked down, mostly our guys and what not. I’ll watch the tape, but they hung in and gave themselves a chance with a one-point game at the end. When you start off the game 1-for-11 and 5-for-11 from the foul line, I told them at halftime: let’s go win this! That was my message to them.”