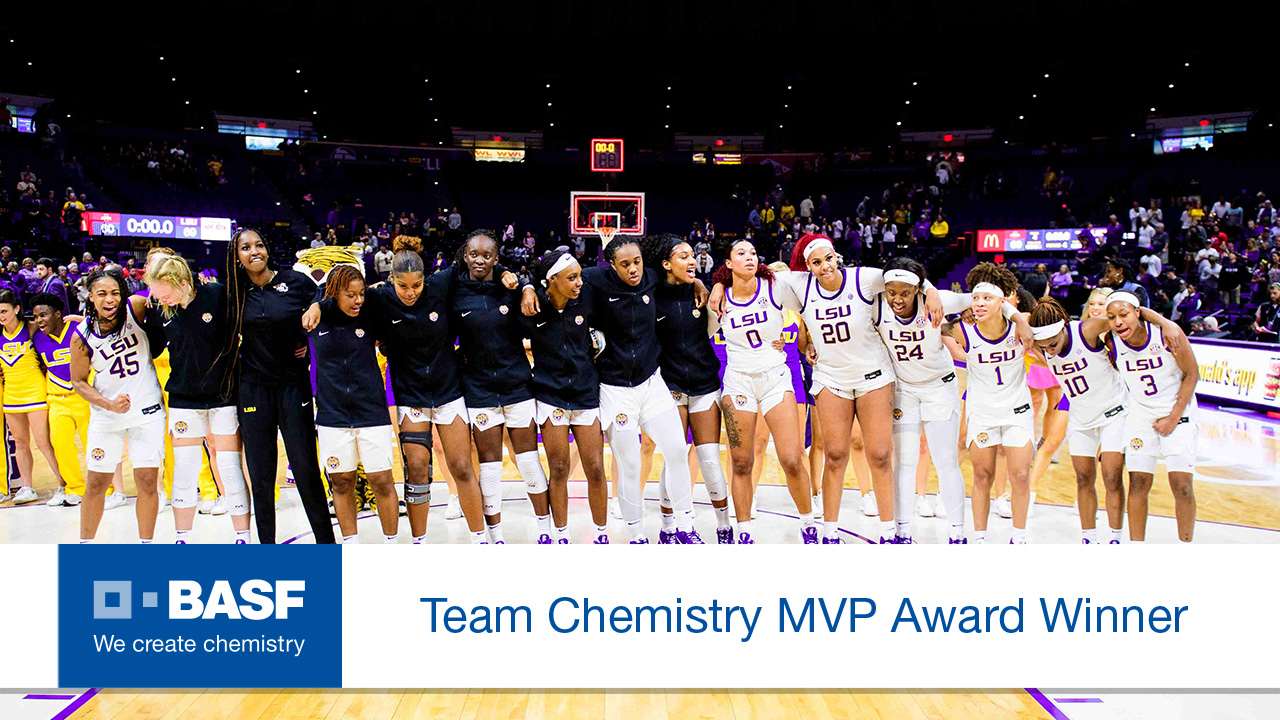 Baton Rouge, La. – The LSU women’s basketball team has been named the BASF Team of the Month for December after racking up a unblemished record of 8-0 during the final month of the 2021 calendar year.

Included in the month of December for the Tigers were ranked wins over No. 14 Iowa State and No. 13 Georgia as well as a tournament title at the West Palm Beach Invitational.

The Tigers are currently ranked No. 19 in the national rankings and have a record of 13-1 on the season. LSU hosts No. 23 Texas A&M on Sunday (January 2) before welcoming No. 1 South Carolina to Baton Rouge on January 6. Tickets can be purchased at lsusports.net.

The month began with a 69-60 win over No. 14 Iowa State on December 2 as part of the SEC/Big 12 Challenge. It marked the first ranked win for Kim Mulkey as head coach of the LSU Tigers. Alexis Morris dropped in a career high 25 points and Khayla Pointer added 20 herself to combine for 45 of LSU’s 69 points on the night.

LSU took a nine day break in between games to finish up the fall semester and got back into action with 40-plus point wins over Texas Southern (96-55) and Alcorn State (100-36) on December 12 and December 15, respectively.

LSU wrapped up a four game homestand on December 18 with a 77-51 victory over Bradley thanks to Faustine Aifuwa’s first double-double of the season where she posted 14 points and 10 boards. LSU forced 27 turnovers and scored 34 points off of Bradley’s miscues.

The Tigers then headed to Florida for the West Palm Beach Invitational for matchups against Clemson (December 20) and Texas Tech (December 21). LSU opened the tournament with a 70-56 dub over Clemson to advance to the championship game; Pointer led the way with a 20 point, eight assist performance, and Aifuwa notched a double-double for the second straight game with 13 points and 11 boards. All five of LSU’s starters scored in double figures in the championship game as the Tigers defeated Texas Tech, 74-60. Pointer had 19 points and Jailin Cherry poured in a season high 16 points in the contest; Pointer scored her 1,500th career point in the game as well.

LSU closed out its nonconference portion of the slate with a 83-47 win over Samford on December 27 to push their record to 12-1 on the season; it was LSU’s best nonconference record since going 14-1 during the 2006-07 season. Cherry kept her scoring ways going as she collected a career high 22 points one game after setting her season high; 16 of her 22 points came in the first half. Pointer chipped in 16 points and 11 rebounds for her fourth double-double of the season.

The Tigers travelled to Athens, Ga., to open up SEC play against No. 13 Georgia on December 30. LSU held off a late run by Georgia to claim a 68-62 victory at Stegeman Coliseum. Pointer scored 21 points, including two big late threes, to lead LSU to victory. Pointer also had two assists in the game to push her career assist total to 500.