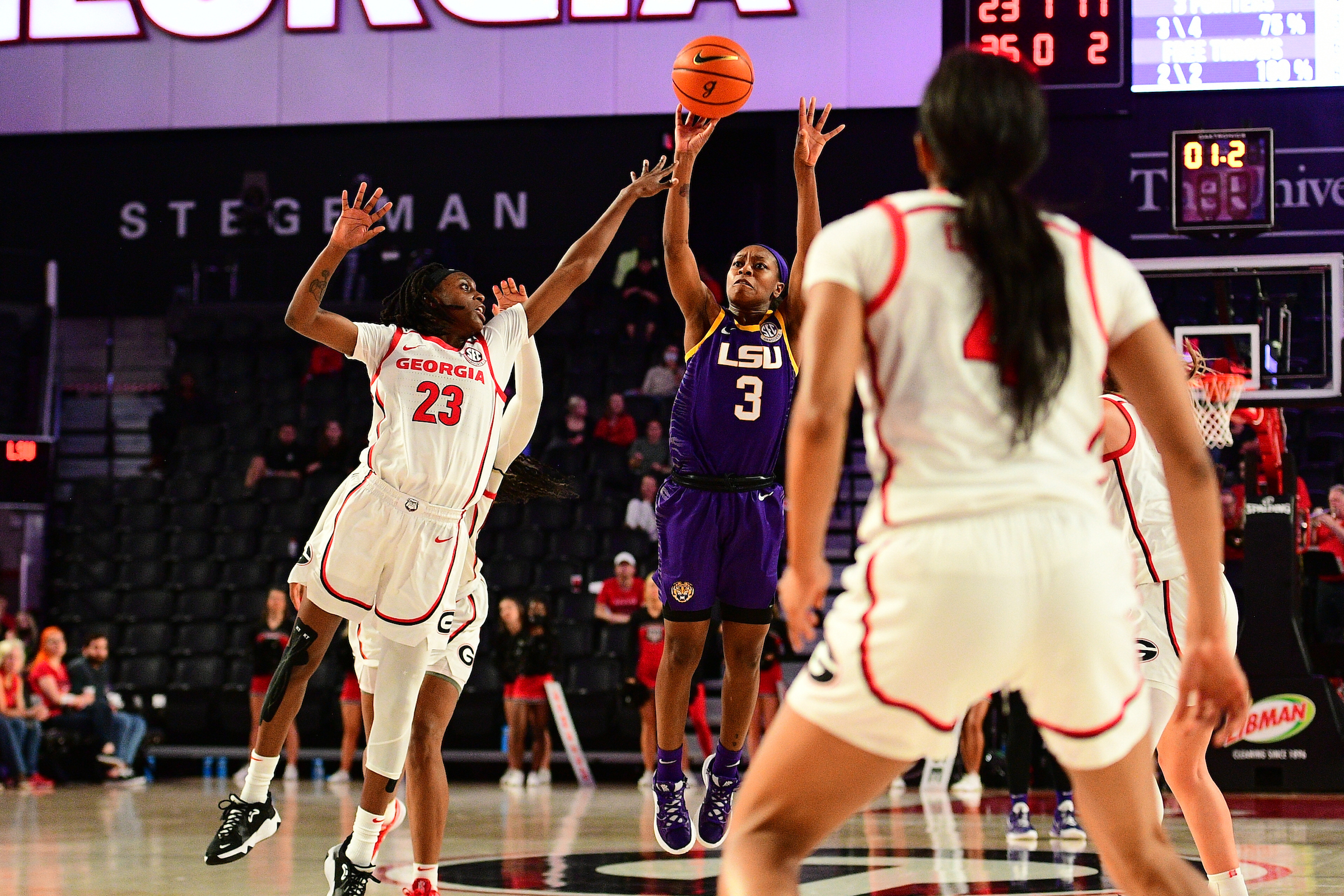 ATHENS, Ga. – The No. 19 LSU Women’s Basketball opened SEC play on the road at No. 13 Georgia with a 68-62 victory, winning its 12th consecutive game, Thursday night in Stegeman Coliseum.

“It’s their first SEC win with a new coach, a change in philosophy, a change in staff,” said Head Coach Kim Mulkey. “We were shorthanded, didn’t have Ryann (Payne) here to relieve those guards any.

“I just was so proud of them. We pretty much handled the whole game until they went to their 3-2 zone (in the third quarter). They don’t play much zone.”

“She comes right back and basically wins the game for you when she hits a big time three,” Coach Mulkey said of her point guard. “Great players have to have a short memory. They can’t be afraid to fail. I compliment that young lady.”

Faustine Aifuwa finished with 17 points, 9 rebounds and two blocks and Cherry had 10 points, 3 assists and 3 steals. Autumn Newby had nine points and was big on the boards with 10 rebounds.

Seniors Aifuwa, Newby and Pointer – all Georgia natives – were all pivotal for the Tigers in their final visit to Stegeman Coliseum.

Que Morrison led the Bulldogs with 26 points, 10 assists and 7 rebounds. Georgia’s Jenna Staiti, who leads the Bulldogs with 14.17 points and 7.3 rebounds per game, did not play as she was in health and safety protocol.

Thursday’s win was LSU’s second win over a Top-15 team after defeating No. 14 Iowa State in early December. The Tigers have two more games against ranked opponents coming up at home, hosting No. 23 Texas A&M on Sunday and No. 1 South Carolina, who lost tonight at Missouri, next Thursday night.

LSU got off to a quick start, sinking its first three baskets – two shots by Newby and a three from Pointer. Aifuwa got into the mix early too, scoring two buckets in the post to give LSU a 11-2 lead. At the 4:28 mark in the quarter Pointer found Cherry to give LSU a 15-11 lead, her 500th career assist. Georgia’s Morrison had 11 first quarter points to keep the Bulldogs in the mix as LSU held a 20-17 lead at the end of one.

A pair of Morrison free throws early in the second quarter brought Georgia within one, but back-to-back made shots from Gusters and Pointer gave LSU a 25-21 lead. Morrison continued to score for Georgia though as she started the game 7-9 and once again made it a one-point game. But again LSU extended the lead back to five with Newby and Morris makes, holding a 30-25 lead at the media timeout. Out of the timeout though, Georgia mounted a 6-0 run to bring it back within one, but LSU responded and continued to retain the lead. With under 30 seconds left in the half Pointer drew an and-one and then off a Georgia miss she took the ball and banked in a three at the buzzer to give the Tigers a 41-33 lead going into the break.

Pointer’s late-half spurt gave her 14 after two quarters to lead the Tigers, but it was LSU’s ability to score the ball in the paint that gave them the edge at halftime. LSU outscored Georgia in the paint, 22-14.

Scoring the first eight points of the half, LSU built its lead up, 49-33. Morrison promptly responded for Georgia with a pull-up three in transition. LSU went cold midway through the quarter when the Bulldogs switched from a man defense to zone and Georgia went on a run to make it a three point game, but Aifuwa ended the Tigers’ drought with under a minute left to give LSU a 54-49 lead with one quarter to play. LSU shot just 33.3-percent in the third quarter after shooting 58.1-percent in the first half.

Georgia took its first lead in the game after scoring the first seven points in the quarter, capped off by a three from Barker. Cherry put LSU back in front with a layup on the fastbreak to end the Georgia run. Over the next few minutes the two teams traded baskets, the lead not jumping greater than one for Georgia or LSU. That changed when Pointer hit a three with 2:14 remaining to give the Tigers a 62-60 lead and Coach Mulkey promptly called a timeout to organize the defense. Morrison tied the game out of the timeout and it remained that way until Pointer hit a three with one minute remaining and the shot clock winding down. Morris made it a five point game, sinking two free-throws with 10.9 seconds remaining.