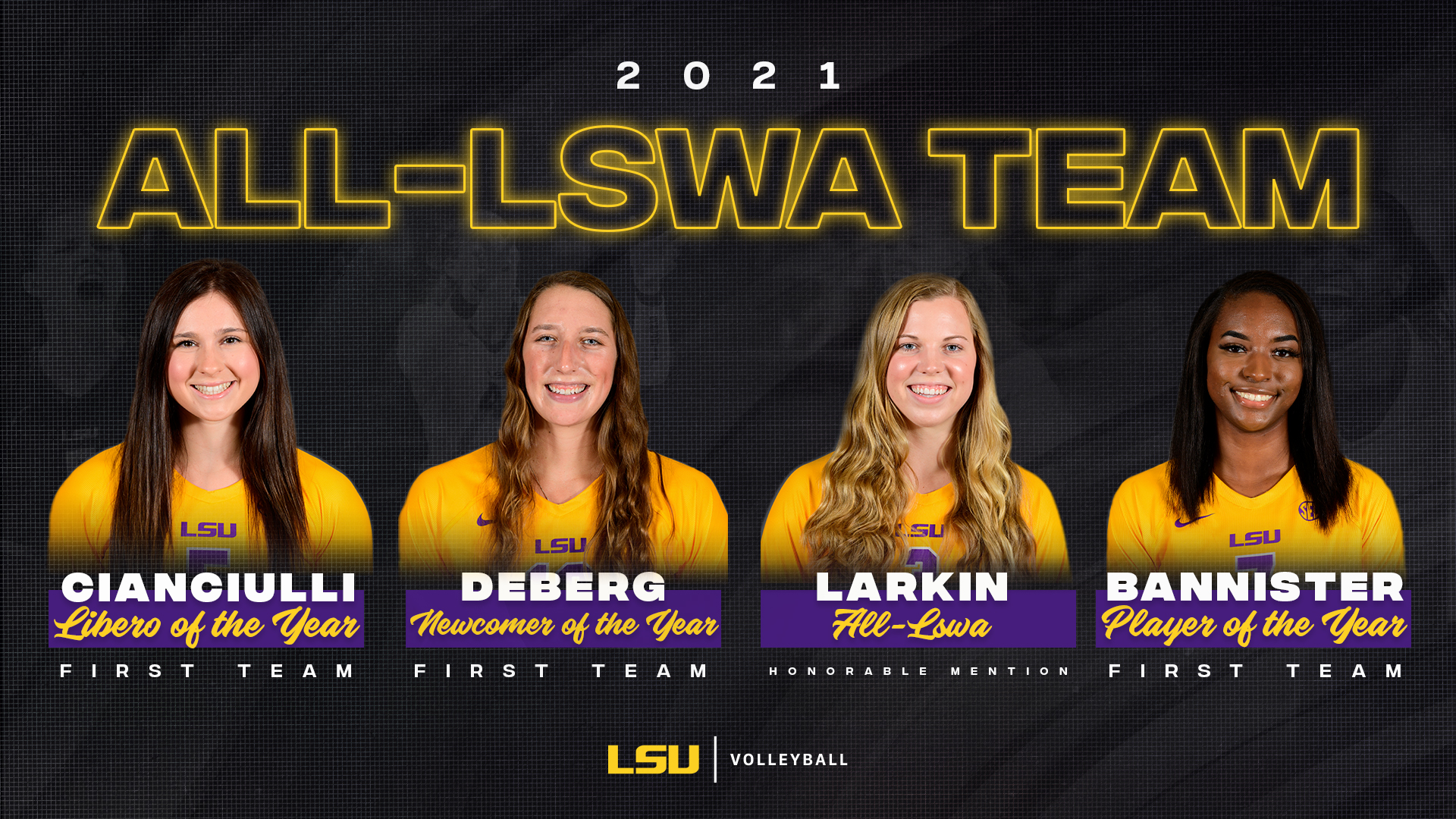 Taylor Bannister was named the LSWA Player of the Year for the third time in her career (2018, 2020-21), Raigen Cianciulli was selected the LSWA Libero of the Year for the second time in her career (2017, 2021) and Kylie DeBerg won LSWA Newcomer of the Year. All three were tabbed to the 2021 All-Louisiana First Team, marking the first time LSU had three or more listed on the first-team since 2012. Ella Larkin was selected All-Louisiana Honorable Mention.

Bannister is now a five-time All-Louisiana selection and has won her third postseason award this year after being named to the AVCA South All-Region Team and All-SEC Team. Bannister finished the season with 3.12 kills per set, 262 total kills, and a .239 hitting percentage, while also tallying 25 aces and 63 total blocks. Bannister became the program’s all-time leader in kills and has 1,902 career kills – a mark that ranks No. 7 all-time in the SEC. Bannister concludes her career with 131 matches played (No. 7 all-time) and averaged 3.80 kills per set ranking No. 2 all-time in program history.

Cianciulli is a two-time All-Louisiana Second Team selection with her first accolade coming in 2017 where she also won Libero of the Year. In 2021, Cianciulli became the SEC’s all-time leader in career digs with 2,260 after tallying 498 digs this season to lead the SEC. The Spring, Texas native averaged 4.57 digs per set, ranking No. 2 in the SEC. She compiled 11 matches with 20 or more digs, including a five-match streak that was capped by a 34-dig performance at Mississippi State (Oct. 2). Cianciulli was also tabbed AVCA South Honorable Mention.

DeBerg, a transfer from Missouri, became the third Tiger to be named LSWA Newcomer of the Year and the first since Sam Dabbs won the award in 2008. DeBerg led LSU this season with 397 total kills, 3.71 kills per set, and 39 total aces. DeBerg’s 3.71 kills per set ranks No. 6 in the SEC and is tied at No. 9 with Detra Brown (1986) in the LSU single season record book. The graduate transfer also ranked No. 4 in the SEC with 4.36 points per set this season. This is also DeBerg’s third postseason award this year after being selected to the AVCA South All-Region team and All-SEC team.

Larkin is the fourth All-Louisiana Honorable Mention honoree and the first from the setter position since Lindsey Flory (2018). Larkin, who was named to the SEC All-Freshman Team finished the season ranked No. 7 in the SEC with 8.35 assists per set overall and 9.11 assists per set in SEC matches only. Larkin also contributed 2.79 digs per set (301 total), 60 blocks, 46 kills and 23 aces to her season totals.