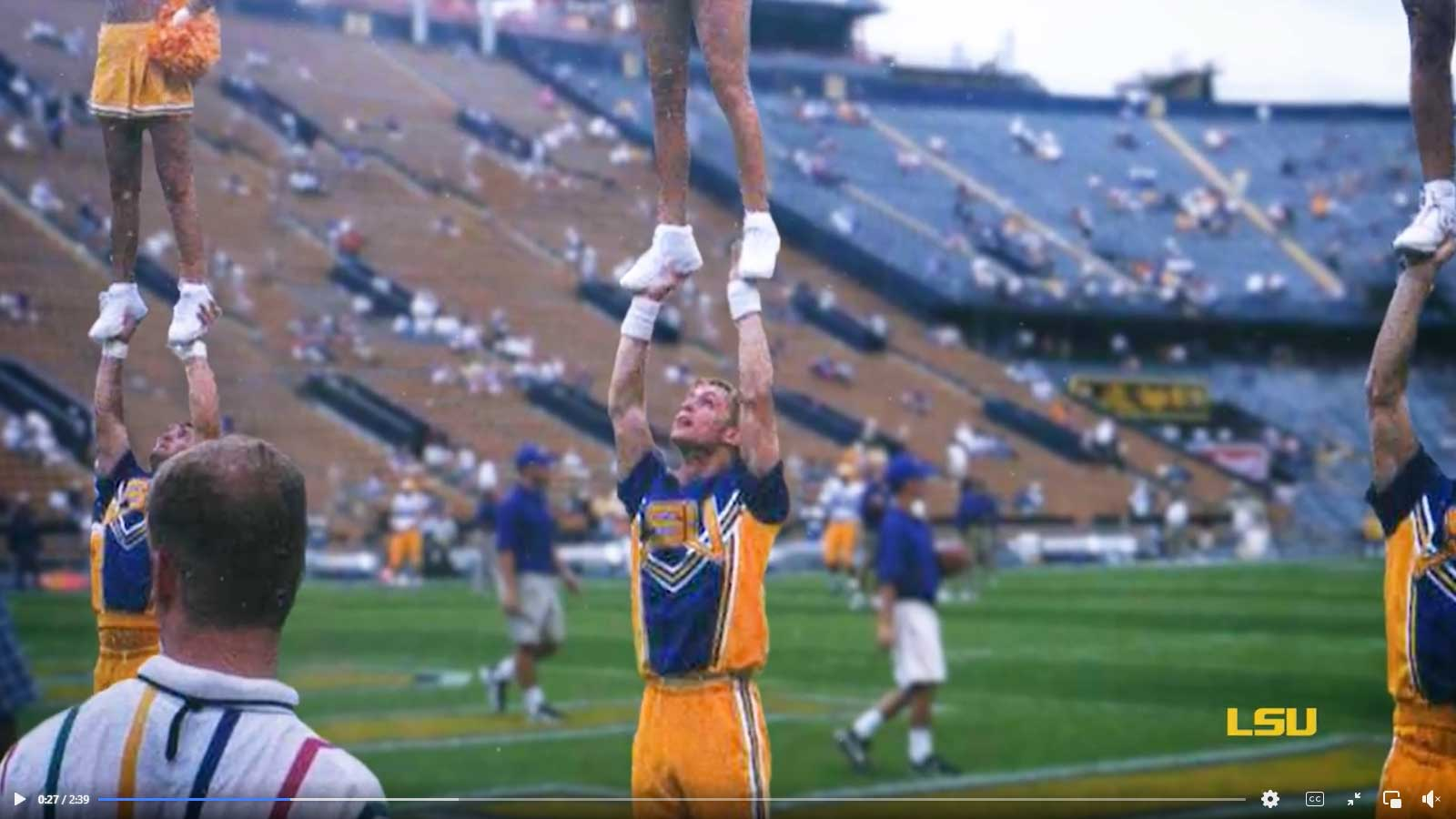 “I’ve gone on a lot of auditions to do back flips, and I joke sometimes that I have back flipped my way through life. Literally backflips paid for my college. Backflips have gotten me lots of jobs,” Lowin said.

Lowin, a 2002 graduate of LSU, learned how to backflip as a teenager, training as a gymnast in his hometown of Sulphur, La.

“I ended up being a really good gymnast,” Lowin said.

He said it was his tumbling skills that landed him a spot on the LSU cheer team.

“Getting to experience being inside the stadium for a football game, or any event really—I’ll never forget those times, it was wonderful,” Lowin said. “When we would run out with the football, I would do backhand springs all the way down the field. I know at some point I did at least 30 backhand springs, and at the end of it, I wouldn’t be able to see.”

Lowin’s skills landed him in a galaxy far, far away, on Disney+’s “The Mandalorian.”

“So many really crazy moments: riding speeder bikes and fighting different creatures, and things like that,” Lowin said. “The creativity is just really cool. Every day to go in and be in awe of what other people do and to be a part of this, it’s like playtime even on the longest, hardest day of that show.”

The actor is known to “Star Wars” fans for his role in “The Mandalorian,” bringing the character of Din Djarin to life.

“My first day of actual work was with Bryce Dallas Howard. She was directing the episode and we were in this huge outdoor space, and it was just a really, really big set and then a lot of people, and it was the biggest thing I’d ever worked on. So there’s that moment of where I think I might pee my pants, but I can’t do that. You know? Because no matter what I think, you can’t really prepare yourself for some of those moments,” Lowin said.

Prior to being cast in “The Mandalorian,” Lowin had traveled the world performing in Cirque du Soleil. He saw his first show while a student studying journalism and theater at LSU.

“The show was in Biloxi and I had never seen a show, and I didn’t really know what they were about. When I saw it, I didn’t know that there was an option to perform still in theater but use my athletics and my gymnastics. It was everything combined into one thing, and so I really just fell in love with it, and realized it was something I wanted to do,” Lowin said.

By the end of his senior year at LSU, he started auditioning for Cirque du Soleil. While he wasn’t initially cast in one of their productions, he booked his first job as a performer with Tokyo Disney instead.

“My first job after LSU was to go to Tokyo Disney for a year and perform,” Lowin said. “After Tokyo Disney, I went back to New York, and I ended up performing on cruise ships for about three years. That was another great experience because I got to go on as a guest entertainer and do a lot of aerial and gymnastics.”

After performing on cruise ships he performed in Las Vegas before finally booking a job in a Cirque du Soleil show.

“There was a show called ‘Kooza,’ and there’s a character called the Trickster that had been my dream role within the company, and I’m just kind of a villainous character. It was the lead character of the show. I sent in a video to casting, just to try to let them know I was interested in that. Then kind of out of the blue, I got offered the job,” Lowin said. “The only tricky part of that was when I got offered that job, I was already 35 and tumbling on a hard stage doing the same type of tumbling I had done at LSU in college, and there’s just a limit to what you can put your body through.”

After hundreds of performances and touring around the world, Lowin moved to Los Angeles to pursue a career as an actor, leading him to audition for “The Mandalorian.”

“The audition was really intense. Getting to work on ‘The Mandalorian’ has been just such a gift,” Lowin said. “They ended up doing a spinoff called ‘The Book of Boba Fett,’ and I got to play a different character in that. And now we’re shooting the third season of ‘The Mandalorian.’ I remember being in my dressing room the first time and catching a glimpse of myself, and that suit, and ‘Whoa, who’s that guy?’ It was just really mind blowing at first.”

Lowin believes Din Djarin’s suit is an important piece of the fans love for the show.

“I think the reason people love it is because they can see themselves in it, and you can kind of decide who you want that character to be. I really liked that part of my face not being shot because you get to become this character. With the weight of the suit, the way he moves and the things he would do or not do, it’s like you really just get to be someone else,” Lowin said.

Lowin collaborates with the other actors who also play a role in the show. But he said his favorite character is a little smaller, and green.

“Some of my most favorite memories so far on the show are working with Grogu,” Lowin said. “And it takes a team of people to make him come to life.”

From Louisiana to now flying in space, Lowin said his LSU degree helped him get there.

“How does one’s degree prepare you for duals in space? The first thing I just thought of was having to work all of the audio and visual equipment when I was learning to edit. And being inside the spaceship and making sure I hit the right button at the right time,” Lowin said. “I definitely hoped with my experiences at LSU, with athletics and in journalism and theater, I think I saw a lot of options. I definitely felt like I was set up for success. If you want something, if you can envision it and you’re willing to work for it, then yeah, the sky is the limit.”