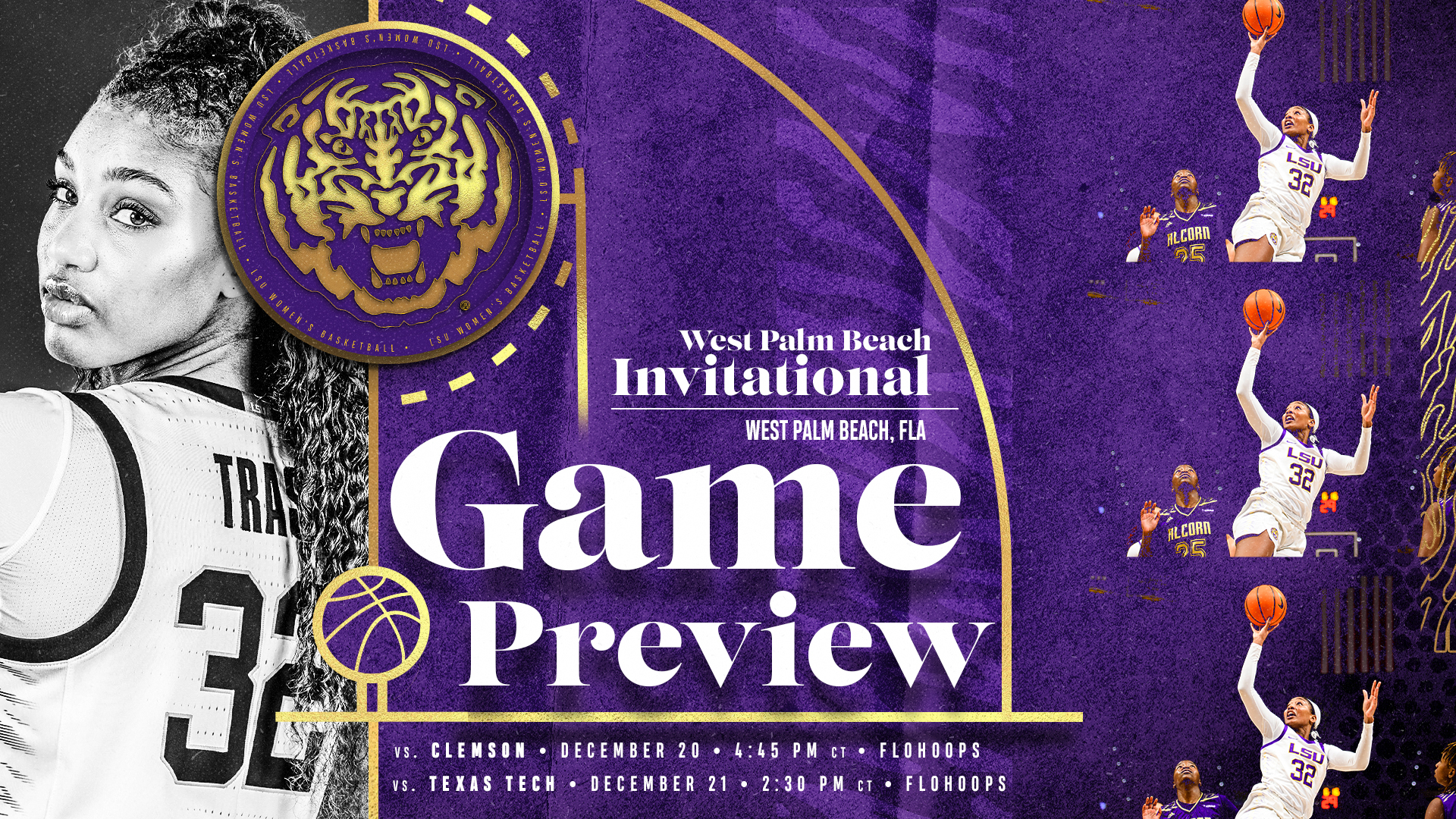 WEST PALM BEACH, Fla. – The LSU Women’s Basketball team will take the court twice at the West Palm Beach Invitational against Clemson and Texas Tech as the Tigers will have the opportunity to improve its win total from all last season.

After going 9-13 a season ago, first-year LSU Head Coach Kim Mulkey has the Tigers on an eight-game win streak, sitting at 9-1. The Tigers can improve their win total from last season before conference play even begins.

LSU will face off against Clemson on Monday at 4:45 p.m. CT and then Texas Tech on Tuesday at 2:30 p.m. Both games will be able to be streamed on FloHoops and fans can listen to the games on the LSU Sports Radio Network, 107.3 FM in Baton Rouge.

“The biggest thing right now is keeping them focused,” said Coach Mulkey with two games right before the Christmas holiday.

“I’m feeling pretty good,” said Faustine Aifuwa who had her first double-double of the season Saturday against Bradley. “We’re still locked in. We’re still focused going to Florida and staying prepared. We have two great teams ahead of us. We’ve got to stay locked in and do what we need to do.”

After Christmas LSU will host Samford on December 27 for its final non-conference game before opening SEC play up on December 30 at Georgia.

LSU has won eight games in a row, including three over the pas week. The Tigers are leading the SEC shooting the ball 47.8-percent from the field helping them score 78.1 points per game. Leading the offense has been the backcourt duo of Alexis Morris and Khayla Pointer. Morris transferred to LSU from Texas A&M and was cleared eligibile by the NCAA prior to the FGCU game. She has scored double-digits in all nine games she has suited up in a LSU game. Pointer has lived up to her hype as a Preseason All-SEC player averaging 16.8 points, 6.7 rebounds and 4.5 assists per game. Along with a triple-double to open the season, Pointer has recorded two additional double-doubles.

The Tigers’ defense has been stout too. LSU has forced 20.1 turnovers per game this season, the third highest in the SEC. The defense has turned into offense as the Tigers have averaged 22.8 points of turnovers. LSU has grabbed 30.1 defensive rebounds per game, limiting second chance opportunities with the third best mark in the SEC and 28th in the NCAA.

“We love to get after it,” said guard Ryann Payne. “We love to play defense. Defense leads to better offense. Especially with our transition game, we’re doing numbers and we’re going hard in transition. We’re efficient”

Something will have to give as LSU’s defensive rebounding will have to go up against a Clemson team that grabs 17.2 offensive rebounds per game, the seventh most in the NCAA. Clemson is 6-4 entering the game and averages 66.0 points per game. The Tigers are yet to win a game away from home with an 0-2 record in road games. This will be their first neutral site game. Delicia Washington leads Clemson with 12.6 points, 6.9 rebounds and 3.1 assists per game. Clemson is coached by Amanda Butler who is in her fourth season there.

“(Against Clemson) You better get back in transition defense and you better be able to defend the dribble penetration,” Coach Mulkey said.

Texas Tech is 7-2 and has a game scheduled against Ole Miss on Monday. With four players averaging double-figures for the Red Raiders, Texas Tech as a variety of options scoring the ball led by Vivian Gray who averages 17.0 points per game. Taylah Thomas is another player to watch who averaged close to a double-double with 10.2 points and 9.9 rebounds per game.

“They have one of the good players in the country in Vivian Gray and she used her Covid year to come back,” said Coach Mulkey. “She transferred there from Oklahoma State. She’s an All-Conference, undersized post player – tough as nails. They have a the coaches daughter who runs the point for them – Krista Gerlich’s daughter.”