Tigers Cruise to Victory Over Bradley, 77-51 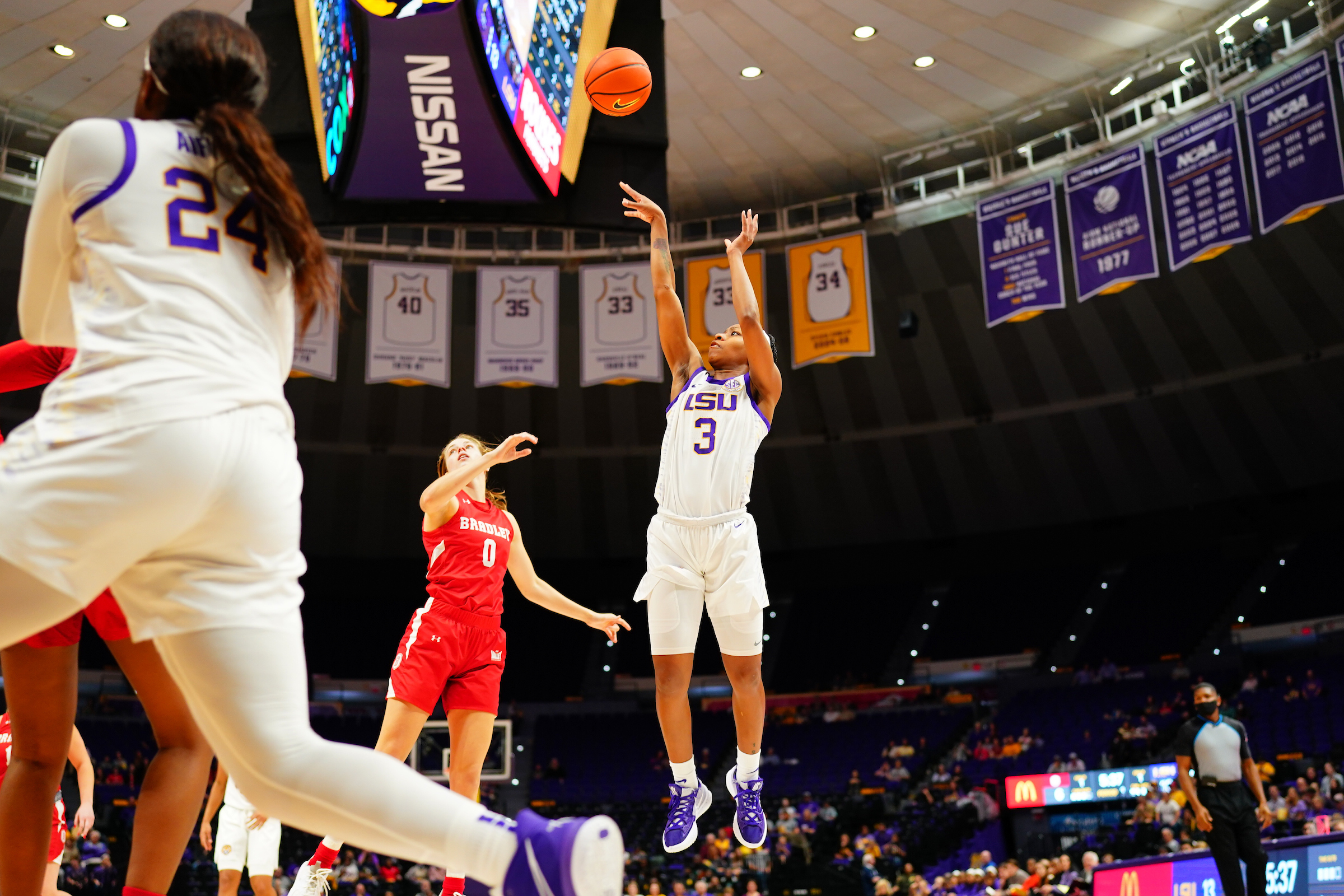 BATON ROUGE – The No. 22 LSU Women’s Basketball team won its eighth consecutive game Saturday in the PMAC, cruising to a 77-51 win over the Bradley Braves.

LSU improved to 9-1, winning its eighth game in a row and matching last year’s win total.

“That’s a milestone,” said Head Coach Kim Mulkey. “I also will tell them next game that they have an opportunity to win more games than they did last year.”

Faustine Aifuwa recorded her first double-double of the season as she posted 14 points, 10 rebounds, and one assist. Alexis Morris and Jailin Cherry had 17 and 12 points for the Tigers, respectfully, as Morris led the Tigers in scoring. Ryann Payne had 10 points as four finished in double figures. Autumn Newby scored four points and grabbed ten rebounds. Sarah Shemasti finished the game with a career-high eight boards.

Forcing 27 turnovers, LSU scored 34 points off of turnovers and 27 points on the fast break. LSU was dominant getting the ball inside, finishing with 44 points in the paint.

The Tigers will leave immediately following the game for the West Palm Beach Invitational where they will take on Clemson on Monday and Texas Tech on Tuesday. Both games can be streamed on FloHoops.

The Tigers forced turnovers on three of Bradley’s first five offensive possessions and started out 4-of-5 shooting the ball, hopping out to an early 9-0 lead as the Braves were forced to take a timeout less than two minutes into the game. Morris intercepted a pass to the block out of the timeout and found Pointer on the fastbreak for a layup. Bradley scored its first bucket, a three-pointer, at the 6:20 mark in the first quarter after LSU scored the first 13 points of the game.

The Tigers used a late burst in the quarter to go on an 8-0 run and finish the quarter with a 28-10 lead, putting up a season-high in first quarter points. The Tigers forced 12 turnovers that led to 21 points in the opening quarter.

LSU opened the second quarter scoring the first 12 points over the first four minutes, continuing to extend the lead. Payne and Trasi were the lone scorers during the run, both putting up six points. After a scoring drought for the Tigers, Newby scored her first points with a minute remaining in the half after grabbing nine rebounds. LSU led 47-16 at the half.

Newby opened the third quarter up with a fifteen-foot jumper from the baseline. Aifuwa was able to score the ball and was aggressive on the boards. After scoring 10 points in the first half, she reached 10 rebounds, grabbing an offensive board and laying it back up to get her double-double. Morris scored a bucket in the third quarter to push her into double-digits for the ninth straight game.

After a string of turnovers and no points early in the fourth quarter from LSU’s bench players, Coach Mulkey subbed her starters back in the game with LSU holding a 69-36 lead. Morris immediately hit back-to-back jumpers from the right elbow. The Tigers closed out the game, 77-51.