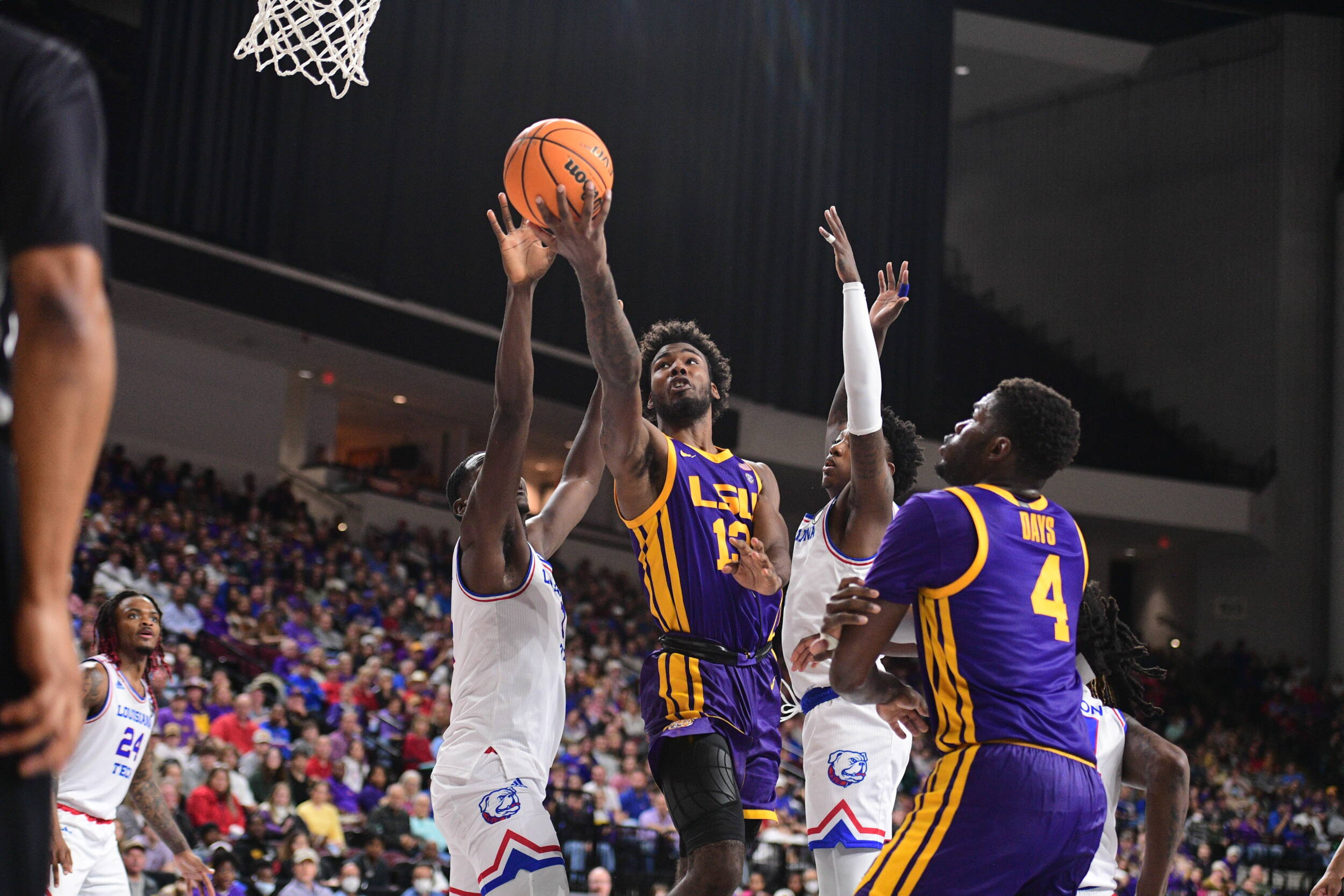 BOSSIER CITY, Louisiana – Tari Eason scored 10 straight late points and Darius Days had a career-high 18 rebounds as the LSU Tigers rallied from 13 points down in the first half to win 66-57 over Louisiana Tech in the Battle of Bossier City Saturday night at the Brookshire Grocery Arena.

Eason finished with 21 points with eight boards on 8-of-15 shooting while Days had his 19th career double double with 13 points and the 18 boards, also moving past the 1,000-career points mark. Xavier Pinson added 10 points.

Tech was led by Kenneth Lofton Jr., and Amorie Archibald with 13 points each while Exavian Christon had 11 points.

Louisiana Tech scored the first 11 points of the game and that’s where the game stayed for much of the first half of play. The Bulldogs put an 18-5 advantage as LSU hit just 2-of-10 shots.

Days got his 1,000 points on his first bucket of the game at the 9:35 mark and at halftime he had seven points and 10 rebounds.

The Tigers like they did against Georgia Tech one Saturday ago, came out again pressing the pace and a 14-3 run gave LSU a 41-38 lead for the first time at the 16:02 mark.

From there the game seesawed back and forth and entering the final 5:51, the Tigers tied the game at 55-55 on a Pinson bucket. In those final minutes, LSU outscored LA Tech 11-2, 10 of which came from Tari Eason. The sophomore hit an in-rhythm three, converted an and-1, and put the game away with an emphatic late dunk clinching the win.

After the game, Eason said, “My momma always said, ‘Big-time players step up in big-time moments during big-time games.’ It’s all about being level-headed, the next play is your best play, I’m trying to do whatever I can do to help the team win, so I did what needed to be done tonight.”

LSU got 19 points off 16 Bulldog turnovers and had a 26-22 advantage in points in the paint.

LSU closes out the pre-Christmas schedule on Wednesday at 7 p.m. against Lipscomb.

Head Coach Will Wade:
“Great game. I thought Louisiana Tech played tremendously. They did a great job shrinking the floor in the first half. They made our driving angles very tough. They made life difficult on Efton Reid. I thought Tari [Eason] and [Darius] Days were tremendous. Days had 18 rebounds. The offensive glass kept us alive in the first half. I thought Eric Gaines played a great floor game, he played maybe one of his best games at LSU. Tremendous atmosphere, LA Tech is a tremendous ballclub. The fans looked even split, maybe we had a few more, but it was a great atmosphere. It was good for basketball in this state that we come up here and 6,500 people to watch two teams play on a neutral court. I thought it was a great afternoon of basketball and excited to get a win.”