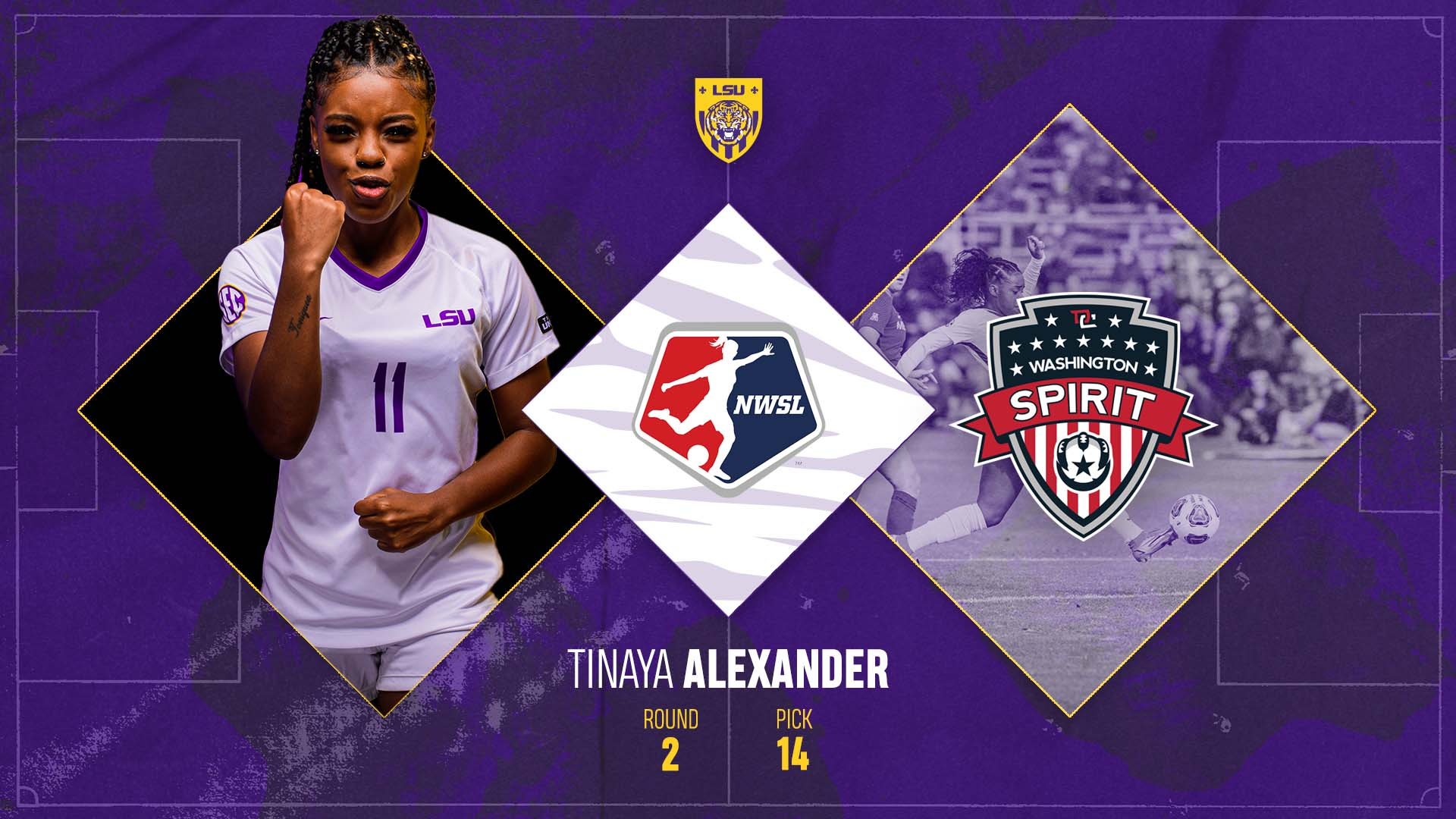 Baton Rouge, La. – LSU soccer’s Tinaya Alexander was selected by the Washington Spirit as the No. 14 overall pick (Rd. 2) in the 2022 National Women’s Soccer League Draft on Saturday afternoon.

“The NWSL has always been my goal,” Alexander said after being picked. “I always wanted to come to America and play at the highest level. To be here and attain that goal is very exciting and I’m just ecstatic to be here.”

Alexander was the first SEC player to be taken in the 2022 draft which was held virtually and shown on YouTube. A native of Reading, Berkshire, England, Alexander celebrated with friends and family back home in England.

The moment @tinayaalexande3 found out she was selected by the @WashSpirit! 🎉 pic.twitter.com/zScDIglqKh

“I think I see myself as a player that is free, and I like to be creative,” Alexander said when describing her game. “I’m here to get the job done. I just like to have fun and win games.”

Alexander arrived in Baton Rouge in the summer of 2017 and left her mark on the program. She leaves LSU with the 10th most points in school history, 64. She scored 21 career goals and registered 22 career assists for the point total of 64; the 22 career assists are tied for the second most in LSU history. Her seven career game winning goals also rate as the eighth most in program history.

A 2021 All-SEC First Teamer, Alexander had a career year this fall to close out her collegiate career. She led LSU in all three categories of points (24), goals (9), and assists (6). Her best performance of the season was a two goal, one assist match against No. 4 Arkansas to close out the regular season. That earned her SEC Offensive Player of the Week honors and it helped LSU clinch a berth to the SEC Tournament and NCAA Tournament.

“I’m so happy to have been a part of Tinaya’s journey at LSU,” LSU head coach Sian Hudson said. “We can’t wait to see what she accomplishes at the next level and we will be keeping up with her. She’s a special talent and such a good person to have on your team.”

Alexander also added LSWA Player of the Year and United Soccer Coaches Southeast All-Region team honors this fall thanks to her play on the pitch. She scored nine points against Sam Houston in LSU’s second game of the year as she dropped in four goals and an assist. The nine points registered by Alexander in that match were the third most ever by an LSU player in a single game.

Maybe the most impressive goal of the season was her left-footed curler against Mississippi State on September 17 from just outside the 18. It happened in front of an LSU program record crowd of 3,021 fans and it landed at No. 6 on SportCenter’s Top 10 plays of the night.

Alexander will come into a wining culture as the Washington Spirit claimed the NWSL title last month and went 9-0-3 in games they played during their 2021 campaign. She becomes the second LSU player to ever be selected in the NWSL Draft. Alex Arlitt was LSU’s first ever draft pick, and she was selected by FC Kansas City in the fourth round (No. 38 overall).