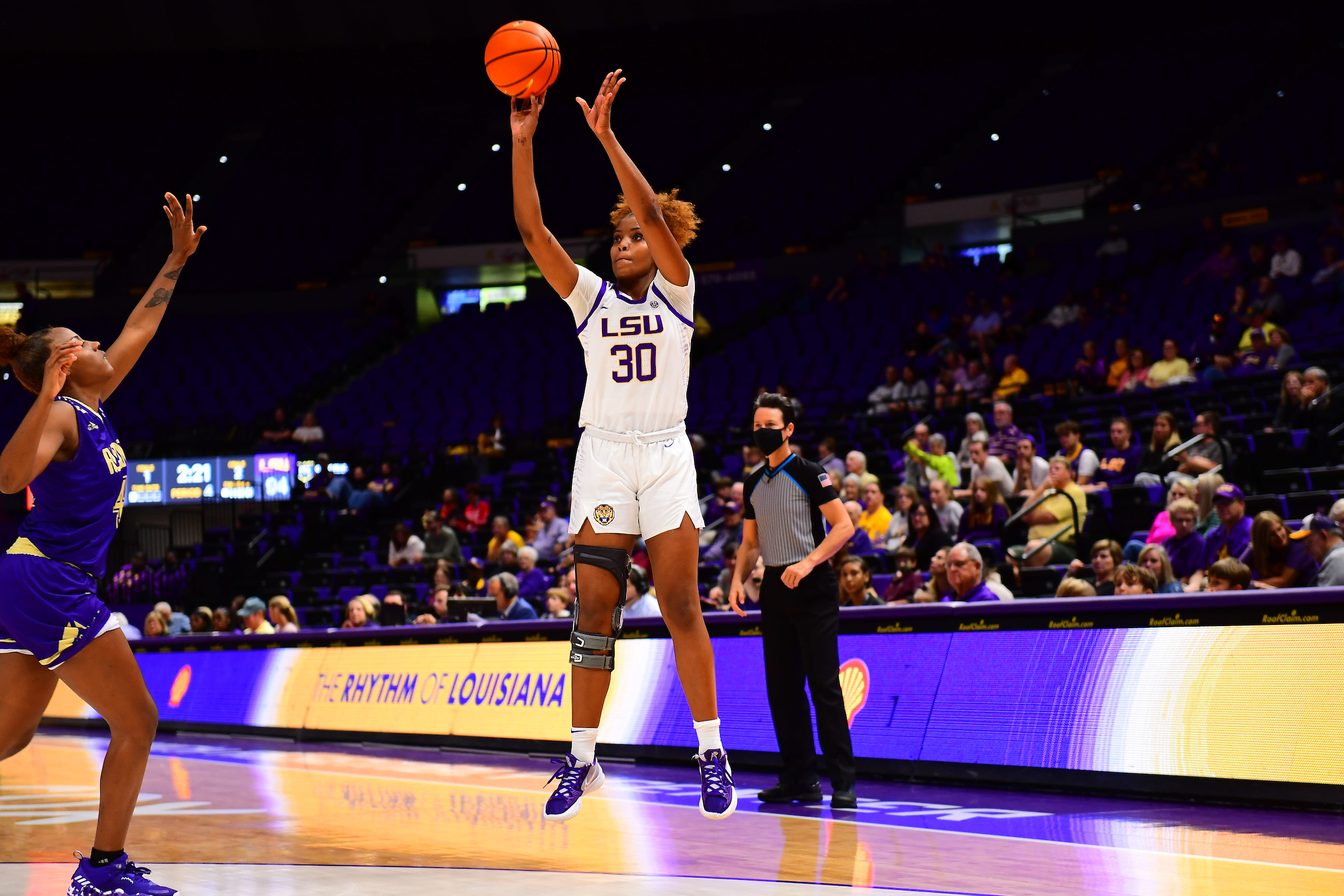 BATON ROUGE – The No. 22 LSU Women’s Basketball team (8-1) used a complete team performance highlighted by stout defense and a flurry of buckets to take down the Alcorn State Lady Braves (1-8), 100-36, Wednesday in the PMAC.

LSU scored 100 points for the first time since 2010 in a triple-overtime loss to Ole Miss. The last time the Tigers put up 100 in regulation was in 2006 against Eastern Washington.

The Tigers will be back in the PMAC on Saturday at noon CT to host Bradley. After the New Orleans game was cancelled because of health and safety protocols within the UNO program, LSU and Bradley agreed to match up on Saturday. Tickets for the UNO game will be valid on Saturday when LSU plays Bradley.

Khayla Pointer continued her dominant start to the year as she finished the contest with 19 points and 10 rebounds, her third double-double this season and seventh of her career. It was the sixth straight game she reached double-digit points. She also led LSU with 4 assists.

Other standouts for the Tigers included the likes of Alexis Morris, Ajae Petty, Grace Hall and Sarah Shemasti. Morris finished the game with 14 points off of 7-11 shooting. She has scored double-digits in all eight games she has played in. Freshmen Timia Ware and Grace Hall reached double-digits for the first time of their careers with 11 and 10, respectively, leading an LSU bench that put up 54 combined points.

The Tigers didn’t just score the ball, but they did so efficiently. LSU shot 61.3-percent from the field, going over 60-percent for the second game in a row.

LSU held Alcorn to just 26-percent shooting, tying an LSU opponent season low, throughout the night while also swiping a season-high 17 steals and forcing 26 turnovers as a team, also tying a season-high. LSU finished with 36 points off turnovers.

“When you shoot that high of a percentage, you’re going to win basketball games,” Coach Kim Mulkey said. “Defensively we held Alcorn to 26-percent shooting from the field and we also had seventeen steals. Activity. Just be Active. Win the games you’re supposed to win and win them decisively. I think we have done that the last couple of games.”

For the second consecutive game every player that saw action for LSU scored the ball.

After Alcorn State scored the first bucket of the game, LSU got rolling. The Tigers went on a 10-0 to build its lead early. Morris had six points during the run, starting the game 3-4 in the first five minutes. Cherry made her first shot attempt, returning after exiting the Iowa State game in the second quarter with an injury. The Tigers had 7 steals in the first quarter and that, along with pushing the ball when rebounding, they had 15 fastbreak points in the opening quarter. The Tigers held a 26-9 lead after one, setting a new season-high for points in a first quarter.

LSU started the second quarter on a 9-0 run, forcing the Lady Braves to take a timeout. Coming off the bench; Timia Ware, Ajae Petty and Shematsi accounted for all nine of the points prior to Alcorn State’s timeout. Grace Hall subbed in soon after the timeout and on her first possession in the game, the freshman recorded her first career steal and sank a pair of free-throws after drawing a foul on the fast break. Back in the game, Pointer reached double-digits for the sixth straight game on a lay-in midway through the second quarter. A few possessions later Morris hit a 10-foot pull-up jumper to reach double-digits for the seventh straight game. LSU held a 49-17 lead at the break, marking the second consecutive game the Tigers put up 49 in the opening half.

Alcorn State scored the first points of the half, but LSU mounted an 11-0 run early on in the third quarter to build its lead to 60-19. Amani Bartlett earned her first points of the night after grabbing an offensive rebound and going straight back up. The Tigers led 72-30 going into the fourth.

For the second consecutive game, LSU was able to go deep into its bench, holding a commanding lead. Emily Ward hit the first shot of the fourth quarter, giving her points in back-to-back games for the first time of her three-year career. Hall knocked down her third and fourth three-pointers of the year in as many tries. Shematsi also stayed perfect from beyond the arc on the season, going 2-2 from three Wednesday evening. On a free-throw with under a minute remaining in the game, Ware gave LSU its 100th point.