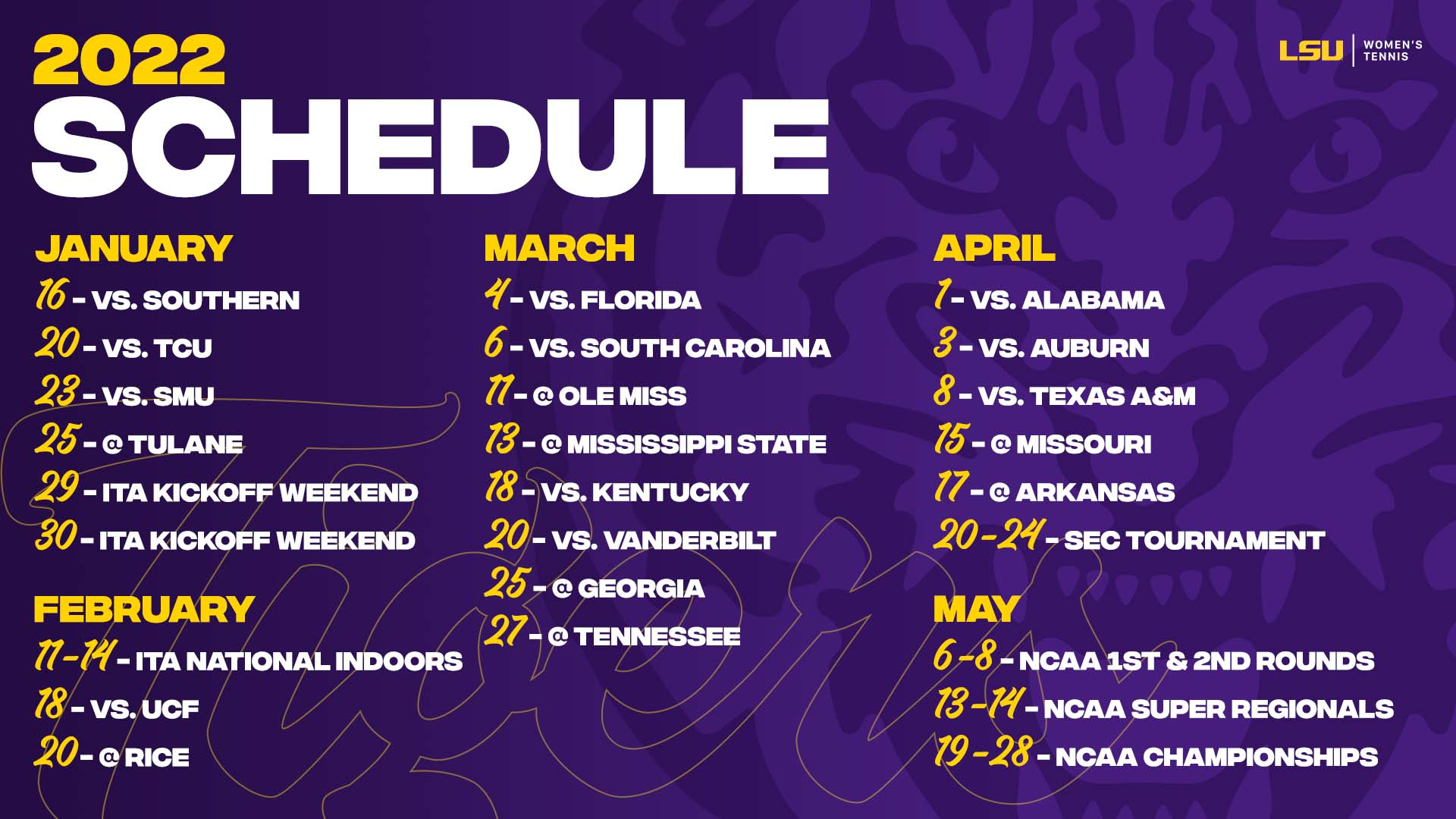 Baton Rouge, La. – The LSU women’s tennis team announced its schedule for the 2022 dual season on Tuesday morning. The 21-match season will begin with the Tigers hosting in-state opposition in the form of the Southern Jaguars at noon CT on Sunday, January 16 at the LSU Tennis Complex.

The opening homestand continues into midweek as LSU hosts TCU on Thursday, January 20 before concluding on Sunday, January 23 as SMU comes in town.

The Tigers hit the road for the first time in the season as they travel down Interstate 12 to New Orleans to take on Tulane on Tuesday, January 25. January concludes with LSU traveling to Columbus, Ohio to participate in the ITA Kickoff Weekend alongside Tennessee, Oklahoma State, and Ohio State on January 29 and 30.

Should LSU secure two wins and advance out of the ITA Kickoff Weekend, the next stop would be in Madison, Wisconsin to participate in the ITA National Indoor Championship on Friday, February 11.

Non-conference play ends with a home-and-away weekend as UCF comes to the LSU Tennis Complex on Friday, February 18, followed by LSU traveling to Houston, Texas to take on the Rice Owls on Sunday, February 20.

The Tigers will look to improve upon a fourth-place finish in the SEC from last season as they host the Florida Gators on Friday, March 4 to open conference play before hosting South Carolina on Sunday, March 6.

The following weekend takes LSU to Mississippi as the Tigers face Ole Miss on Friday, March 11, followed by a Sunday afternoon match at Mississippi State on March 13.

Friday, March 18 sees the Kentucky Wildcats visit the LSU Tennis Complex in what’s always a competitive fixture before the Vanderbilt Commodores visit for a Sunday afternoon match on March 20.

LSU hits the road on the following weekend to Athens, Georgia to face the defending SEC champions, the Georgia Bulldogs, on Friday, March 25. The Tigers then conclude the month of March with a road match against Tennessee on Sunday, March 27.

April opens with a slate of home matches at the LSU Tennis Complex as the Alabama Crimson Tide come to town on Friday, April 1, followed by a battle of the Tigers as the Auburn Tigers visit for an afternoon match on Sunday, April 3.

The final home match of the regular season sees Texas A&M visit on Friday, April 8 for the lone match of that weekend.

The regular season concludes on the road with LSU taking on Missouri on Friday, April 15, before traveling to Fayetteville, Arkansas for a match against the Arkansas Razorback on Sunday, April 17.

The 2022 SEC Tournament is hosted at the Alfred A. Ring Tennis Complex on Florida’s campus and is set to begin on Wednesday, April 20.