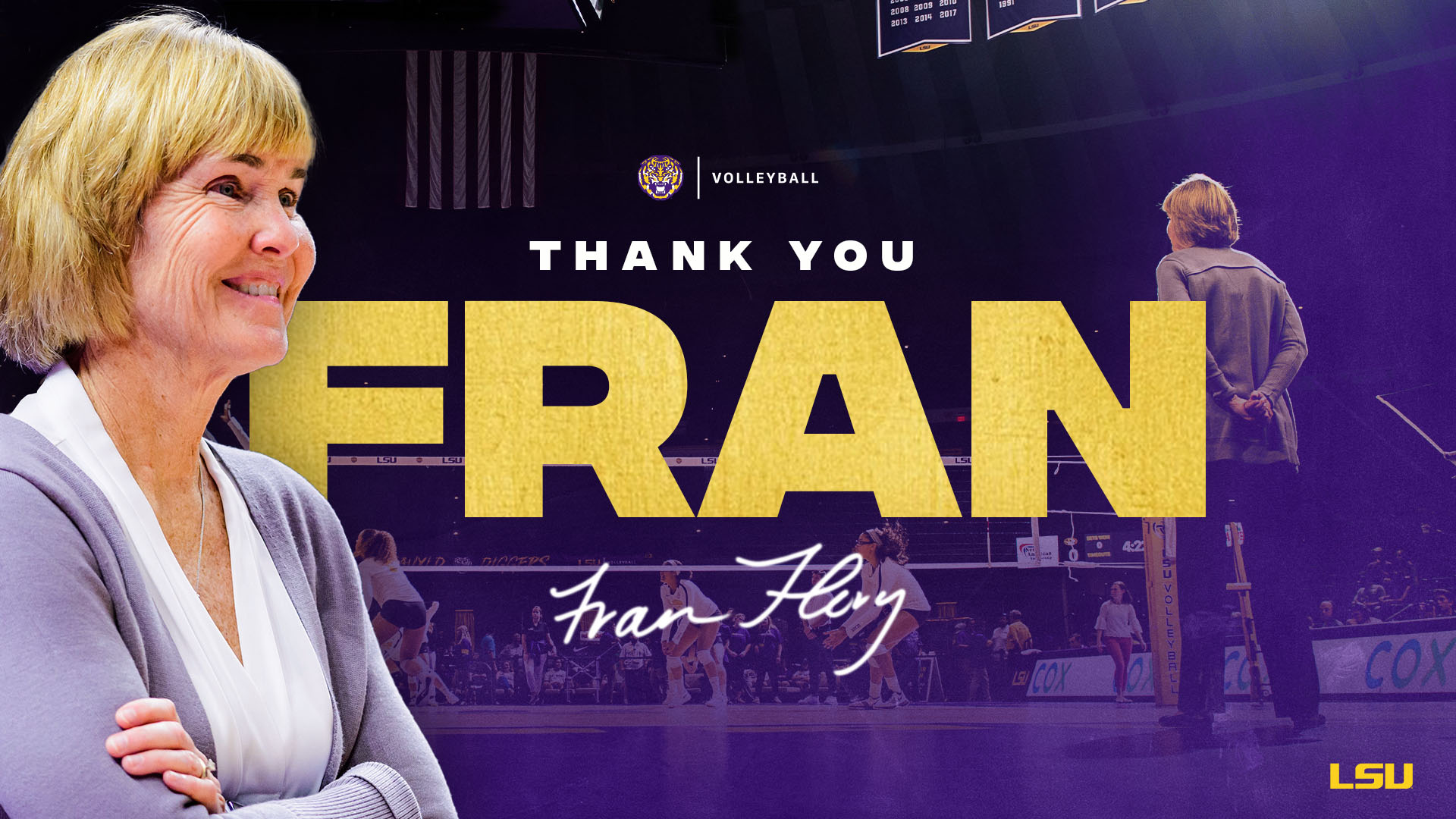 After more than 500 career wins – including more than 400 victories in 24 seasons at LSU – Fran Flory, the winningest coach in program history and the school’s longest-tenured head coach, announced her retirement Thursday.

“Fran Flory epitomizes the spirit of LSU,” said LSU Director of Athletics Scott Woodward. “Her passion for coaching and educating student-athletes is unrivaled and has never wavered. She has built a program that stands for everything that is right about collegiate athletics. Her teams have won on the court, thrived in the classroom, and transformed the community. We are grateful for her years of service and the legacy that she has left on our entire department.”

“It has been my life’s calling to coach, mentor, and support incredible student-athletes, and fulfilling that calling at a place like LSU has been a dream come true,” Flory said. “I will forever cherish the time spent, the lessons learned, and the lifelong relationships shared with the coaches, players, and staff I have been blessed to work alongside. This program and this place have unlimited potential, and though it is time for me to begin a new chapter of my life outside of coaching, I will always do everything I can to contribute to the success of LSU Volleyball and our entire athletics community.”

Flory, who first served as an assistant coach at LSU from 1988 to 1991, became the fifth head coach in program history when she returned to Baton Rouge in 1998. Since then, she has led the Tigers to 405 victories, including nine NCAA Tournament appearances, seven 20-win seasons, seven SEC West divisional titles, and the 2009 SEC Championship.

At LSU, Flory has coached 49 All-SEC recipients and 16 AVCA All-South Region selections, including AVCA All-Americans Brittnee Cooper (2007-2009) and Taylor Bannister (2017, 2019). Cooper was also named SEC Player of the Year in 2009, while Elena Martinez won back-to-back SEC Defensive Player of the Year awards in 2007 and 2008.

Flory’s success at LSU hasn’t been solely on the court. The Tigers have registered 126 SEC Academic Honor Roll selections in her tenure, and her senior classes have created and championed their own philanthropic projects to benefit the Baton Rouge community. Those projects have included partnering with the Blue Star Mothers of Louisiana to acquire household goods that were packaged and sent to troops overseas, the “Meals from Mike” initiative that collected hundreds of pounds of food for Baton Rouge area food banks, and the “Geaux Kids” initiative, which collected clothing and other related items for needy children.

A national search for Flory’s successor will begin immediately.

Coach
Mentor
Friend
Congratulations @LSUCoachFran on 400 wins on the court, and plenty more off the court! pic.twitter.com/1swyRJwLwa

“I’m honored to have had the privilege of working with Fran and to be able to call her a friend. I’ll forever be grateful for the opportunity she created for me personally and for the example that she has been in leadership and genuine care for student-athletes and coworkers. She has done more for women in sports than anyone I have ever known. Her influence on LSU Volleyball, LSU Beach Vollyeball and this athletic department cannot be understated. It’s inspiring to have watched her impact lives on a daily basis here on campus and within our community. I have no doubt that her impact will resonate indefinitely. I thank Fran for all I have learned from her and hope to honor her as her influence continues to impact student athletes on this campus. Forever LSU.”

“Fran is a true Tiger and a great human being. From the time I got to LSU I always found her helpful, kind and fiercely loyal to LSU. She will be missed by all”

“I have known Fran since she took a recruiting visit to LSU and went on to play at the University of Texas. I followed her career and have enjoyed every bit of her journey. She had been a devoted coach, mentor and friend to all who were lucky enough to know her. Fran is solid, honest and sincere. She has given so much of herself to LSU. I wish her the very best in this next chapter! She deserves a full and happy retirement.”

“Coach Flory has been a great mentor and resource since the day I got here. I appreciate her friendship and leadership these last five years. I wish her all the best in retirement!”

“Congratulations Coach Flory on a great career at LSU! Enjoy your well-deserved retirement, and I wish you all the best in the future.”

“Coach Fran is the epitome of being an LSU Tiger. I’ve always enjoyed the camaraderie we’ve shared over the last 10 years and will miss having her office a few doors down. Congratulations on retirement and the impact you left at LSU.”