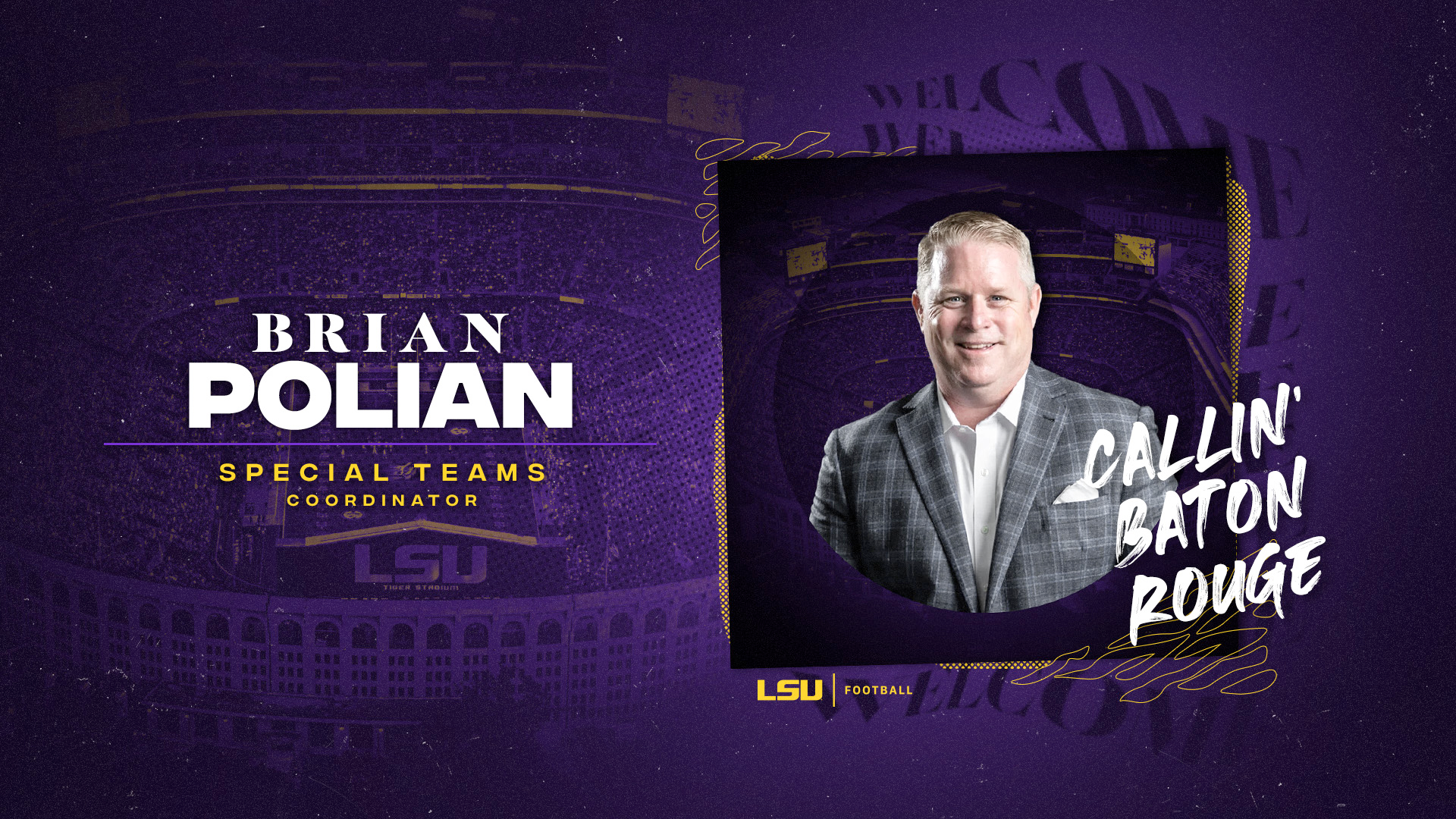 Polian replaces Greg McMahon, who announced his retirement from LSU on Tuesday.

“Brian Polian brings a wealth of experience and knowledge to our staff,” Kelly said. “He is a relentless recruiter whose special teams units routinely rank at the top of the country, and his work ethic, attention to detail, and ability to connect and communicate with student-athletes are unmatched. I know he will hit the ground running in Baton Rouge and make an immediate impact on our program.”

Polian comes to LSU from Notre Dame, where he has spent the past five years on Kelly’s staff. In those five years, Notre Dame won a combined 54 games and made two appearances in the College Football Playoffs.

“I’m honored and grateful to join Coach Kelly’s staff at LSU and work with some of the very best student-athletes and coaches in the country,” Polian said. “I share Coach Kelly’s vision for sustained excellence for LSU Football, his belief in our ability to compete for championships every year, and his passion for holistically developing elite student-athletes, and I am eager to do my part in realizing that vision for this program. My family and I are excited to begin this new adventure and to call Baton Rouge home.”

Polian, the son of longtime NFL executive and Pro Football Hall of Famer Bill Polian, is considered one of the top special teams coordinators in college football. In addition to his time as an assistant coach, he also served as the head coach at Nevada for four years, leading the Wolfpack to a pair of bowl appearances.

As part of Kelly’s staff at Notre Dame from 2017-21, he also spearheaded the Irish recruiting efforts that produced top-15 classes in 2019 and 2020 and top-10 classes in 2018 and 2021. He’s been recognized by Scout and Rivals as one of the top recruiters in the country on multiple occasions.

As special teams coordinator for the Irish, his units were consistently ranked among the best in the nation. Notre Dame’s punt coverage and kickoff coverage were both Top 20 nationally in 2019 and 2020. Notre Dame blocked four punts, returning two for touchdowns, over a two-year span in 2019-20.

Pro Football Focus ranked the Notre Dame special teams as the No. 3 unit in the country in 2019.

Individual standouts during Polian’s time at Notre Dame include placekicker Justin Yoon, who set the Irish’s record for career field goals and became the school’s all-time leading scorer, along with punter Tyler Newsome, who finished second in Notre Dame history for career punting average at 44.0.

In his first stint at Notre Dame from 2005-09, Polian coordinated special teams and also spent time coaching the Irish linebackers and defensive backs.

Polian returned to Notre Dame in 2017 after four years as the head coach at Nevada, where he guided the Wolfpack to 23 wins, including two victories over Power 5 opponents. His Nevada teams produced 26 All-Mountain West honors and numerous academic honors, including the Mountain West Scholar-Athlete of the Year and finalists for the Campbell Trophy – the academic Heisman – in Jordan Dobrich.

While on staff at Stanford, the Cardinal went a combined 23-3 and played in two BCS bowls (Fiesta and Orange). In his one season at Texas A&M, the Aggies went 11-2, beat Oklahoma in the Cotton Bowl and finished the year No. 5 in the nation.

Polian got his start in coaching as a graduate assistant at Michigan State in 1997.

Polian is a 1997 graduate of John Carroll University and he followed with a Master’s degree from Baylor in 2000. A native of Buffalo, N.Y., he and his wife, Laura, have two children.