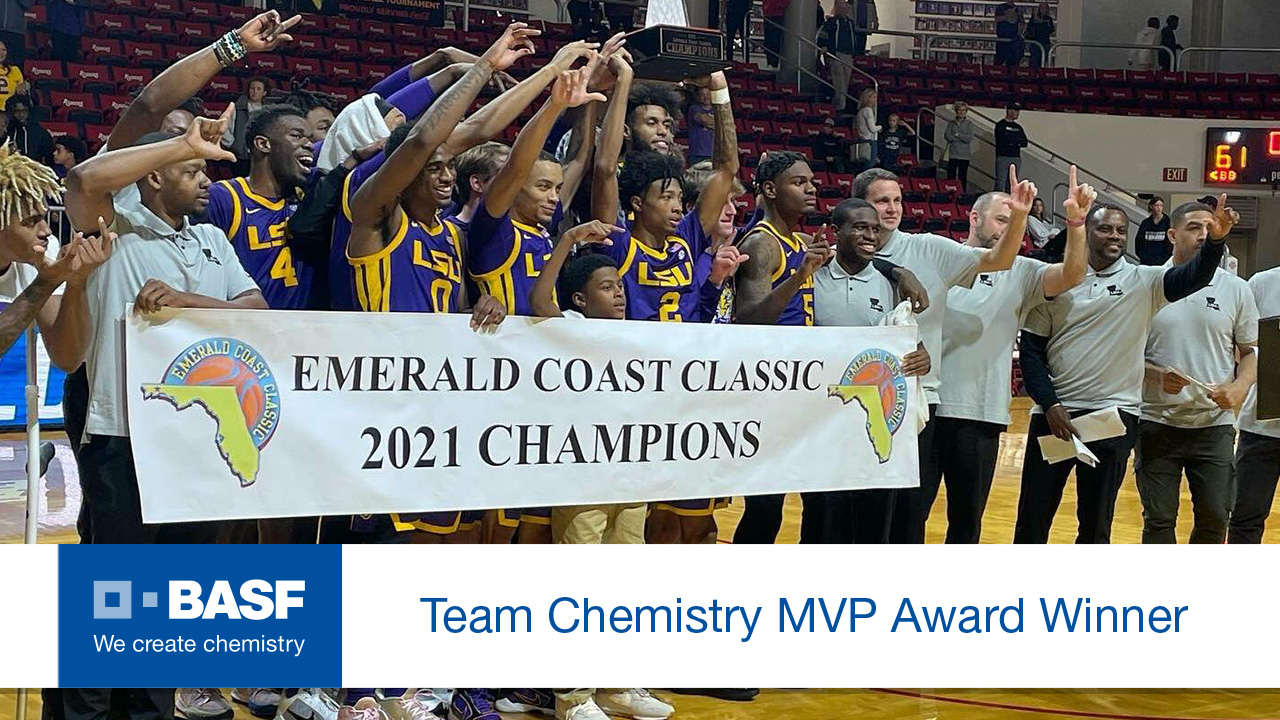 Baton Rouge, La. – Fresh off a 7-0 start and a Emerald Coast Classic title, the LSU men’s hoops team has been named the BASF Team of the Month for November.

LSU is off to a 7-0 for the first time since 2008-09, and the Emerald Coast Classic championship was the first regular season bracket tournament championship for the Tigers since 2004.

The first five wins of the season came at the Pete Maravich Assembly Center as the Tigers defeated ULM, Texas State, Liberty, McNeese State, and Belmont; all five of those home wins were 15-plus point victories. Don’t let the scoreline’s fool you, but two of those five teams are legit NCAA Tournament contenders. Liberty was a 2021 NCAA Tournament team, and the Belmont squad returned five players from a team that went 26-4 a year ago.

It all began on November 9 with a contest against ULM; the Tigers used a 26-0 run at the end of the first half in the season opener to blow out the Warhawks; the final score of the game was 101-39. Darius Days hit 8-of-9 shots from downtown en route to scoring 30 points on the night. The eight threes are tied for the third most in a single game by an LSU player.

The Tigers got off to a slow start in game No. 2 as they trailed to Texas State by five at half, but they bounced back and outscored the Bobcats by 30 over the final 20 minutes to secure the win with a score of 84-59. Days (17), Tari Eason (17), Brandon Murray (14), and Alex Fudge (14) all scored double digits in the victory.

LSU found itself in a fight with Liberty. Trailing by four with just over seven minutes left to play, the Tigers went on a 27-6 run to secure the victory with a final of 74-58 in the box score. Days paced the way for the Purple and Gold in this contest with a team high 26 points on 8-of-14 shooting.

LSU used another one of its patented runs, a 19-0 spurt, against McNeese State on November 18 to pull away in the first half; the final score wound up being 85-46. Eason posted his third double-double in four games as he collected 19 points and gathered 14 rebounds in the win.

LSU closed out it’s homestand with a dominant 83-53 victory over Belmont on November 22. LSU’s stifling defense held not only Belmont, but all five of its first opponents under 60 points. The last time that happened? During the 1946-47 season under Coach Harry Rabenhorst. LSU was efficient on the offensive end as the made 32-of-59 attempts for a season-high 54.2 clip from the field.

The Tigers gutted out a 68-63 overtime victory against Penn State on November 26 in Niceville, Fla., to kick things off at the Emerald Coast Classic. LSU forced the Nittany Lions to turn the ball over 16 times and scored 21 points off those miscues. The Tigers outscored Penn State 10-5 in the overtime stanza, and Eason had seven of those points for LSU.

Freshman Efton Reid scored 14 points on 7-of-8 shooting in the championship game versus Wake Forest. LSU handed Wake Forest its first loss of the season with a final score of 75-61. Eason was named the tournament MVP of the Emerald Coast Classic, and Days was named to the all-tournament team.

LSU begins play in the month of December tonight as they host the Ohio Bobcats at 7 p.m. CT in the PMAC.