LSU Women’s Basketball To Face Test In No. 14 Iowa St. On ESPN2 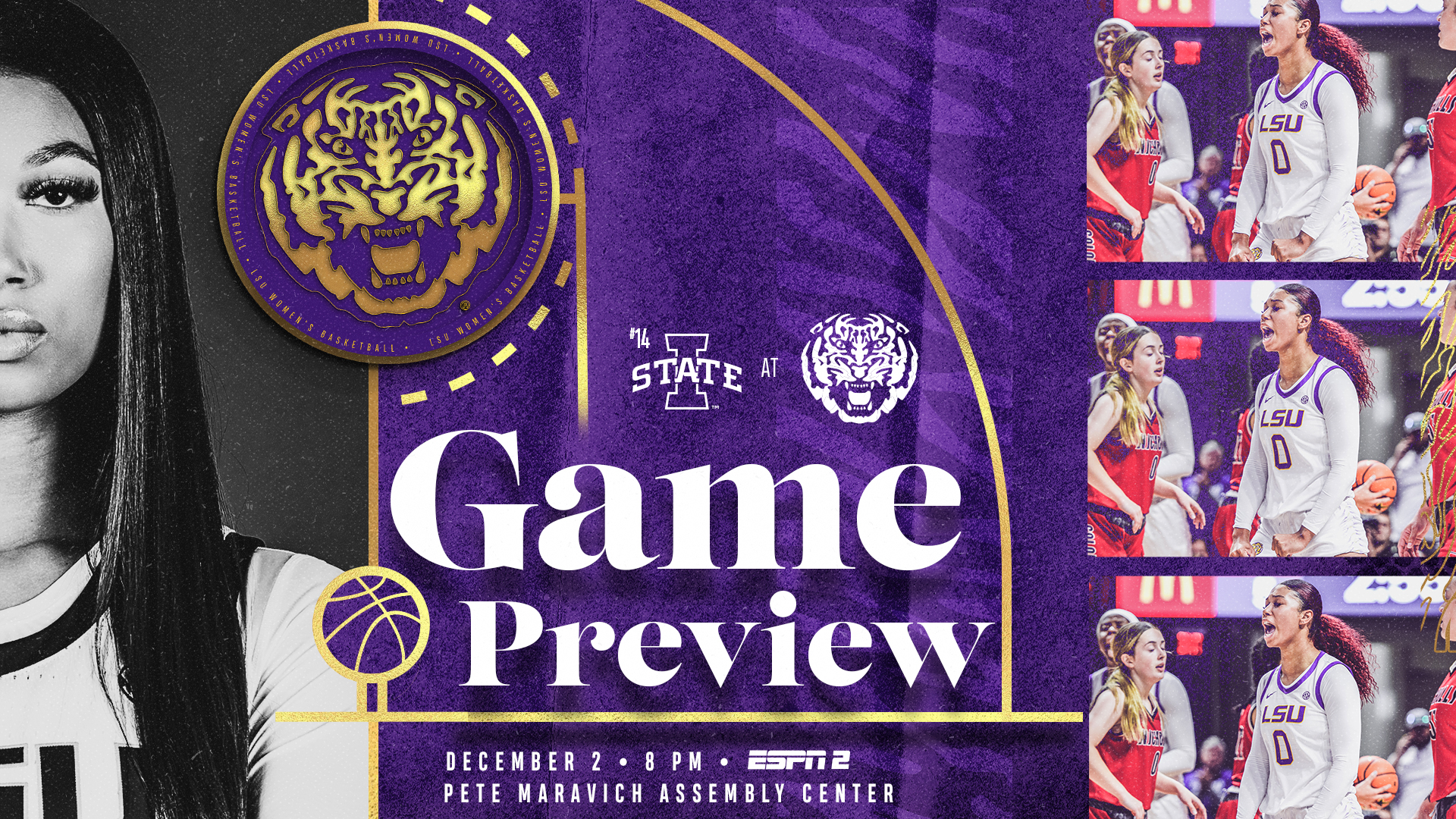 Tipoff is slated for 8:02 p.m. CT in front of a national audience on ESPN2 as Coach Kim Mulkey will lead the Tigers into battle against a ranked opponent for the first time. Courtney Lyle and Carolyn Peck will be in the PMAC to call the game. Fans can also listen to the game on the LSU Sports Radio Network, 107.3 FM in Baton Rouge.

“There’s no pressure on us,” Coach Mulkey said. “Go enjoy yourself. Go see how much we’ve improved. We’re not supposed to win the game so let’s just relax and go play the game and see what we can do, first chance on national television.”

The Tigers have shown steady improvement through Coach Mulkey’s first six game. They have won four in a row and are coming off a pair of victories over New Mexico State and Missouri State at the San Juan Shootout. After falling behind early against NMSU, guard Khayla Pointer led LSU with 16 second half points to a 20-point victory. Pointer put up 25 a day later in the 66-58 win over Missouri State, a team that has been to back-to-back NCAA Sweet Sixteens and had defeated a ranked Virginia Tech team a day earlier.

In addition to Pointer, guard Alexis Morris has shown the ability to score the ball and has reached double-digits in all five games she has played. Although Pointer and Morris are the only two Tigers to average double-figures, LSU has an important cast of players that have been growing together.

“We’re getting better in a lot of phases in the game,” Coach Mulkey said. “Taking care of the basketball, executing on the offensive end. Defensively, understanding matchups when you get caught in transition defense that that might not be who you’re assigned to, but you listen to a scouting report, and you know which way to turn this kid and you know how to guard that kid.”

Now LSU has a significant test on its hands for the SEC/Big 12 Challenge, welcoming Iowa State to town. The Cyclones have a similar style of play to that of Florida Gulf Coast, LSU’s only loss thus far, in that they are both teams that shoot the ball well from beyond the arc. Iowa State leads the nation with 12.4 made threes per game and has three players that average over three threes a game. Where Iowa State differs from Florida Gulf Coast is that the Cyclones have a greater post presence than the Eagles did.

Ashley Joens is a 6-1 guard/forward who is the defending Cheryl Miller Player of the Year. She averages 20.3 points per game and 9.3 rebounds. Her sister Aubrey Joens was named the Gulf Coast Showdown MVP last week after putting up 23 points in the championship win over UMASS. She averages 13.4 points per game. Lexi Donarski also put up 23 against UMASS and scores 16.6 points per game. Emily Ryan scores 9.1 points each game and dishes out 5.6 assists per game.

Iowa State has been good defensively too, limiting opponents to under 60 points per game. Bill Fennelly, the Cyclone’s coach since 1995, is known for changing his defenses and keeping opposing teams on their toes. Their combination of defensive versatility and offensive scoring power makes Iowa State an elite team.

“Bill Fennelly will throw every defense imaginable at us,” said Coach Mulkey who was 30-6 over Fennelly coached Iowa State teams during her time at Baylor. “It will be a sagging man. It will be a zone. It will be a triangle and two. It will be a box and one. I’ve been going against him for 21 years and he always has great shooters. They play within themselves, but boy do they expose you because they can flat-out shoot the ball.”