You’ve heard the walk-on to professional athlete story. The story of the kid who just worked hard, kept his nose to the grindstone and achieved everything he ever wanted. Well, this isn’t one of those stories. Not yet, at least. 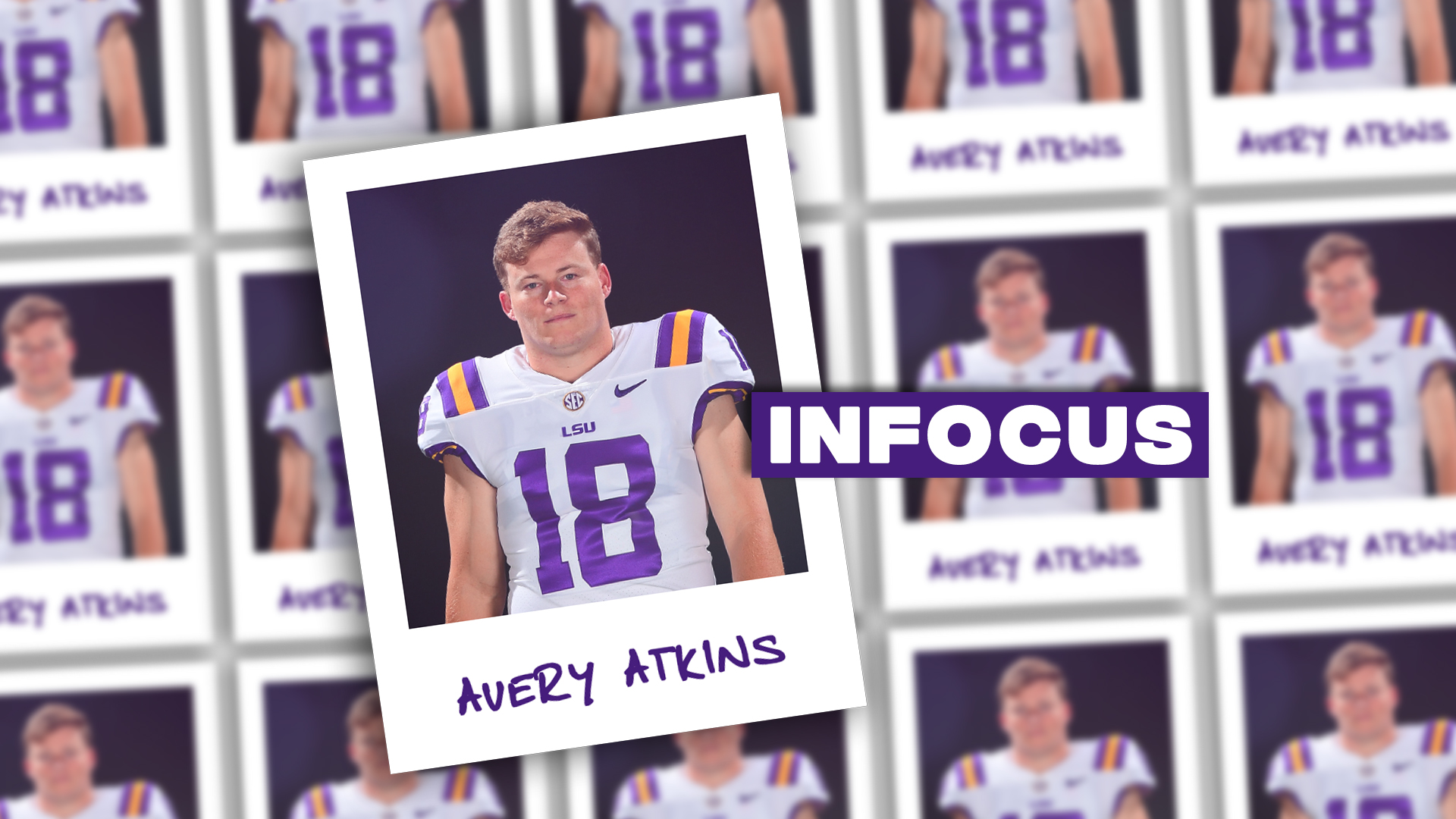 You’ve heard the walk-on to professional athlete story. The story of the kid who just worked hard, kept his nose to the grindstone and achieved everything he ever wanted.

Well, this isn’t one of those stories. Not yet, at least.

When Avery Atkins gets dressed for football games on Saturdays, he puts on a jersey with the coveted No. 18 stitched across the front and back. No. 18, in LSU Football lore, represents a leader, someone who never backs down or shies away from adversity.

The 6-0, 218-pound placekicker and punter has a career total of six tackles. That might not seem like a significant number, but think about it. When was the last time you saw a kicker make the tackle after he just kicked off?

“It’s just a mindset,” Atkins said. “When I played high school football, I played in the biggest league in Alabama. I was going up against D-1 recruits every day.”

Atkins lined up at safety in high school, something he doesn’t do now, but the skill and courage has never left him.

“When I’m kicking off, or punting like this year, I know I can tackle the returners. I know I’ve done stuff like that before, so I’m not really scared of them,” Atkins explained. “I think some kickers usually get scared of it. For me, it’s the mindset and the pride of not letting someone get past me.

“I’m the last line of defense, and that’s what a safety is. It’s something I’ve done before, and I’m comfortable with doing it,” he remarked, always willing to step up where needed.

In 2018, his freshman year, he played every game that the Tigers did and the longest return allowed on one of his kickoffs was 36 yards. In 2019, that number went down to 33 yards. That same year, he led the nation in total kickoffs and finished third in the country in touchback percentage (83.97).

Atkins grew up less than 450 miles from the bright lights of Tiger Stadium, but it wasn’t until he came here himself that he knew this was the place he needed to be.

“I was down to a few schools:  LSU, Michigan and Yale,” Atkins said. He also had an offer from Harvard. But, Atkins credits former Associate AD Sam Nader, head coach Ed Orgerson and special teams coach Greg McMahon for getting him to LSU.

“Once I met them and sat down and talked to them, then I toured the whole place,” he said about his recruiting visit in January of 2018, only a month before signing day, “it was pretty much an easy decision.”

Atkins walked on and spent his freshman year proving himself. Not once did one of his 79 kickoffs go out-of-bounds, and he set the school record for touchbacks at 71.

“I knew and I had been told from previous kickers and coaches that before I got here, there had been issues with kickoffs going out-of-bounds,” Atkins commented. “That was something we focused on a lot and something I was proud of at the end of the year.

“It’s consistency — trying to hit a touchback every time, making sure the ball has good hang-time and good flight.”

Humble as ever, he pointed out that “there were times where I would hit a bad kick but it would go more straight down the field, rather than angling toward the sidelines.”

Avery Atkins’ passion and drive on the field is rivaled only by his own work off of it. He is a three-year member of the SEC Academic Honor Roll and a graduate with a degree in Kinesiology. He’s already taken the MCAT, the entrance exam for medical school, and begun applying to medical schools.

“I really wanted to be more than just ‘Oh, he’s a football player’ or ‘he’s just one of those athletes,’” he said. “Specifically academic-wise, I knew coming into LSU that my plan was to go to medical school.

That’s something I’ve always wanted to do if the NFL didn’t work out, medical school is where I wanted to go. I knew coming in that academics were going to have to be a big part of that.”

Atkins is also involved in the LSU Student-Athlete Advisory Committee (SAAC), as the Co-President with volleyball player Jill Bonnet. SAAC serves as a medium for communication through which student-athletes, SEC administrators, institutional representatives, and coaches discuss and take action on important issues.

Clearly well-rounded, when asked how he got that way, Atkins attributed keeping his nose to the grindstone, along with some solid mentors.

“Other attributes just come from hard work. There were people here when I first came here like (former LSU long snapper) Blake Ferguson who kind of showed me the ropes, showed me how to lead and what to do. Credit to him,” Atkins acknowledged. “Like I said, I wanted to be more than just a football player when my time is done here.”

Atkins knows that being so involved is a large undertaking, but he takes immense honor and pride in it, knowing that he was once an athlete that needed to have someone speak for him.

“I know that there are athletes out there that want to say something but don’t necessarily know how to go out and say it. That was me my freshman year,” Atkins said. “If there was ever anything I wanted to say, I didn’t really know what to do or how to do it.”

The Auburn, Ala., native has come a long way from being a walk-on that didn’t know how to have his voice heard. In fact, he’s engaged to his high school sweetheart, Ann Archer.

In the end, if the NFL doesn’t work out and this doesn’t become one of those stories, it won’t matter that much. Avery will go to medical school, become a doctor and start a family with the love of his life.

And through it all, he will have impacted hundreds of student-athletes and countless fans that saw him play and live as one of the greatest examples of hard work and humility to pass under the LSU “Win” bar.